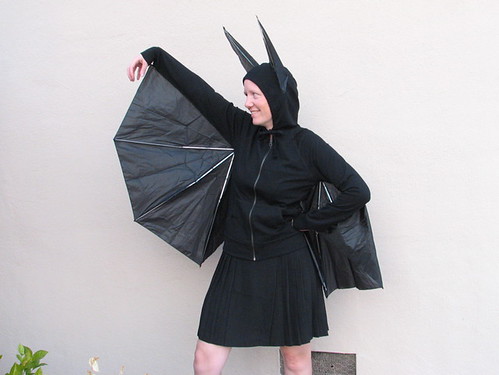 Halloween is coming right up, so it is time to post one of our favorite costumes to help get everyone in the spirit. This is a darned good looking bat costume you can make from a hoodie and an umbrella.

Yes, similar costumes have been made before. Even Martha‘s done it. However, our version is better.

Forget instructions that call for elastic harnesses and throwing out the “insides” of the umbrella. You don’t need elastic, and the umbrella parts are absolutely essential. Those extra ribs make extra big bat ears. The only raw materials that you will need are an umbrella and a hooded zippered sweatshirt. You will also need some tools and supplies: needle and thread, pins, pliers, scissors, and something to cut the umbrella ribs, such as tin snips, bolt cutters, or cutting pliers. 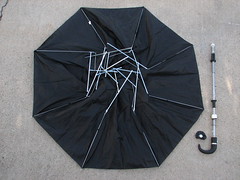 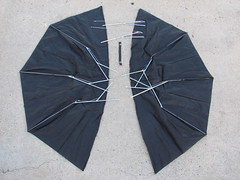 The cloth part of the umbrella with the ribs attached should be separate from the stem now. Clip off two ribs opposite each other, and save them for ear frames. Split the umbrella in half down the seam previously occupied by those ribs. Using tin snips (or other cutters), cut off extraneous rib parts so that the ribs will be slightly longer than the fabric when they are joined together. If you have pointy bits sticking out, you can tape them down. 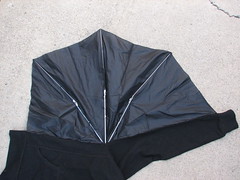 Trim off the extra flaps of material straight across from the bottom of the sweatshirt to just before the point where the bottom rib is attached. You’ll need these triangles of material for the ears. 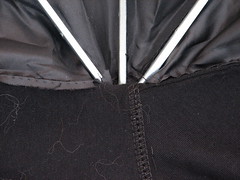 Here’s the gap where the ribs stick through. This will give you some flexibility of movement when you’re wearing it. 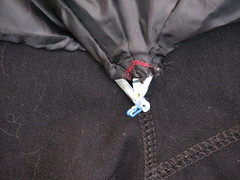 Use the wires that were holding the ribs together (or any other convenient wires, string or thread) to tie the three rib ends together. 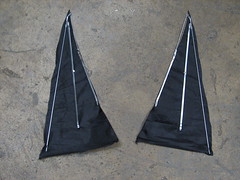 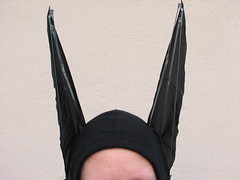 You’ll need someone (or a wig frame or mannequin head) to help you with this part. Getting the tripods into just the right triangle for ears may require repeated tries. My personal voodoo doll yelped several times as I adjusted them. The key is that the middle one needs to be set quite far back. The outer two need to be approximately in line.

After getting them nicely lined up, stitch them on and then trim off the excess fabric.

Your top is ready, serve with matching shorts and/or miniskirt (or alternate dress appropriate to your climate) and you are now ready for trick-or-treating.

Important safety tip: Do not attempt this with your new costume.

You can find more costume projects in our Halloween Project Archive.

This entry was posted in Costumes, EMSL Projects and tagged diy, Halloween. Bookmark the Permalink.

19 thoughts on “How to Build a Better Bat Costume”