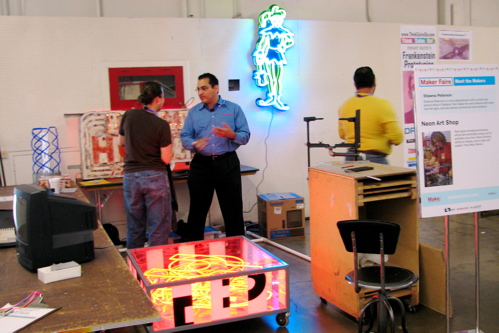 I am one of the evil mad scientists from Evil Mad Scientist Laboratories. I am approximately 11.75 years old. I am also one of the co-creators of the LED dining table. I would like to tell of my experience at the Maker Faire.

I was only at the Maker Faire on Sunday; I had just gotten home from a vacation in Oregon. My mom gave me a crew badge since there were no more maker badges left. She took me to our booth. On the way to our booth, I saw a glassmaker from the Crucible and a fireball machine.

Windell showed me around the Maker Faire. We saw a Toyota Prius that had been converted to an electric car. We saw insects with blinky eyes that looked fun to build. We saw neon sculptures. We went extremely close to a fireball machine. We saw computers powered by french fry oil. There was a huge giraffe sculpture covered in LEDs. Windell pointed out Steve Wozniak, one of the founders of Apple Computers, playing Segway polo.

We got some LED throwies. An LED throwie is an LED connected to a battery with a magnet wrapped in tape. Windell and I built three LED throwies. I really liked seeing the Crucible and their fireball machines. It was really fun seeing a geyser of fire shoot up in the air every few minutes. The Crucible is a group of people who, among other things, teach kids to weld, braze, and cut with a blowtorch. They have a really cool transport: a fire truck.

After the Maker Faire, I had a near disaster with an LED throwie. I left one in my pocket and it went through the wash. Fortunately, nothing exploded and everything but the tape survived.