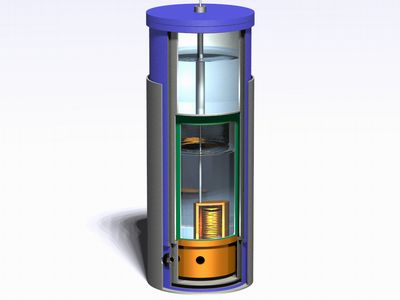 From 2002-2005 I worked in the NIST Time and Frequency division on a next-generation atomic clock.

The clock is based on a single trapped mercury atom. The most significant result of my work on the clock was a dramatic improvement in its precision, and the report on this progress was finally published this week.

Read an article from Science News about the paper, or one from Seed Magazine.

The article published this week appeared in Physical Review Letters. You can actually read the paper here, redistributed by NIST. There has been a little bit of press and web coverage of this result, although it mostly seems to be derived directly from the press release.

This was also a front-page story on Slashdot this week. I’ve always wanted to have a story on slashdot. =)

The image shown here is a cut-away drawing of the cryogenic vacuum chamber system that holds the mercury ion trap. The two tanks of liquid are liquid nitrogen (top) and helium (bottom). The ion trap itself is located in the lowest part of the drawing, a large copper cylinder. I made the drawing in POV-Ray.

This entry was posted in General News, Science and tagged clocks, science. Bookmark the Permalink.