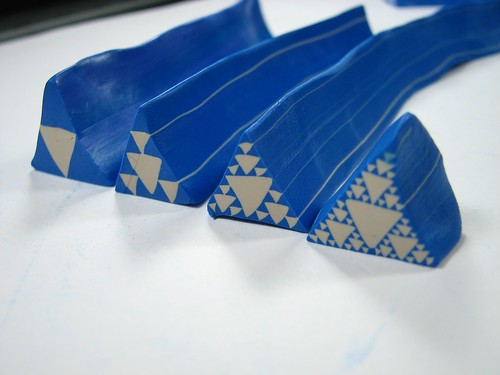 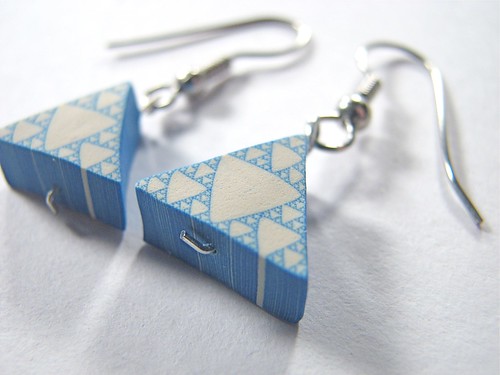 One of our favorite shapes is the Sierpinski triangle. In one sense, a mere mathematical abstraction, on the other, a pattern that naturally emerges in real life from several different simple algorithms. On paper, one can play the Chaos Game to generate the shape (or cheat and just use the java applet).

You can also generate a Sierpinski triangle in what is perhaps a more obvious way: by exploiting its fractal self-similarity.

Beginning with a single triangle, replace that triangle with three half-size copies arranged so that their outer border form a new triangle of the same size as the original. Then, replace each of those three triangles with three triangles half that size, and so forth. (Turns out of course, that the fractal pattern is due to the algorithm of shrinking and positioning the shapes, not due to the fact that the initial shape that we began with was a triangle– any plane figure can be used.) This algorithm is easy enough to implement directly and physically, using a flexible medium like polymer clay. 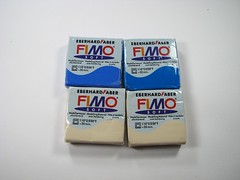 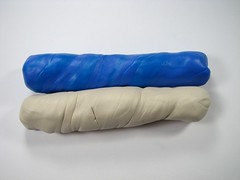 We begin with a few packages of polymer clay– two colors of Fimo Soft, in this case. (It’s a common oven-hardening material that you can get at craft and art supply stores. Overused in some contexts, but still has its uses.) Knead it until it’s actually soft and workable, a few minutes. It turns out, for the color pattern that we are using, that we need a lot more of the beige than the blue. 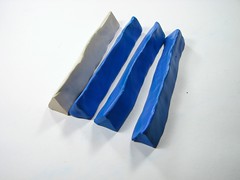 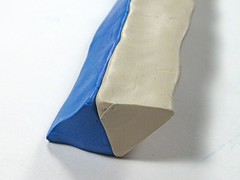 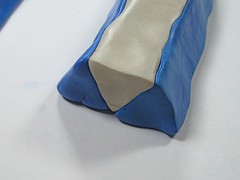 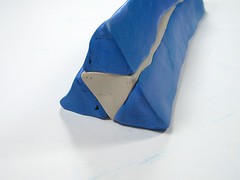 Form the two clay colors into long triangular shapes. The cross section of each should be equilateral, with side length near 1/2″ to 1″.
Using a knife, cut three equal-length sections of the darker color and one equal length of the lighter color, ideally using less than 1/8 of your total supply of the light color. Mate the three dark pieces to the sides of the light piece, carefully matching them edge to edge and avoiding air gaps to the extent possible. The stack, as presently assembled, is the first iteration of the Sierpinski triangle, with a total of three dark triangles. 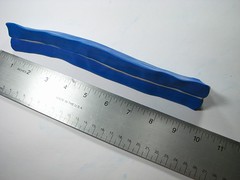 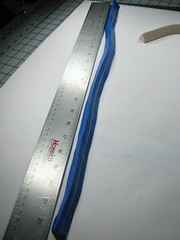 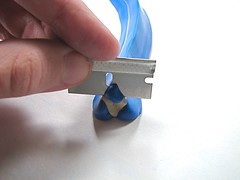 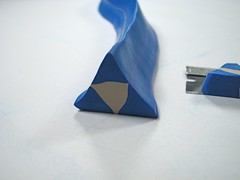 Press the stack of triangles together to make sure that the edges fuse well. Carefully and deliberately lengthen the triangle to at least 4 times its original length, taking care to preserve the triangular shape and keep the size of the cross section uniform along the whole length as you reduce it. Using a sharp knife, trim off the rough edges, which may not preserve the cross section as well as you would like. 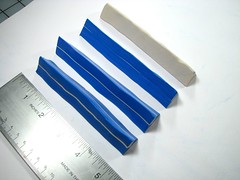 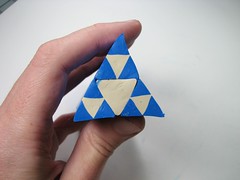 Cut the stretched “first iteration” piece into four pieces of equal length. Set one of the four pieces aside so that you will have a piece of “first iteration” material when you are done. Make a triangular prism out of the light colored material that matches the shape and size of the three main pieces, and again mate the three dark pieces to the sides of the light piece. The stack is now a realization of the second iteration of the Sierpinski triangle, with a total of nine dark triangles. 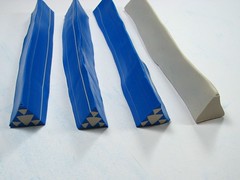 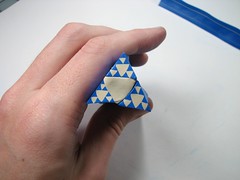 Again stretch the result from the previous iteration, cut into four pieces of equal length and set one aside. Make a new light colored prism the size of one of the quarters, and mate the three dark pieces to the edges of the light colored piece. The third iteration, shown here, now has a total of 27 dark triangles. 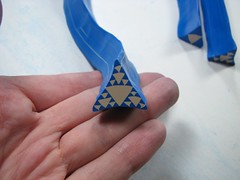 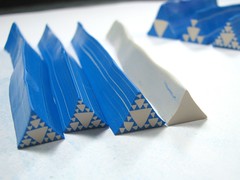 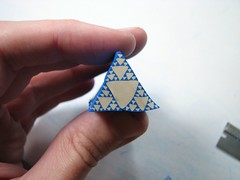 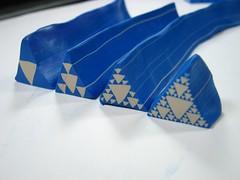 By now, you should have the hang of the iterative algorithm for making the fractal. Again, stretch and cut the result from the previous iteration, and mount it to the sides of a new light-colored prism piece. The fourth iteration, lower left, has 81 dark triangles. On the lower right you can see a piece of fourth-iteration material next to the set-aside pieces from the first three iterations. 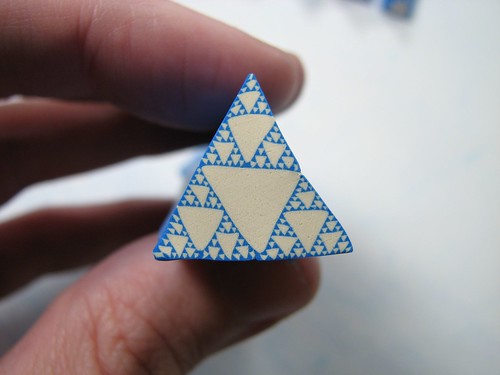 The fifth iteration has 243 dark triangles. Starting to get interesting, no? 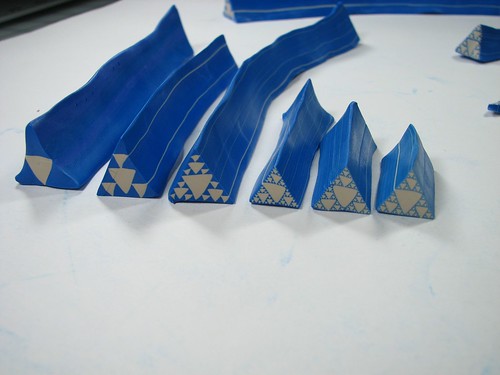 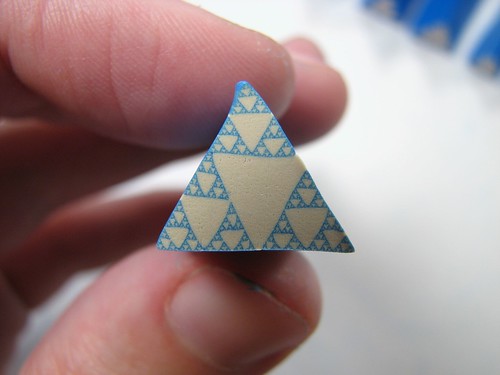 By the time that we get to the 2187 triangles of the seventh iteration, we begin to reach the point of diminishing returns; it becomes harder to see the wispy blue lines that remain, and be begin to lose contrast. Using a color combination with better yet contrast might make another iteration or two more impressive. 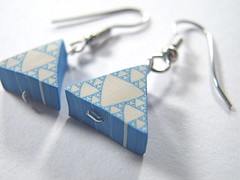 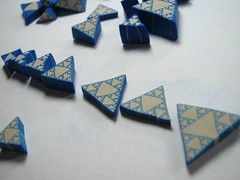 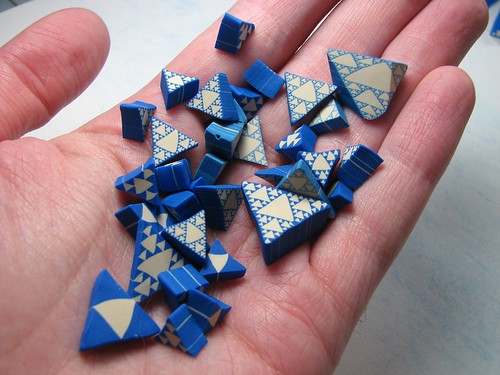 The next step is to cut, drill, or otherwise prepare the material as desired and bake to harden the clay. The set of earrings was made with the sixth iteration material, with its great detail and contrast. A set of little tiles showing the different iterations also makes a great little handful of fractals. (You can see more pictures of this project and our results in this photo set.)

These, and the process of making them, are great visual aids for iterative processes, fractals and self-similarity.

This construction process is certainly one that could be adapted to iterate slightly different generating functions; it will be interesting to see what else can be generated by this method– What kinds of fractals can you produce in clay?

This entry was posted in EMSL Projects, Mathematics and tagged diy, fashion, math. Bookmark the Permalink.