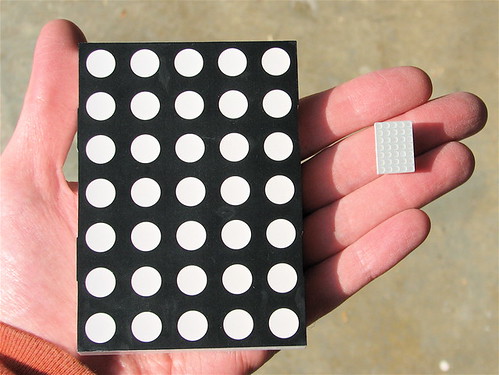 Mike Kash, my physics professor at Lake Forest College, once said that he liked matrices “so much that I sleep on one.” The two
5×7 LED matrix displays shown here have pointy plastic edges and are probably not very comfortable to sleep on.

These displays are both alike in character, with the same potential to display thirty five beautiful and well-resolved pixels of bitmappy goodness. That’s just the thing for the new video standard that I’m proposing: Widescreen Ultra Low Defintion, or WULD for short. (HDTV is for wimps. 128-bit video may spark a format war with WULD, but widescreen it is not.)

It is fun to contrast the remarkably different sizes of these two displays. The one on the left is from a large readerboard, and is four inches tall with 10 mm green LEDs. The dots are almost as big as the entire miniature version, shown on the right with its 3 mm red LEDs. More common than either of these sizes are the two-inch 5×7 displays that populate the readerboards sold at office supply stores.