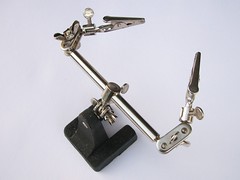 If you are handy with a soldering iron, you’ve probably come across one of these ultra-handy soldering tools. It is various known as a
third hand soldering tool, a set of helping hands, or, as it was introduced to me, as “Mr. Hands.”

Mr. Hands is a great guy to have around for holding a small circuit board or for holding two wires against each other. He provides a third (or even fourth) hand to hold things and prevents your fingers from getting burned. There are all sorts of clever mods that you can perform to them, and they are very cheap– typically $2-$6. You can also make your own equivalent with the same kind of budget, which is good from the standpoint of being able to choose different designs. (I’m partial to the alligator-clips-on-big-fat-wires method, myself.)

The only weakness of Mr. hands is, well, weakness. He’s small, can’t hold heavy or big things, and probably got picked last for kickball. And if it starts to cause a problem, then that’s when we bring out Big Daddy Hands, shown here with Mr. Hands for scale: 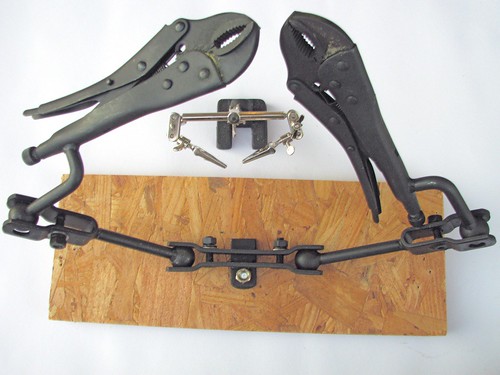 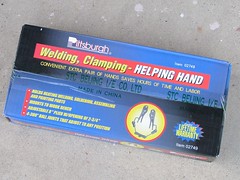 Big Daddy Hands, well, most of him anyway, comes in a $20 box from Harbor Freight, that bastion of barely acceptable manufacturing standards that we have all come to know and love.

They refer to this as the Helping Hands Welding Jig, or as it says on the box, “Welding, Clamping HELPING HAND.” Fair enough. 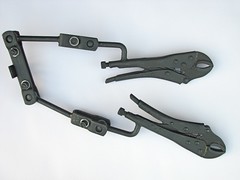 Out of the box, he’s a little bit icky, and needs some excess grease wiped off.There are two low-end vise-grip type clamps welded with four ball joints. A hex wrench is used to adjust the setup, and the four adjustment points allow nearly any type of angle that you might want.

The only problem is that this is designed to be mounted on a bench top. However, there’s no reason that it can’t be made into a giant, portable version of Mr. Hands instead. 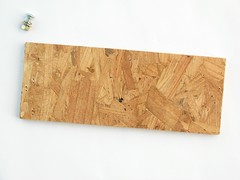 Drill a 3/8? hole through the wooden base to fit the bolt. 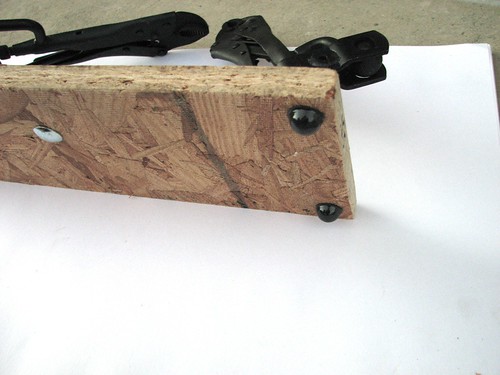 From the bottom, put the bolt through the board and then through the mounting hole in the base of the big hands. Put the nut on top and tighten it to affix the hands to the board. It won’t yet stand up on its own, because the bolt pokes too far through the bottom.

Add the rubber feet and you’re done. The feet need to be tall enough that the center bolt doesn’t hit ground. 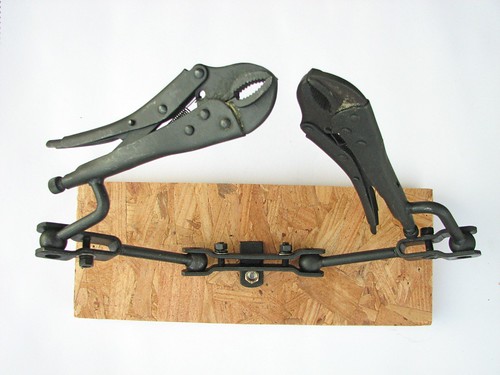 And that’s it. Big Daddy Hands is ready to rock and roll, joining Mr. Hands on your soldering kit tag team.

This entry was posted in EMSL Projects and tagged tools. Bookmark the Permalink.