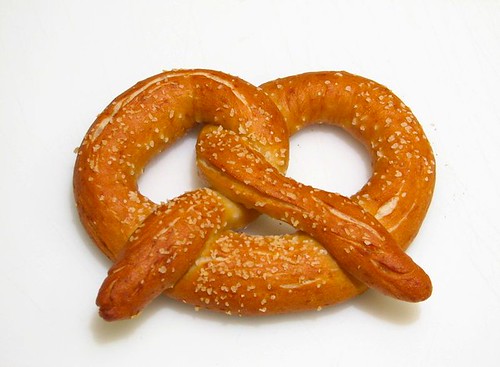 This is a pretzel, and if you were asked what shape it was, you would probably say it was pretzel shaped. But (by definition) all pretzels are pretzel-shaped. Here are some other pretzel shapes that are a little less common: Pretzels for musicians, writers, gardeners, mathematicians, capitalists and Mac fanboys. 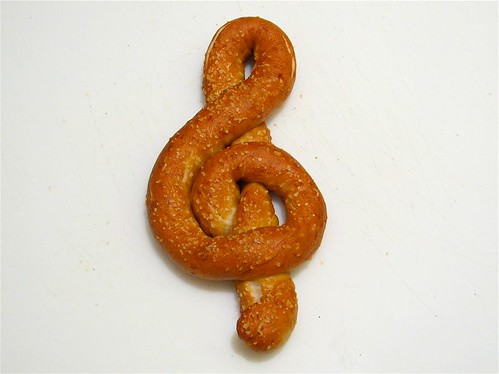 First off, there’s the treble clef, which stands on its own as an interesting pretzel shape. While music geeks might prefer something more esoteric like a bass or alto clef, the treble clef is not only more recognizable but is also more structurally stable– we’ll come back to that point a little later. 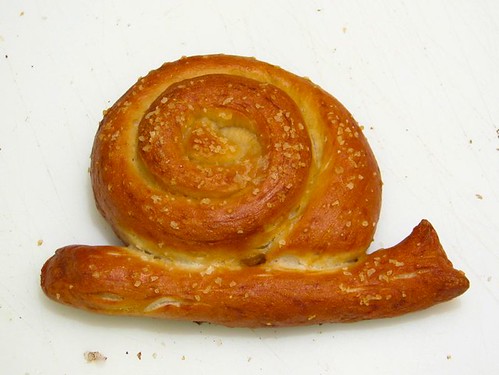 For the gardener, we have a snail pretzel. It looks a bit like the Slow Food logo, which is fine since it’s food, and it’s not going anywhere. 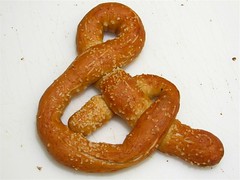 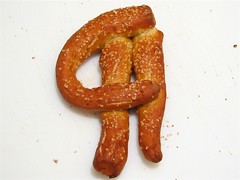 There are plenty of typographical symbols that lend themselves to pretzelization. (Yes, “pretzelization” is a word, at least according to the cat.) Here, we’ve pretzeled the ampersand and paragraph symbol, which is apparently called a pilcrow. As you can see, both shapes have become a little bit distorted in the cooking process– that is an unfortunate occupational hazard. 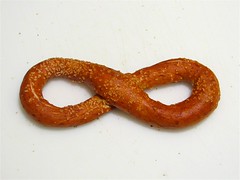 Quite a few possibilities are open to the mathematician, some of which might be lost on the average mustard-loving pretzel eater. For example, you might consider making an integer double-struck-Z symbol (?) but the shape isn’t really sturdy enough to make a great pretzel.

We settled on the simple infinity symbol, but there are probably better choices; you can leave your suggestions in the comments below. 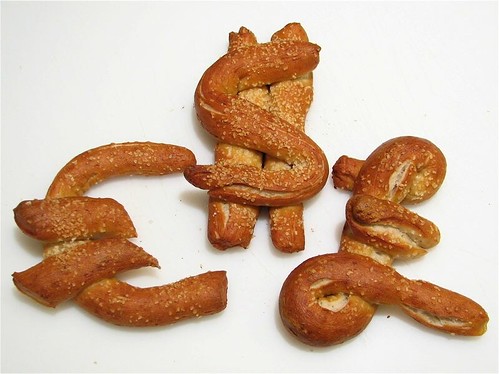 Depending on where you work, these might be the perfect pretzels for your office party. There are lots of other types of currency, and you could probably make pretzels for each type. Here’s an idea: you could make a pretzel version of the traditional currency from yap; you could call it a bagel. 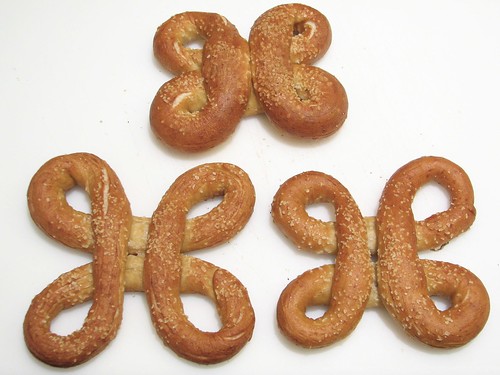 And yes, pretzels for Mac fanboys! These are modeled after the Macintosh command key symbol, which was derived from a sign in a Swedish campground. These were excellent, and next time that we make pretzels we might make them all in this shape.

To make these pretzels, we used the soft pretzel recipe from Baking Illustrated. It begins with a stiff yeast dough made with a lot of honey. It’s left to rise for a couple of hours before being shaped into ropes and then into pretzel shapes on cookie sheets. It’s a very elastic dough, so that rolling step takes some work. The recipe is a traditional one that involves an uncommon step: boiling the shaped pretzels briefly in water laced with baking soda. 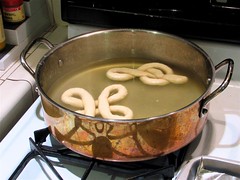 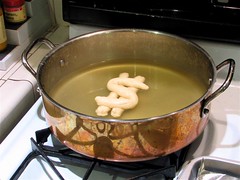 Boiling the dough in water produces that perfect bagel-like surface texture and the baking soda causes the surfaces to darken very quickly in the oven. It also leads to one of the most surreal things that you’ll ever see in the kitchen: common symbols like those here being cooked on the stovetop. 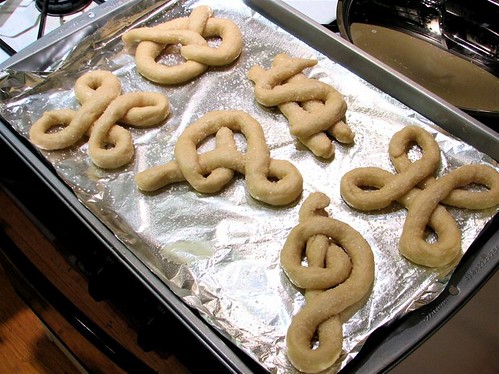 After boiling, the pretzels are returned to the cookie sheet, sprinkled with kosher salt, and baked. The bake is fairly short, but they darken very quickly because of the baking soda .

One of the things that I had not previously appreciated about pretzels is that the traditional shape serves an important purpose, maintaining the structural integrity while they are boiled in water. Even though the rolled out ropes of pretzel dough are only about half an inch in diameter, the pretzels can be quite sturdy if the ropes are overlapped well. The command-key symbol, the treble clef, the ampersand, and the dollar sign have excellent overlap and were very easy to work with. Simpler shapes, like the pound sign and euro were harder to flip in the water. Designs, such as the snails, that have little or no overlapping parts are only barely viable, and tend to fall apart in the boiling step. However, go ahead and be adventurous in your design– the worst that will happen if your pretzels fall apart is that you’ll end up with a few extra soft pretzel sticks. (Yum.)

This entry was posted in Art, Play with your food and tagged art, food. Bookmark the Permalink.

9 thoughts on “Play with your food: Pretzels for fanboys”