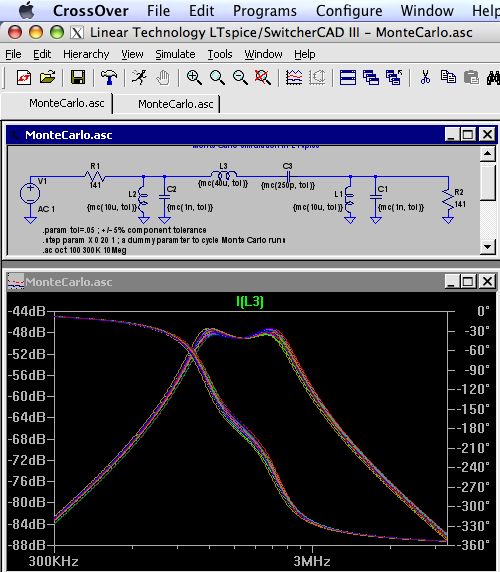 One of the nice things about having an Intel-based Mac is that you can, in principle, run a variety of operating systems including Microsoft Windows. You can do this using Apple’s Boot Camp utility, or through virtual machine programs such as Parallels.

I recently came across an esoteric “Windows only” electrical engineering program that I wanted to run on my Mac (LTspice/SwitcherCAD III — more about that later). And, while contemplating the $200-$300 cost of a legitimate Windows license, it might occur to you that the goal in this case is to run a program that runs under Windows– not actually to run Windows itself.

So why not look at Wine? Wine is a venerable software compatibility layer that allows unix-like operating systems to run programs designed for Windows. It turns out that there is even a Parallels-like virtualization environment so that you can run programs programs in Wine alongside Mac programs. It’s called Crossover Mac, and it’s $60 from Codeweavers.

And the verdict? It’s not for everyone, but it’s a great start.
Working with applications that run under Crossover is nearly transparent. You install new programs the usual way– e.g., download and double-click the “.EXE” installer. From then on, you just double-click your program in the Finder to open up your application. It runs in its own window just like any other program does. And, the very best thing that you can possibly say about a program like this is true: It is easy to forget that you are using it.
Naturally the menus of Windows apps remain attached to their windows– but that’s life in windows-app land. (There is a big gulf between running well and running fully native.)
Codeweavers also makes a version for Linux, bringing a simple transparent Wine compatibility layer to that platform as well.

The down side of course is that not every Windows program will run correctly in the Wine environment. (Note: All the ones that *I* tried happened to work just fine). To address this, the developers maintain a ranked database of programs tested with Crossover.
A handful of programs are “officially supported” to run under Crossover (Microsoft Outlook, Half-Life 2, Quicken, … ) and a few dozen others have been tested and shown to work just fine. There is also a longer list of programs that work albeit with minor issues and a genuinely short list of programs known to not run at all.

One thing that is abundantly clear is that there isn’t any report yet for the vast majority of programs. What they really need are more users to help to try out programs and rank their performance, and to help the developers find bugs that they can squash. Again, this isn’t for everyone. How can you know if your program will work if it isn’t yet on the list? You can download a 30-day free trial version (with registration– spamless, in my experience), which is unrestricted except for the expiration date– sufficient time to make sure that it works with that one esoteric program that you want to use. If you are willing to help Codeweavers beta test– by becoming an advocate for a particular piece of software, you can even get free access to the latest CrossOver software. That’s something to think about if want to do your part in the open-source community, save a few bucks, or if the software that you really really want to use doesn’t work just yet.

Now, there are two commercial, popular, and well-supported windowing environments that let you easily run Windows applications alongside regular Mac applications: VMware Fusion and Parallels, both of which are available for about $60 (links go to Amazon product pages). Considering that Crossover Mac also costs $60, has a smaller user base, is less polished, and so on– why would you possibly consider it? The chief reason it is that you can run windows programs without installing windows on your computer– that in itself may be reward enough. It also saves you roughly $200 on XP or $300 on Vista, which does give Crossover an economic edge. Beyond that, Crossover weighs in at a mere 40 MB download, and has no particular installation requirements beyond using an intel-based system (the Linux version requires an X86 compatible system; no surprise).

And, while this may not matter to everyone, I personally am very happy to send my money to a small company that is supporting open source development *rather* than to Microsoft. (YMMV.) Codeweavers also maintains a suitably biased comparison chart looking at the different ways to run Windows programs on your non-Windows system; take with a large grain of salt. 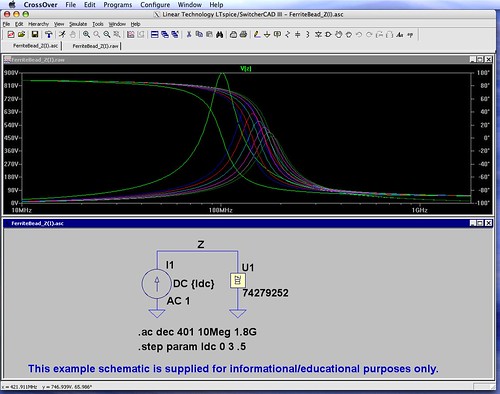 One thing that I can report– and a good enough reason for any electronics-geek Mac user to get a copy of Crossover– is that LTspice runs like a charm.

Right, so what the bleep is LTspice? LTspice, or more formally LTspice/SwitcherCAD III is an electronic circuit simulator available as freeware from Linear Technology, a major manufacturer of integrated circuits. Under the hood, LTspice is of course an implementation of SPICE, the popular analog circuit simulator. Most versions of SPICE– even those that do have a graphical user interface– require that you be something of a programmer in order to enter your circuit diagram as a cryptic netlist. In contrast, LTspice lets you pick components from menus and dialog boxes and hook them up by clicking and dragging your components and wires into place. It’s really a painless way to get started simulating circuits– especially if you never have before. If you need help, there is even a yahoo discussion group about it. It is also worth noting that LTspice is one of very few free SPICE versions with a graphical user interface, good simulation performance, and unlimited schematic size.

Recent versions of LTspice (including 2.21y, the latest) seem to run happily on Crossover under either Mac OS 10.4 or 10.5.

It’s not entirely coincidence that it works under Crossover; it turns out that the developers took pains to ensure that it would run well under Wine, so that Linux users could take advantage of it as well. In any case, it’s a good weapon to add to the arsenal of electronic design tools that are available as freeware.

This entry was posted in EMSL Projects, Software. Bookmark the Permalink.