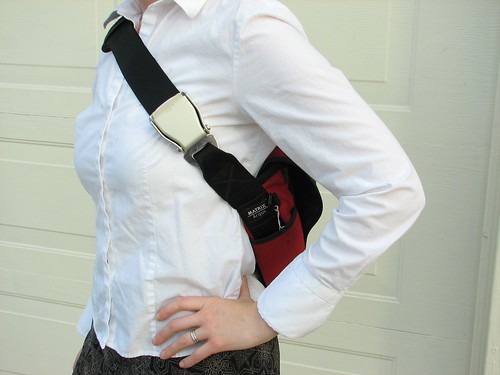 Adding a seat belt buckle to a commuter bag improves its accessibility and usefulness. It’s a pretty easy modification, and super cool if you can find just the right buckle. Airline safety belt buckles (fasten low and tight across your lap…) are becoming more readily available and have a certain industrial charm. 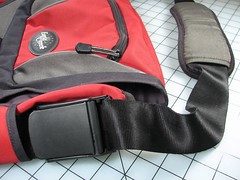 I have loved my nearly indestructible Eagle Creek commuter bag. The only damage it has sustained was at the hands of the EMTs who cut it off of my shoulder, and they were very nice and cut it in an easily repairable spot. It only needed a few more stitches than I did from that crash. (Yes, my laptop was okay.) I have one significant complaint about the bag, though: it is awkward to adjust it to lift over my head and tighten it for riding a bike or for comfortable carrying. I love how the seat belt buckle feature of my Chrome bag solves that problem, so I figured it ought to be an easy upgrade to put a buckle on my Eagle Creek bag. 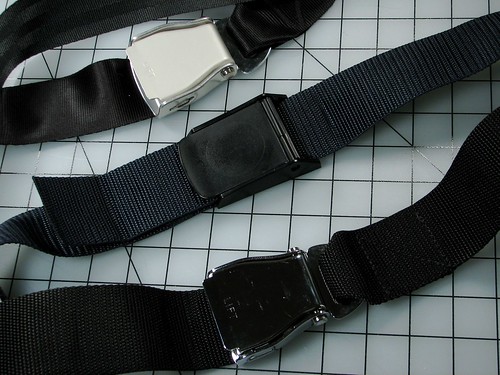 I could have used a plastic buckle from the fabric store, but it didn’t seem sturdy enough (nevermind stylish enough) for the job. I don’t usually have time to check wrecking yards, although that could be a good source. I did poke around on Amazon for a while, and discovered that there are several categories to look into: belts for cars (Automotive), belts for wheel chairs (Health & Personal Care), and belts for people (Apparel). Each of these areas turns up helpful results from subtly different key words. Some key words to play around with are: auto wheel chair safety lap two-point belt strap harness restraint.

I ended up getting three belts (above, top to bottom):

I also considered getting an automotive belt ($24). However, based on the pictures available I thought this would be a similar to the automotive style wheel chair belt. It turns out that in spite of a picture of a buckle with a red button labeled “PRESS” that one is merely a steel version of my “genuine” airline belt. That’s okay by me; one can never have too many airline belt buckles, and that one was significantly cheaper than the one from apparel. The only disappointment in the lot was the “airline style” wheel chair belt, as it was basically the same as the plastic mechanism already on my bag.

The two wheel chair belts used webbing with a coarser weave than the fashion belt, but all of the belts had the same width of webbing,. That just happened to match the width of the strap on my bag. I did have a backup plan in case the webbing was a different width: I would just cut off most of the original strap and sew the new strap to the old one. Luckily, I didn’t have to do that, so the modifications turned out to be very simple. 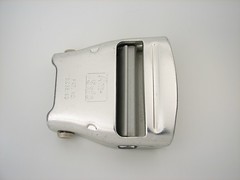 I decided to go with the aluminum airline buckle. The back is stamped with a patent number for the webbing adjuster, which is totally awesome. The steel wheel chair buckle has a knurled roller inside instead of this awesomely shaped bar which pinches the belt when it is pulled in the correct direction. 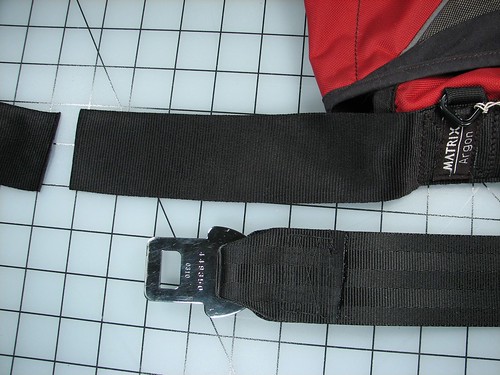 The hard part of this project is deciding where to put the buckle, and which half to put where. I decided to put the fixed (male) half on the side of my bag that goes under my arm. I put the adjustable (female) half on the part that goes over my shoulder. That allowed me to thread the excess strap back through the shoulder pad to keep it out of the way but still adjustable. I noticed afterwards that my Chrome bag does it the other way, and remembered that all that extra strap hanging down under my arm kind of bugs me. Not enough for it to have consciously factored into my decision, but enough that I’m happy with how I did it.

The instructions below should work for any lap style seat belt with a similar adjustment method to that of the airline buckle. If you decide to put an automatically retracting automotive seat belt on your bag, you may have to work out some of the details yourself. 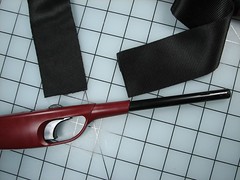 After you’ve figured out where to cut it, you’ll want to fuse the ends so that it doesn’t unravel. You can use an enamel such as nail polish, or simply heat the ends until the fibers melt together. Either way you’re exposed to smelly fumes, so an open window is a good idea. 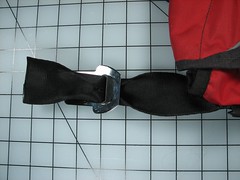 For the fixed end, fold the edges inward to the center and thread through the male end. Then fold over and stitch down. You can copy the original stitch pattern, or just use a big “X” and a couple of horizontal lines. 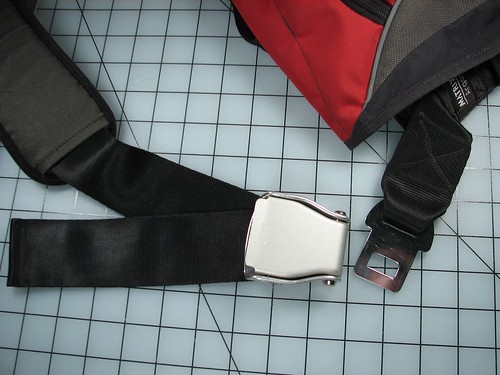 Thread the remaining end through the buckle. Fold the end of the webbing over twice to keep the scratchy fused end rolled up away from everything. Stitch it down with one or two rows of stitches.

This modification has given my bag a new lease on life. And nearly as rewarding, this project gave me the chance to take apart seat belt buckles, which I haven’t done in ages. 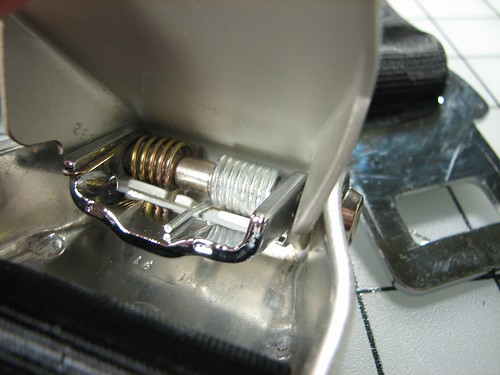 This entry was posted in EMSL Projects and tagged fashion. Bookmark the Permalink.