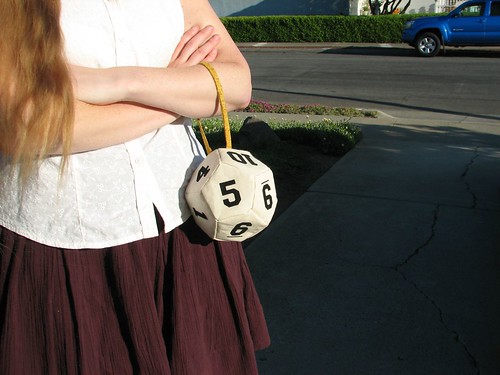 Drawstring dice bags are nearly ubiquitous amongst people who play with non-cubical dice. They can even be used as hand bags. But what about the inverse– a bag that looks like one of the dice? Here’s how to make a dodecahedral handbag using fabric, iron-on numbers, a couple of washers and a magnet. 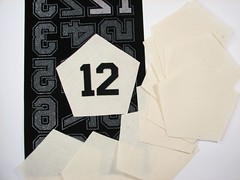 The numbers are iron-on numbers from a craft store. You’ll need one each of 3, 4, 5, 6, 7, 8, 9, and 0, two 2’s, and five 1’s. If you can find individual numbers rather than ones in sets you may be better off. Canvas is a nice match for a bone colored die; I had some scrap around from a previous canvas bag project which was ideal. I used some interfacing for a little extra stiffness, and cotton quilting fabric for the liner and handle. Cut out twelve pentagons (yep, it’s a dodecahedron we’re making) of each type of fabric. You’ll also need to cut out some extra pieces for the lip of the lid. 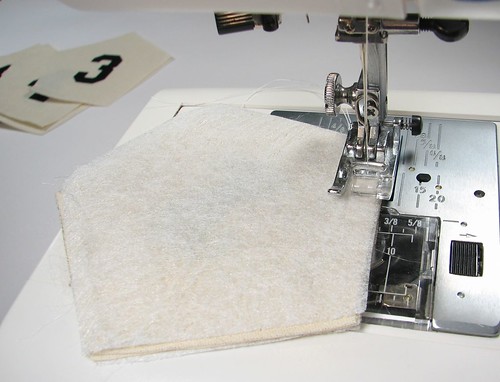 Iron on all of your numbers first. The sewing starts easily enough, stitching two of the pentagons together. Use a 1/4″ seam allowance. I obsessively followed the pattern of a die I had, but you can pretty much grab any two pieces to get started. 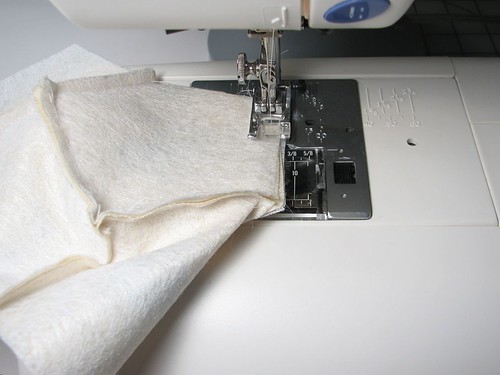 As you move on to connecting more polygons, you’ll need to fold them a bit to align the edges. 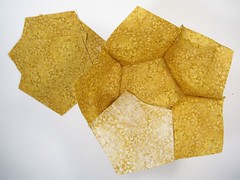 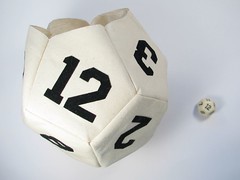 The liner goes together the same way. Continue until eleven sides have been attached. The twelfth is special; it forms the lid. 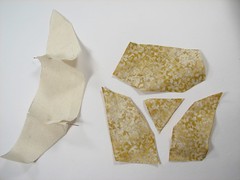 The lip of the lid is formed of two triangles and a trapezoid. You can cut them out of an extra pentagon, leaving an extra little triangle of material in the middle, but we’ve broken them out of the pattern so that they’re easier to cut and sew. 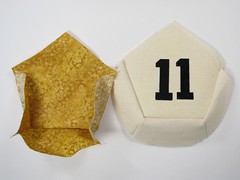 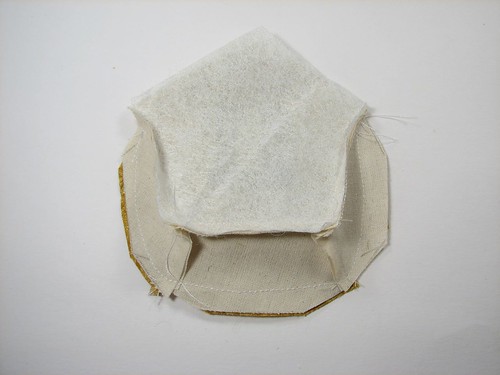 Then sew the lid liner to the outer lid, just around the three outer edges, good sides together. 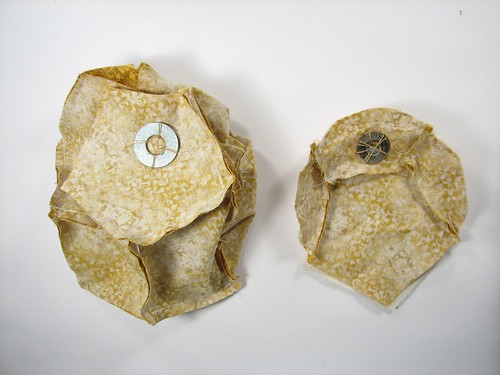 Now for the ghetto magnetic clasp! Most washers are magnetic, and the hole in the middle gives you something to sew to. Sewing the pieces to the lining keeps the stitching invisible. Stitch one washer onto the lining of the body of the bag, on one of the pentagons next to the opening. Sew the other washer, with the magnet attached, to the lip of the lid on the inside of the lining. Or, if you’d rather not magnetize your needle, sew the washer on first, leaving room for the magnet to slip in later. 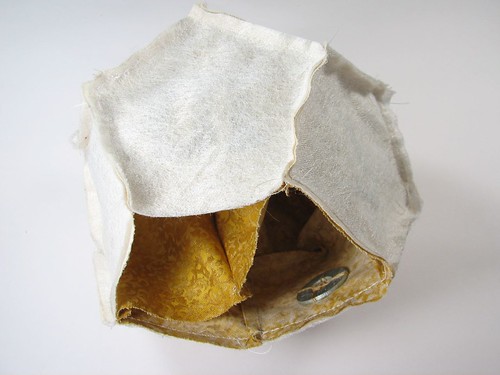 Put the two layers of the bag with their good sides facing each other, and stitch around three segments, leaving two open. Be sure that the washer is in the middle section that was stitched down. 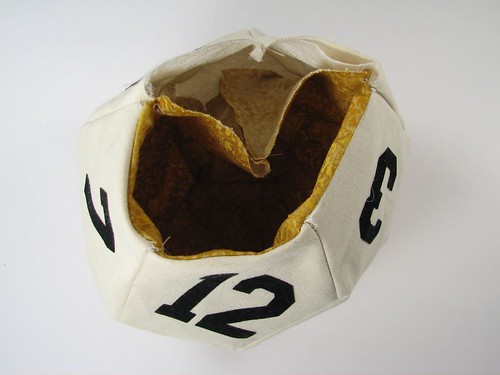 The two open segments should leave enough room to turn it right-side-out. 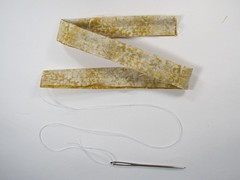 For the next part, you’ll need something to use as a handle. I sewed a 14″ x 2″ strip of fabric with a 1/4″ seam allowance and turned it inside-out to form a cord. The simplest way to turn it inside out is to leave a long thread and tie it onto a yarn needle you can drop and then pull through. Alternately, you could use a ribbon, a string, or even the cord from a worn-out drawstring bag for the handle. 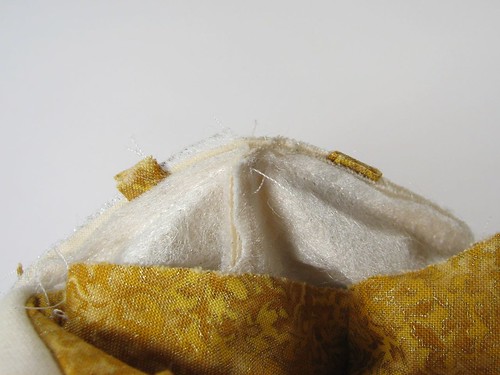 With the two remaining sides, pin the handles in place before sewing the right-sides of the canvas together. Leave the lining open for now. 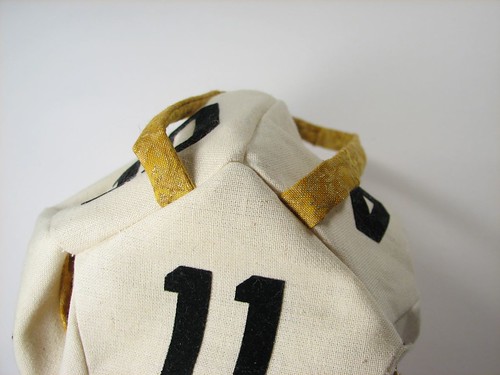 When you flip the lid over and turn it right-side out, the handle should be happily in place. 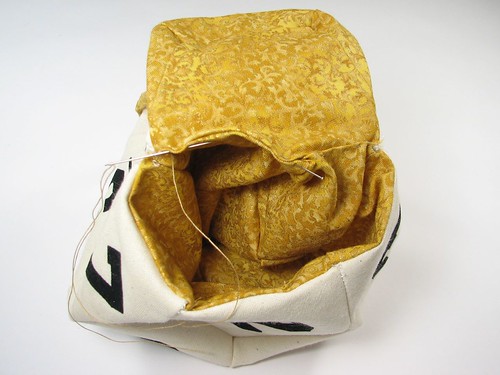 The last step is to hand-sew the lining shut on the inside. 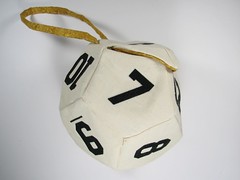 The result is not quite balanced enough for rolling fairly (I’m going to bet that the 12 ends down most often), but it does play its role well. 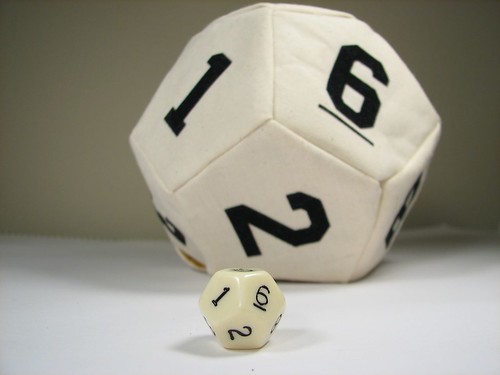 Update: We’ve posted a revised version of the d12 bag project along with a d20 bag project here, and are now making kits available here.

This entry was posted in EMSL Projects and tagged d12 handbag, diy, fashion. Bookmark the Permalink.