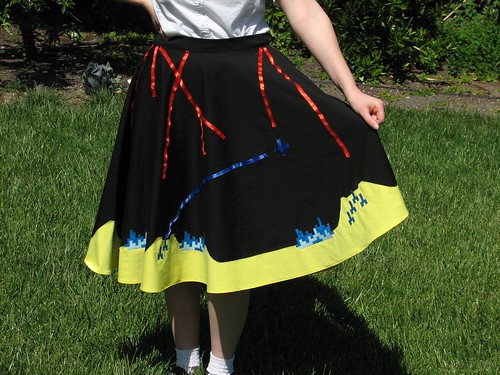 Here’s how to make your own post-modern 8-bit retro poodleless circle skirt. 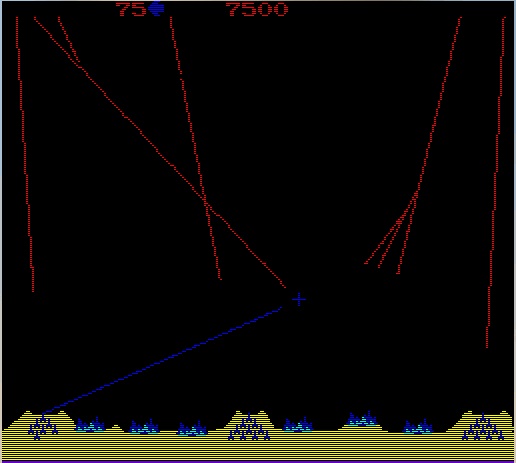 One of the fun things about a video game project is that you have to do research. I relied on Atari‘s online version extensively, as well as my iPhone app. The iPhone app was convenient to have along when shopping for fabric. 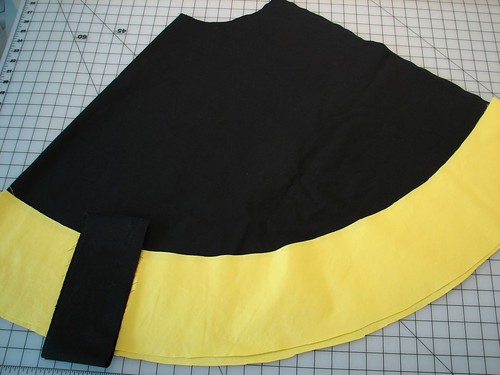 I used a pattern by Cory of Leif Labs to start with. The length of the skirt is about 24″, but you can adjust that based on Cory’s formula. I also added a waistband, but it could be done without one depending on your preference. A medium weight fabric is nice for appliqueing on, especially if you’re too lazy to use stabilizer. Start with two semi-circles of black fabric with a semicircle cut out for the waist. You’ll also need two semicircular strips of yellow fabric, about 6″ wide (smaller if you do a shorter skirt). You can break it into six sections to conserve fabric, or you can cut them out in full semicircles as shown. 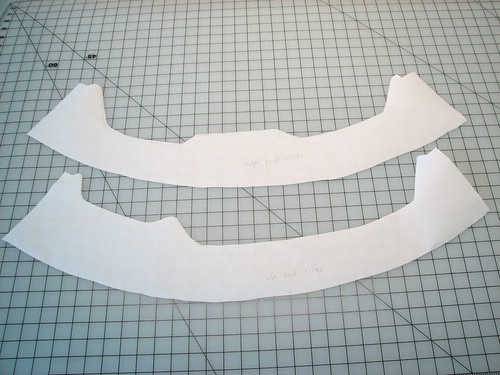 Missile command has three bases with three cities between each of the bases. We’ll put six bases around the skirt and up to eighteen cities. You’ll want to start with patterns from the center of one base to the center of the next base, and you’ll need a total of six of those sections, three of each type. You can either make the pattern to cut out each individual piece (don’t forget seam allowance!), or you can use the pattern to trace the hills and plateaus onto your strip and then cut out the valley sections. Your pattern will vary in size based on the length of skirt you choose. 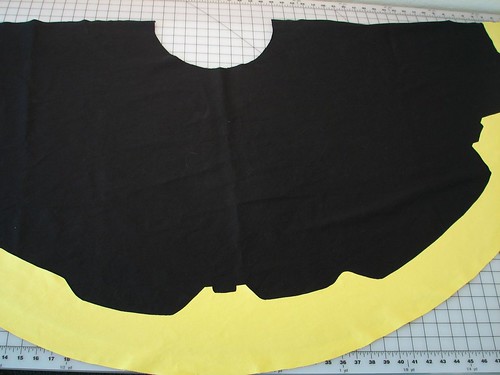 Lay your yellow pieces over the black skirt sections, align them and pin them down. Sew around the outlines of the bases and plateaus to hold the fabric in place. Using a zig-zag stitch would be a good idea to keep the fabric from fraying. 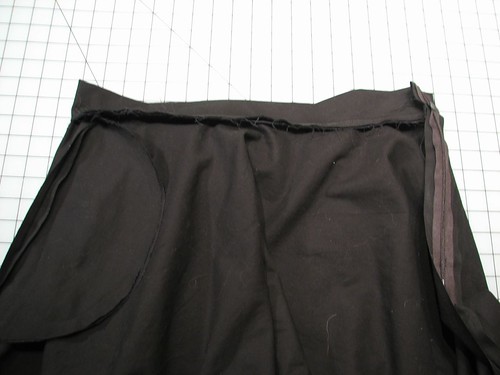 After the bottom yellow stripe is attached, piece your skirt together. I made a waistband made from a strip of 4″ fabric and I added a pocket on one side made from the pieces left from cutting out the waist. (There are probably more correct ways of adding waistbands and pockets than just winging it like I did–check your favorite patterns for tips, or post links to tutorials in the comments.) I put an invisible zipper on the other side with a hook & eye at the top. I love invisible zippers because they always seem to go in so easily, but you can use whatever kind of fastener system you like. You’ll also want to hem the skirt at this point. I used a rolled hem because they’re easy. Once the skirt is together, it’s time to decorate it. 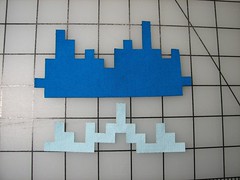 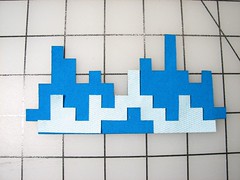 Cutting out the cities is tedious. I like my small thread scissors for precise cuts like this, but you can also use a hobby knife and a straightedge. The cities are each about four and a half inches across, but if your skirt is shorter, the distance between bases will be smaller, so you may want smaller cities. They are simple pixelated shapes with a light blue overlay on a dark blue background. 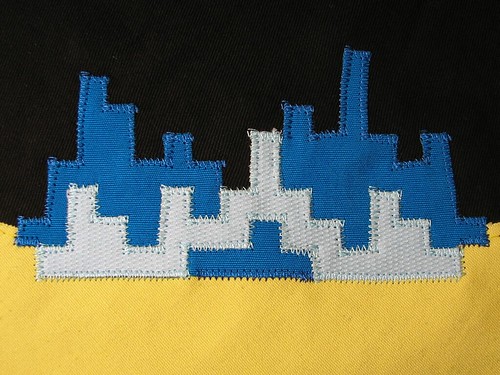 One city is shown here after being appliqued onto the base of the skirt. An easier method of affixing them would be iron-on fusible webbing, but we’re gluttons for punishment, so we zigzagged around all of the edges, switching thread to match the fabrics. 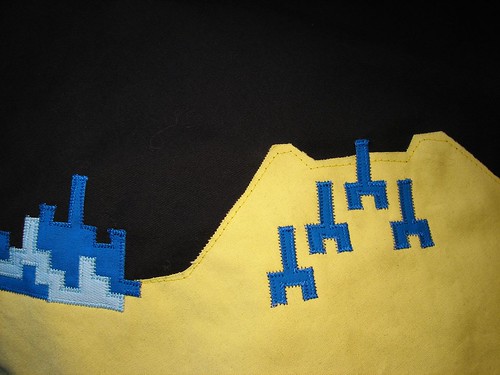 The missiles also need to be added. If you decide that you are not doing so well in the game, you don’t have to add as many cities or missiles! You can also add explosions, killer satellites and bombers. 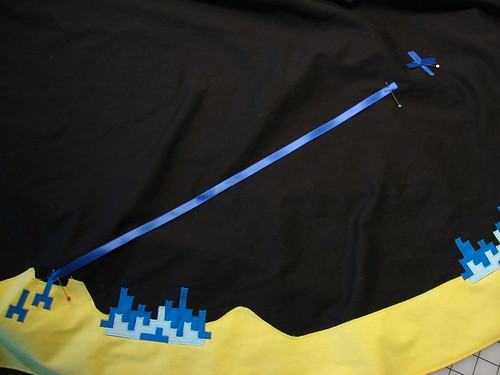 For the missile trails, we use 3/8″ ribbon in red and blue. Pin them down at regular intervals before sewing as they like to slide around a lot. Note that oblique angles like this one will look curved when the skirt is worn. It may be more realistic in terms of ballistics, but not as true to the game, so if you’re worried about that, stick with shots that are closer to vertical. Don’t forget to add branching ribbons for the MIRVs! 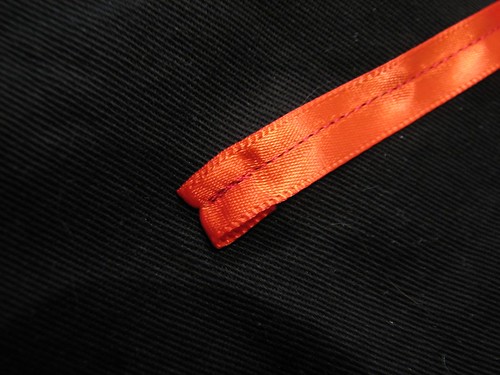 Fold the ends of the ribbons under to prevent fraying. Stitch down the center of the ribbon, tacking back and forth a couple of times at the ends. 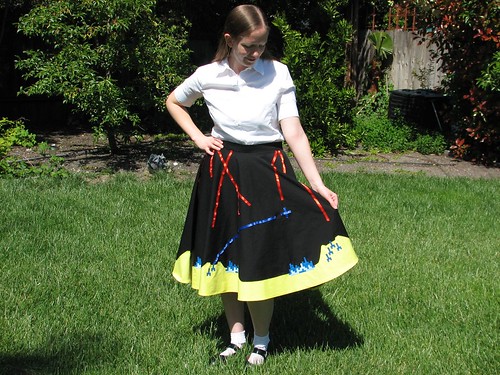 Once your appliques and ribbons are on, you’re done! 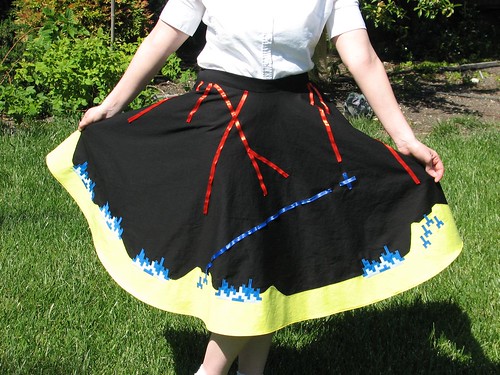 This entry was posted in EMSL Projects and tagged fashion, games. Bookmark the Permalink.