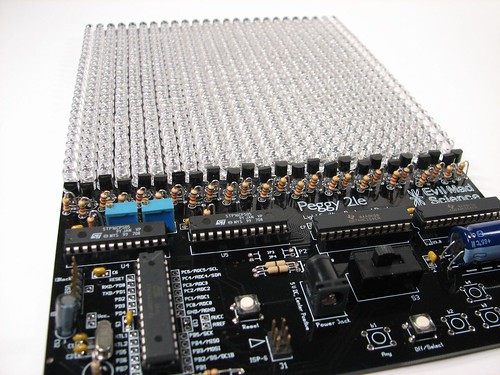 It’s new… and we shall call it Mini Peggy. 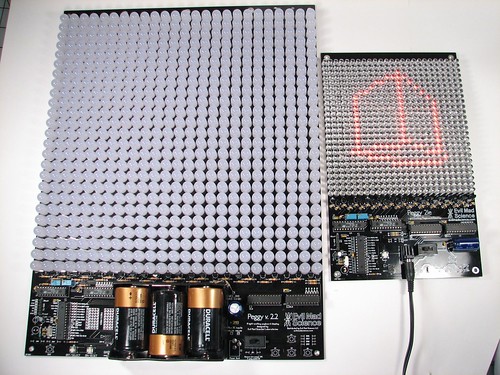 Why make another version? A few reasons. One, some folks needed a higher density of LEDs (resolution) than available on the original Peggy 2 boards. Secondly, a lot of folks have been using Peggy boards to build larger (off-board) LED displays.

Peggy 2LE supports the same basic functionality as the larger Peggy 2: it drives up to 625 LEDs of up to 5 mm size. Still open-source and hackable. Arduino compatible. Code-compatible with Peggy 2– every Peggy 2 program can run on the Peggy 2LE.

The four main differences between the two are:

That last one may actually be the biggest difference: Peggy 2LE can optionally be built with a hardware serial port. What used to be a tricky hack is now supported with a simple wiring change. 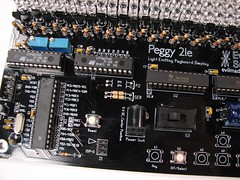 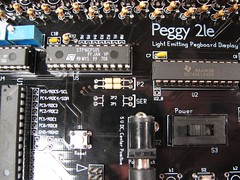 In the center of each of these two photos, there are two jumper wires (one black stripe each) located near the center. But they are located in two different positions. Depending which you choose, it’s wired up for Peggy 2 compatibility, so that all existing Peggy 2 code will work without modification. If you want to go for the “serial hack,” use the other one, and then you can use the serial port while the display is running. You can use it to send or stream data or images to the Peggy. (Note that the pins used to replace the serial port otherwise go to the I2C interface and to button b5 on the PCB. So, you’ll need to choose between I2C and Serial when you build it.) If you go for this option, it will not work with existing Peggy code– so we have whipped up a new version (“Peggy2Serial”) of the Peggy2 Arduino library (which you can download here) that compensates for the change, and will allow most existing Peggy2 software to work with this new configuration– you need only #include <Peggy2Serial.h>. 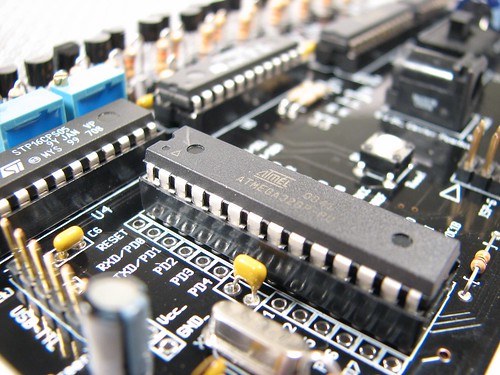 Like the other Peggies, Peggy 2LE is an open-source hardware and software project. We’ll be posting all of the design files (schematics, PCB layout, and build instructions) here in the next couple of weeks, as we finish getting all the materials together.

Peggy software is hosted at Github, and you can find related software there.

And Peggy 2LE is available as a kit at our webstore. :)

Update 12/6/09:
We have posted an updated version of the Peggy2Serial library for Arduino, which includes a large number of bug fixes, several all-new examples, and example code for communicating to the Peggy2 (serial) from Processing.

Nab it here. All users with the previous version are strongly suggested to upgrade!

Update 3/30/10:
The PCB design file for the latest version of the Peggy 2LE circuit board has been posted; you can download it here. (86 kB ZIP archive of gEDA PCB file)

Update 9/6/11:
Extended documentation about the Peggy 2LE kit is hosted at the EMS Wiki.