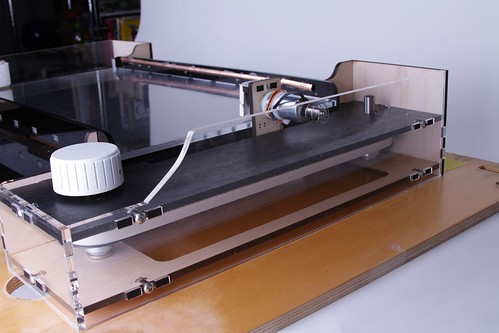 This weekend we brought our updated Tabletop Pong game to Maker Faire, where it survived two hard days of play by hundreds and hundreds of attendees. We were amazed by the reactions to it– particularly that such young and old people alike enjoyed playing it so much.

Of course, our first version back in January was a bit more iffy, and might not have survived a couple of hours at the fair. Here, we discuss the upgrades in some detail, complete with video and– now that it is working well –design files.

After we initially came out with the Tabletop Pong game, there were a few obvious issues with respect to playability. First, the ball tended to get stuck in the middle of the playfield– not something that one expects to happen in the game. Second, the solenoid-driven paddles were a bit touchy: If the ball didn’t hit the paddle with enough force and straight on, it wouldn’t always trip the microswitch to fire the solenoid. There were additional problems with the microswitch model, particularly that the switches were becoming damaged by impact. Worse, after the solenoid pushed out the curved paddle front, it could swing back and trigger the switch again, leading to a useless oscillation. 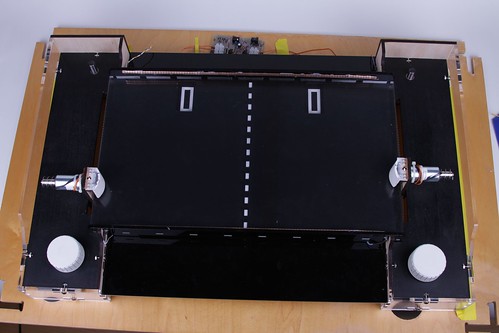 The first change we made– to address the stuck-ball problem –was to bend the playing field. We raised the center up by 1/16 inch. While that means that weakly hit balls will return to your paddle, that’s much better than the alternative, because once they get over the hump, they accelerate towards the other player rather than rolling to a stop in the middle. The playfield itself is a piece of laser-cut 1/4″ (6 mm)
clear acrylic, sitting atop a piece of black 1/16″ acrylic with cutouts for the dotted line in the middle and the score wheels. 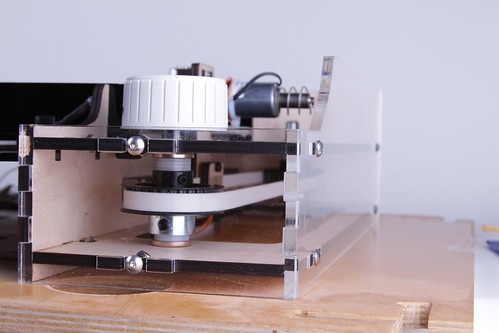 Occasionally with the previous version, the ball would “leap” past the barrier behind the solenoid. For the new version, we made the paddle boxes wider, with tall backstops and a “cutout” for the area where the knob is. We also made the front and side pieces clear, instead out of plywood, so that you can see the mechanism inside. The timing belt and pulleys look fantastic. Another change is that we added these big knobs that we picked up at the electronics flea market. Not sure where you would get these normally, but they fit quite well over the 1/2″ shafts on the pulleys. 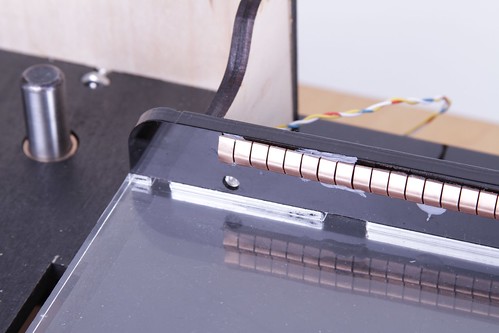 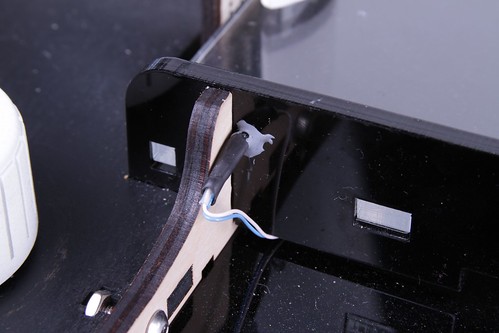 To address the bigger issue — that of the flaky microswitch — we removed the switch altogether. Instead, we added a photogate across the entire playfield at each endzone, right in front of the paddle. The photogate consists of an infrared LED, driven at 120 mA, and an infrared phototransistor, set up to receive the light from that LED. Each is embedded in a hole drilled in the sides of the playfield, just below the bouncy finger strip material.


When the ball rolls past this photogate, it blocks the light between the LED and phototransistor, and we trigger the solenoid on that signal. I had initially imagined that this would be awkward, because it means that the solenoid can trigger even when the ball is not nearby. In practice, it works extremely well, because you’re almost always doing your best to get the paddle close to the ball when it triggers. This mechanism is also extremely robust– without moving parts, and solves essentially every problem that we had associated with the switch. 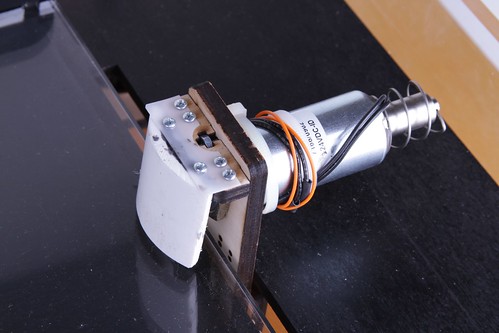 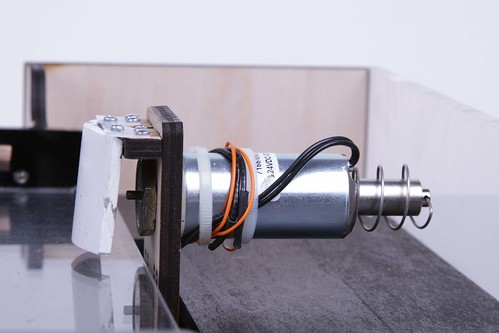 One more change is that we replaced each brass hinge with a little strip of very thin (0.020″) acetal copolymer. This is a springy plastic with good fatigue resistance and the ability to return to its initial position. This is much better than the brass hinge, which doesn’t prefer any particular position. This combined with the photogate setup also leads to a much simpler, more robust paddle– with just the solenoid and its two wires, no sensor on board. 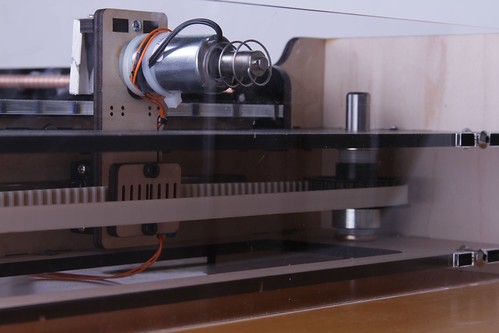 One final thing that we had to figure out were rules for playing the game– notably that to start the game, you should roll the ball to yourself, so that you hit it with your paddle to the other player– much like in ping pong or tennis. It’s counterintuitive, but it makes sense if you think about it, because you don’t just *throw* the ball to the other player in games like those.

And it turns out to be playable indeed. Following is a quick snippet of video we took of one of these hundreds of games. You can see a few poor hits– where the ball takes a while to wander to the right place, but it ultimately does so, and the game doesn’t stall. (If you can’t see the video here, click on over to YouTube.)

And we even got an Editor’s Choice ribbon! 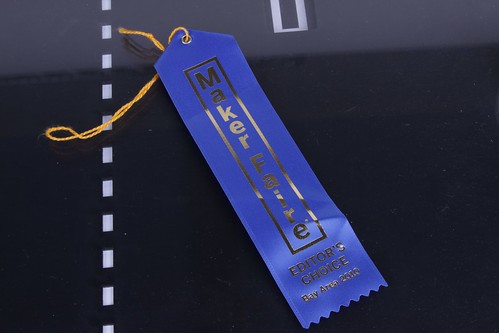 You can download the design for all the parts here (66 kB Inkscape SVG).

Please note that some of the parts are surplus in nature– the linear slides, the beryllium-copper finger strips, and the big knobs, so you may need to improvise a bit on those portions. 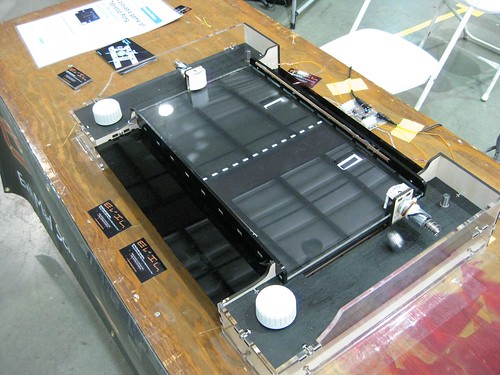 This entry was posted in EMSL Projects and tagged games, makerfaire, tabletop pong. Bookmark the Permalink.