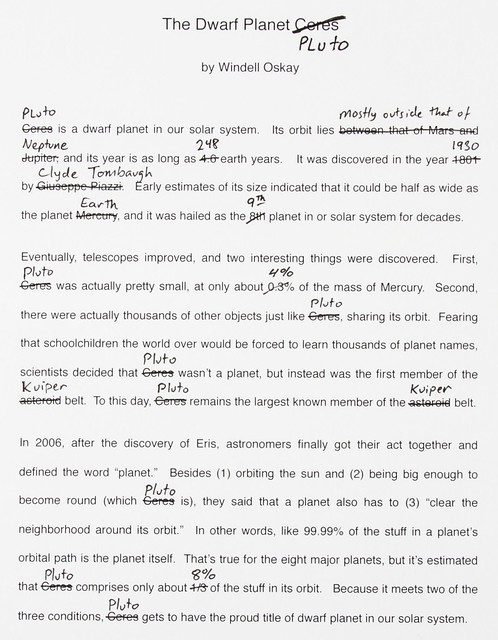 When Pluto was “demoted” from being a planet some years ago, I thought that it was pretty stupid. After all, I had learned about our set of nine planets as a simple fact in grade school. If anything, I had expected the number of planets to grow as they were discovered, not shrink.

What’s the big deal? Why not just grandfather Pluto into the club? The principal consequence of which objects are called “planets” is how many little plastic balls go into a solar-system model kits, right?

Well, yes and no. It turns out that our solar system has a huge number of objects. Not just the sun and a handful planets, but also hundreds of thousands of other cataloged objects (“minor planets”), the vast majority of which are now classified as small solar system bodies. These include most of the main-belt asteroids, comets, centaurs, trojans, kuiper-belt objects, scattered-disc objects, and other trans-neptunian objects. And, we will discover more.

Today Pluto, like Ceres, is proudly known as one of our five wonderful dwarf planets.

What distinguishes these dwarf planets from their larger and more familiar cousins? An intuitive and powerful discriminator: Simply put, planets are out there orbiting on their own, while dwarf planets are found in belts of objects that share the same orbit. Putting this in mathematical terms, there’s a stark difference between our eight planets– which dominate their orbital neighborhoods –and our five known dwarf planets, which at best make up mere fractions of their respective belts. Now that we’ve recognized the difference between major planets and dwarf planets, it’s clear as day which group Pluto belongs to.

And, despite poor Pluto, the minor shame of having “lost” one of our planets seems more than made up by the discovery in 2003 of Eris— a dwarf planet both larger and (usually) more distant than Pluto. Already, some dozens of other dwarf planet candidates have been identified, and there are countless others yet undiscovered.

The simple fact is that we live in an exciting time of discovery. While it may feel natural in a sense to enshrine an immutable list of “the planets,” it is instead our humble duty as scientists to accept that we don’t — and almost certainly never will –know everything.

This entry was posted in EMSL Projects, Science and tagged science, space. Bookmark the Permalink.

5 thoughts on “On the dwarf planets”