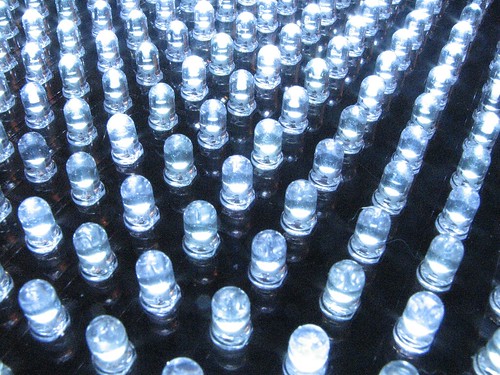 There are probably thousands of cool ways to build clocks based around an LED matrix, and we’ve seen some neat analog and digital clocks based on our Peggy 2 kit. But we’ve also come up with a few dozen other cool ways to show the time, and realized that we’ve only scratched the surface.

So today, we’re announcing a Clock Concept Contest: Show us your coolest idea about how to build a Peggy clock, and you could win one!

First, come up with a cool idea.

Is it analog? Is it digital? Just abstract blinkenlights? Is is receiving a live video feed from the internet? Is it a word clock? A game clock? A binary clock? Or hexidecimal? Is it a world map with LEDs wired up from a Peggy board that tells the time by latitude and longitude illuminated? Or something far more outlandish and never heard of?

Then, figure out how to communicate your idea. There are lots of ways to do this. You might want to use screen shots from the Peggy planner or Peggydraw. Or maybe graph paper, freehand sketching, pastels, or oil paint. Or origami, if that helps. You can show off your mad animated-gif skillz, put up a youtube video where you describe it deadpan or through interpretive dance, post actual working peggy code, build a lego model, render a 3D movie, or otherwise take advantage of whatever your favorite medium is. If it’s not self-explanatory, make sure to explain how you tell the time!

To enter the contest, add your entry (or entries) to the Evil Mad Science Auxiliary pool on flickr. Or, if your idea isn’t visual or won’t fit in that space, sign in and post a comment here on this article linking to where you’ve published it. (Yes, sign in. Please don’t enter anonymously.) Contest tags are: peggyclock or #peggyclock as appropriate.

Clarification added 1: Your entry should show us otherwise convey how the time is displayed, ideally down to the pixels. If it’s not digital, you may need to show more than one picture to convey your idea.
Clarification added 2: Note that we didn’t say “enter by leaving your idea in a comment here.” Hint hint.

This is a fast contest: Entries will be accepted through Tuesday, June 29. So get cracking!

One First Prize: A fully loaded Peggy Awesomeness Bundle, with your choice of LED configuration.

Three Second Prizes: Your choice of a Larson Scanner, a Deluxe LED Menorah Kit, or a Diavolino kit

Just as a reminder, the Peggy 2 is an intelligent, Arduino-compatible (“freeduino” based), multiplexed 25 x 25 LED matrix, supporting up to 10 mm LEDs (or up to 5 mm LEDs in the Peggy 2LE version). It supports single-color LEDs at each point in the matrix, but you can mix and match different color LEDs throughout the matrix, and you don’t have to populate every LED location. Your entry should involve some way to create a nifty timekeeping device with the Peggy.

This entry was posted in EMSL Projects and tagged peggy 2. Bookmark the Permalink.