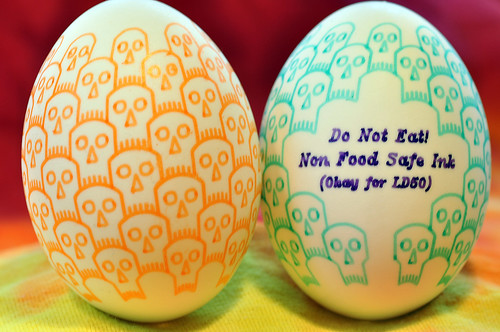 For my Eggbot plotting, I’ve had two seemingly exclusive goals: to execute
designs with food safe inks, and to use pens capable of producing fine, crisp
lines. Now, thanks to Lenore’s recent investigation of food safe markers combined with a simple five minute pen modification, it’s possible to achieve both goals with the same pen. Yes, I can have my eggs and eat them too!

As Lenore demonstrated in her investigation, unmodified KopyKake Edible Ink Coloring
Pens do a fair job of drawing on eggs, producing legible printing. However, they produce relatively thick lines of about 0.8 mm which lack the crispness typical of quality fiber tip technical pens. This would seem to make them unsuited for detailed designs or designs with small print [1]. However, it’s possible to replace a KopyKake’s original nib with that of a fiber tip technical pen. Specifically, a replacement nib for a Copic Multiliner SP. The result is a food safe pen which rivals any of the fiber tipped technical pens.

To execute this mod, you will need:

Replacement nibs for Copic Multiliner SP pens come in a range of sizes from 0.03 to 0.70 mm. Avoid the 0.03, 0.05, and 0.01 mm size nibs as they have a feeder filament which is too fine and too short for use with a KopyKake marker without extra care and modifications [2]. Within the United States, these nibs may be purchased online from Dick Blick Art Materials. The 0.20 and 0.25 mm nibs are slightly cheaper than the other sizes as they come two to a package instead of just one. 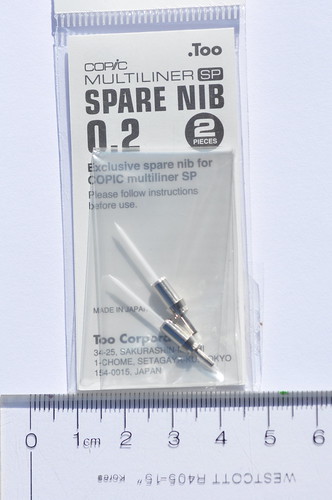 For this modification, we will use a 0.20 mm replacement nib. 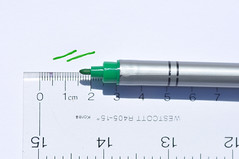 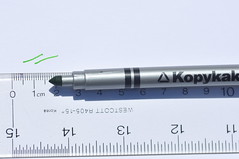 Before proceeding with the modification, let’s look closely at a KopyKake pen. The pen actually has drawing nibs at each end of its barrel. At one end, there is a narrow nib, while at the other end, there is a wider, conical nib. 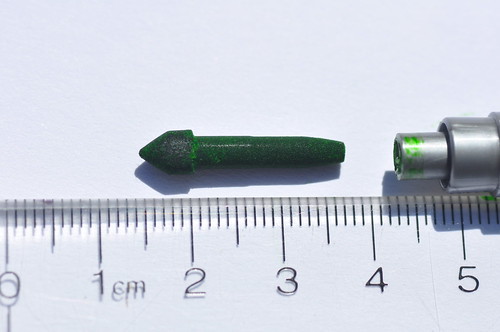 With a pair of pliers, grip the wider nib and pull it straight out. It should remove quite easily. You may even be able to remove the nib with your scissors just slightly biting into the nib. If you wish, you can save this nib for later re-use: just put it into a plastic bag to keep it clean. (It’s okay for it to dry out.) 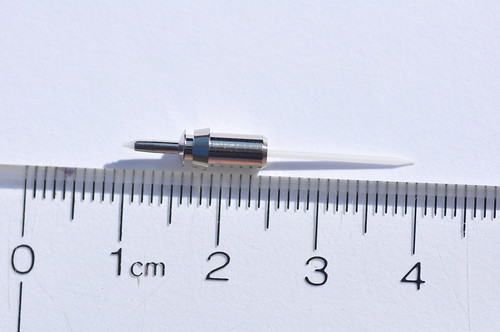 Now, remove the replacement Copic nib from its packaging. If you try to insert the replacement nib into the KopyKake pen, you should see that the fit is a little too loose. 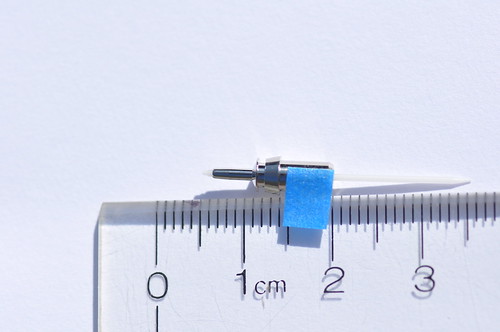 To make it a little more tight, cut a very small piece of masking tape. The tape should be no wider than the the section of the nib’s collar which will be inserted into the pen’s barrel. Moveover, the tape does not need to completely wrap around the collar. Only going about half to two-thirds around is sufficient to make the nib fit well yet still be removable. 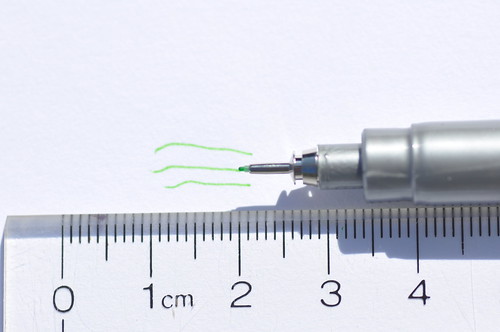 Once you have secured the tape to the nib, go ahead and insert the nib into the pen. Push it down until the nib’s collar seats itself against the end of the pen’s barrel. After a minute or two, you should see the new nib’s color change from milky-white to that of the pen’s ink color [4]. Make sure that the pen’s cap fits on well: if it wants to fall right off, you may not have the new nib inserted all the way. You’re now ready to draw with your modified pen! 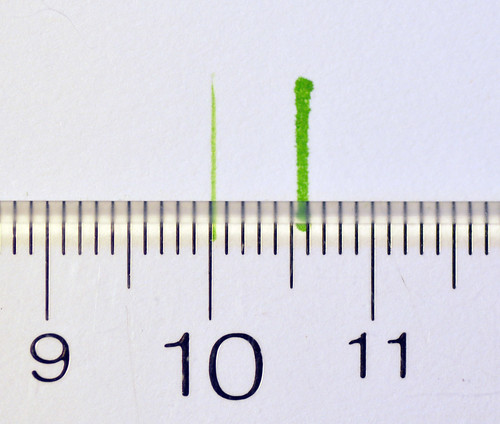 Some quick comparisons show that the original pen tip draws a 0.75 or 0.80 mm line; whereas, the replacement tip draws a line of one-third that width (0.25 mm). 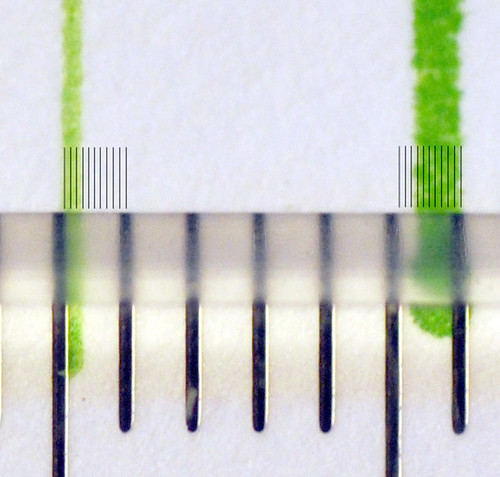 An even closer shot of the line widths. 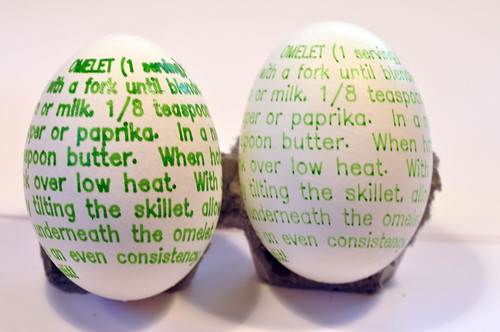 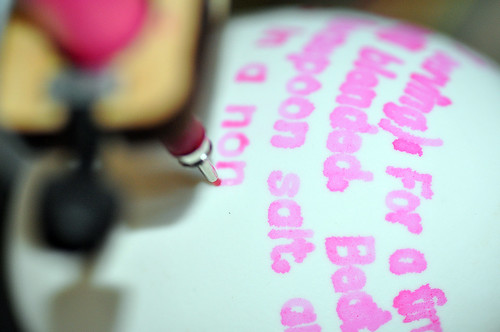 Can AmeriColor Gourmet Writer Food Color Markers be modified as well? Yes, but the results are not very encouraging. The modification can be done with the assistance of a small twist drill bit,

However, the Eggbot plotting results are no better than those with the unmodified pen: the inks in the AmeriColor pens demonstrate a considerable amount of bleeding. While my modified AmeriColor pen drew very nice, tight lines on paper, I saw terrible bleeding on duck eggs. Initially the lines would look reasonable, but a minute
later the inks had bleed. And note that the egg shell was quite dry: this bleeding was not the result of moisture on or in the shell. It was repeatable with a chicken egg as well.

I have not tried modifying Wilton FoodWriter pens: the ends of their barrels look too big to accomodate a replacement nib without the use of an adapter bushing. Should you try modifying one of these pens, please do leave a comment describing your experience.

This entry was posted in Eggbot, EMSL Projects, Play with your food and tagged eggbot, eggs. Bookmark the Permalink.