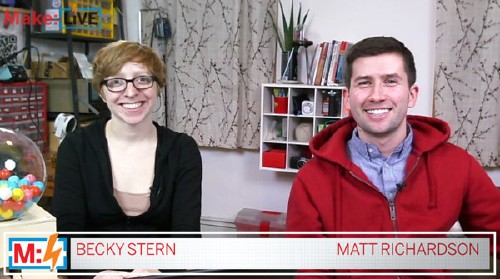 We’re looking forward to today’s premier of Make: Live, a new live web show hosted by Becky Stern and Matt Richardson. The show will feature show and tell DIY projects from guest makers and hackers– and we’ll hope to be amongst those guests in an episode later this year.

The first episode is Arduino focused, and features two (more) remarkable friends of ours: Steve Hoefer (of rock-paper-scissor-golve fame) and Collin Cunningham (of Make Video fame). Steve is bringing his Secret Knock Gumball Machine, and Collin will be discussing his MidiVox shield for Arduino.


The show runs live Wednesday January 26th, 9 PM Eastern / 6 PM Pacific, and you can see it at makezine.com/live or on UStream.

(And, if you can’t catch it live, they’ll be archiving it on their YouTube channel and iTunes podcast. We’ll post direct links to those when they’re available.)

This entry was posted in Education, EMSL Projects, Engineering and tagged make. Bookmark the Permalink.