We recently got a question about our flickering LEDs:

I’m wondering if it’s possible to wire these in series?

It’s a good (and not entirely uncommon) question, and the short answer is: “Yes, but not with each other.”

If you put two of these in series, the first one turns the next one on and off repeatedly, interrupting the second chip and preventing it from executing its flickering pattern. The result is that you get momentary blinking, but not the nice flickering pattern.  (So yes, both would in fact light up; they just don’t behave how you might hope that they would.)

So how can you hook up a bunch of flickering LEDs together? If you want each LED to flicker separately, you can hook them up in parallel. But there is a way to use these in series with other LEDs. We can even use this to combine multiple LED colors to create some fantastic LED “flames” that would be great for stage props or putting inside pumpkins.

You can use one flickering LED in series with an appropriate resistor and one or more non-flickering LEDs, and they will all flicker together in the same pattern. To use this to create a flame effect, you can add several groups of LEDs of different colors together. 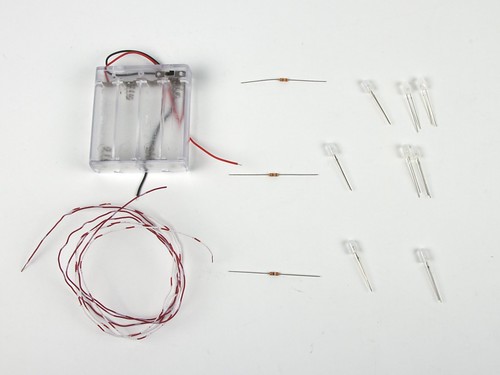 The first string will consist of a 24 ? resistor, a yellow flickering LED and two regular yellow LEDs. We wire these three elements up in series across the power supply, which is a 4×AA battery holder that supplies 6 V. All three yellow LEDs will light up brightly and flicker with the exact same pattern.

The second string will also have a 24 ? resistor with a yellow flickering LED, but will have two regular red LEDs. We wire this in parallel with the first string; that is, across the full 6 V from the battery holder.

The third string will have a 39 ? resistor with the yellow flickering LED and one blue LED. We’re using one blue LED in addition to all of the red and yellow here to simulate that lower blue flickery part of a fire. To prevent the blue LED from adding too much blue into the mix, you could increase the resistor value  to decrease the brightness. 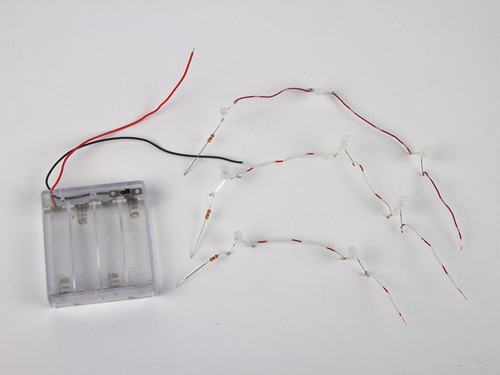 You could put this together on a breadboard, a perfboard, or even solder the LEDs directly together. We’re opting to add some wire between the LEDs to allow them to be arranged in a variety of positions later. 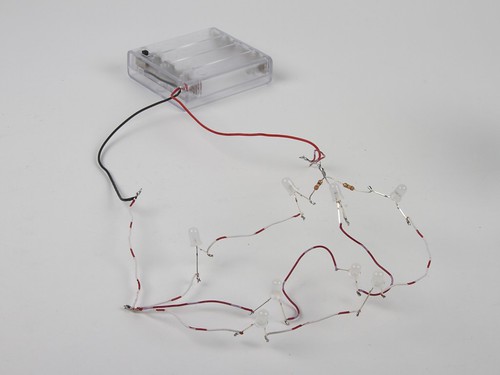 All three strings are hooked together and ready to test out. 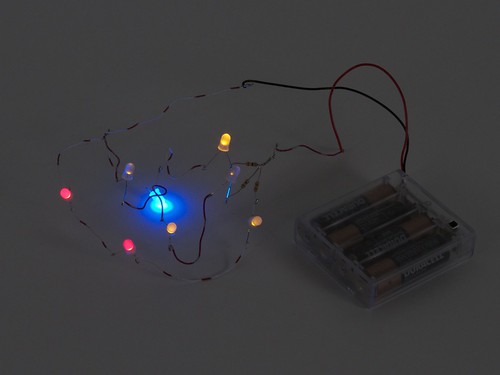 Once the batteries are put in and it is turned on, it turns out that the blue is incredibly bright. We wanted just a hint of blue to represent the blue at the base of a flame. 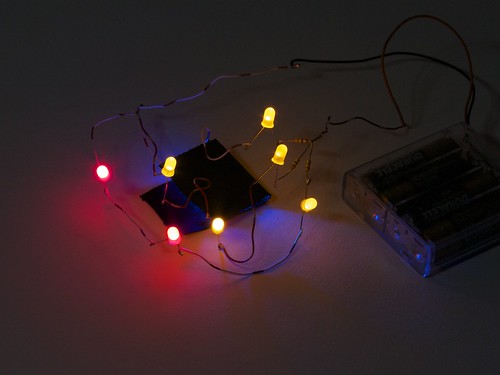 By mostly covering the blue with a scrap of black fabric, we get a good balance of colors. The flickering seemed extremely effective with the three strands flickering separately. We covered it with a diffuser (some embroidery interfacing) and put together a little video which is embedded below:

Tools & materials used in this project:

This entry was posted in Electronics, EMSL Projects and tagged Halloween, LEDs. Bookmark the Permalink.

3 thoughts on “From the mailbag: flickering LEDs in series”