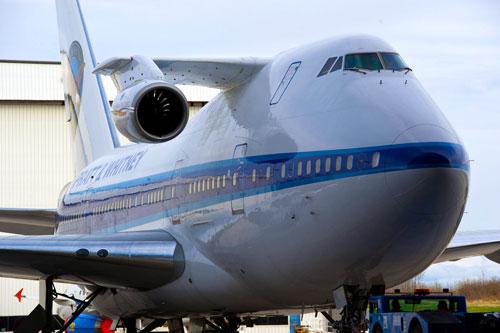 Whoa! What the heck is that?

It turns out that it’s a flying testbed for new gear-driven turbofan jet engines being developed by Pratt & Whitney. While much can be done on fixed test stands, this lets them test the engines on a real aircraft at high altitude and under a wide variety of environmental conditions.

The little engine under test above— destined for smaller regional jets —is mounted to a “stub wing” on a specially-modified Boeing 747SP.  That’s the same short-body model of 747 that NASA adapted for the SOFIA aircraft-based telescope.  This particular aircraft is a full-time testbed at Pratt & Whitney; its main engines are larger versions of the little one under test.

These new gear-driven engines are interesting on their own; a gearbox between the main fan and the turbine allows each side to run at a more optimal speed, and promises a significant increase in overall efficiency.

This entry was posted in Everything Else. Bookmark the Permalink.