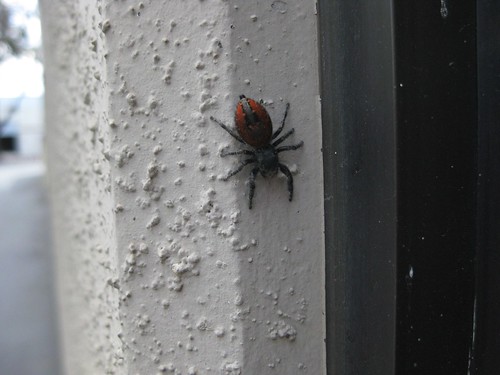 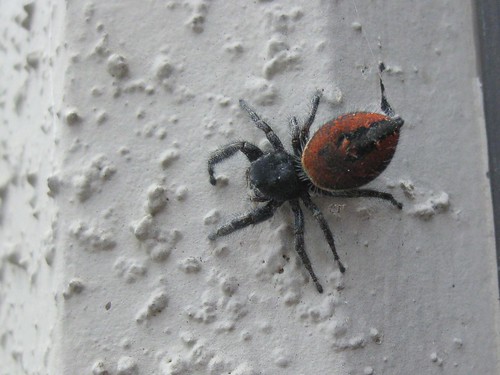 It’s always good to keep your eyes open, ready to see new things. I came across this striking not-particularly-small spider with a bright red velvety abdomen, just hanging out on the concrete side of a building here in Sunnyvale, California. I’ve never seen one of these before! How might you go about identifying it? 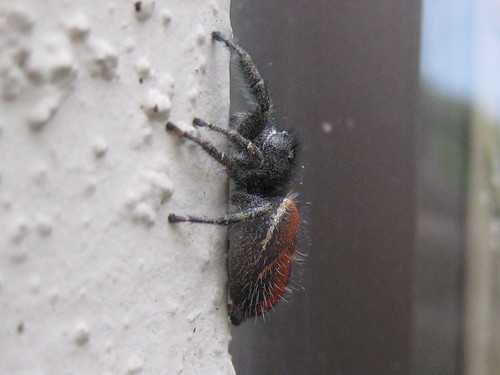 If you start with any halfway decent identification guide, the first thing that they’ll suggest is to make sure that it’s really a spider, by looking for a few key markers: exactly two body sections, eight legs plus short pedipalps near the mouth, spinnerets, no wings, and no antennae. And this fine creature passes all the tests with flying colors. Even the spinnerets are clearly visible. Depending on the size (and speed) of your spider, going through that checklist can be quite a challenge, and may even involve a microscope. Fortunately, our fellow was only walking around slowly and not particularly tiny: 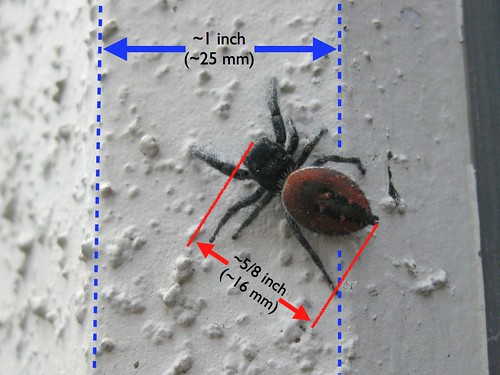 By comparing it to the angled features on the wall, we can see that the spider’s body (not counting the legs) is about 5/8″ (16 mm) long.

(The photo is also available without annotations, here.)
And that’s about as far as the casual urban arachnologist can often get: We know that it’s a spider, that it’s relatively big, and that it has a red-velvet abdomen, vaguely resembling that of a velvet ant.

To go a little further, we’ll need some reference materials. The first step in identifying a spider’s species is to gaze deeply into its (plentiful, highly-acute) eyes. The arrangement of the eyes is one of the key factors that allows you to identify what family (and sometimes genus) a given spider belongs to.

So what have we got? 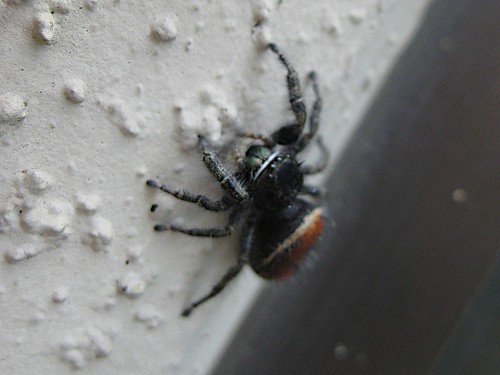 From the front (and please forgive the poor macro focus from the pocket camera), there are two large center eyes, and two slightly smaller eyes positioned outside and above those two. All of these are on the very front facet of the cephalothorax (the frontmost body segment). 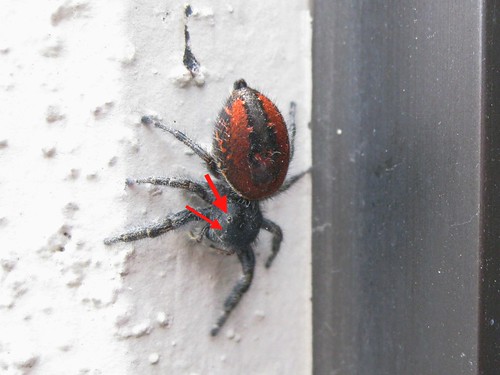 There are also two additional “upper” eyes, spaced further apart, and located way over at the top center of the spider’s cephalothorax. One of them is labeled by the upper arrow. And it’s not as clear, but perhaps we can also see two much smaller eyes there as well, halfway between the upper eyes and the eyes at front of the cephalothorax. One of these is at the location marked by the smaller arrow.
Now, the reference materials. There is a basic (but clear) illustrated chart of spider eye arrangments
available here and there is a more comprehensive guide (with a lot of pictures) available here. From these and other sources, we can recognize our spider’s eye arrangement as that of the family Salticidae, the jumping spiders. 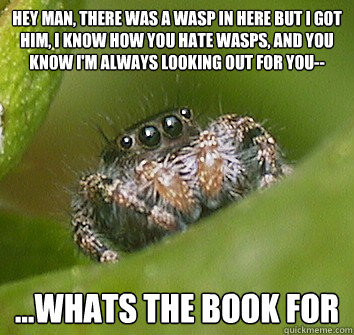 Aside: Those of you who spend too much time on the internet may also recognize this as the eye arrangement on many “cute” spiders to be found here and there, including the famous misunderstood house spider. 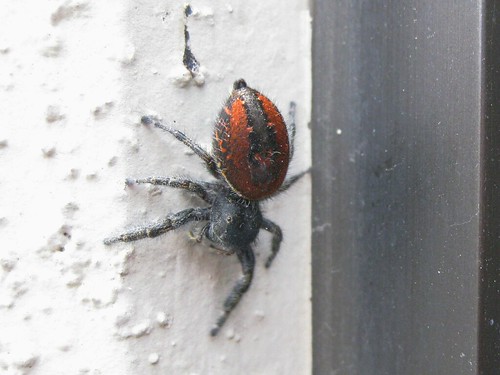 Salticidae is actually the largest family of spiders, so we’re not done yet. With patience, we were able to use the Bug Guide to narrow our species down to one in the subfamily Dendryphantinae and specifically genus Phidippus.

And that is about as far as we– as amateurs –can be certain, with the added note that this spider is female, since it has the black feature in the middle of its abdomen which males lack. Precisely identifying a spider by species often involves microscopes and (sadly) better references than we have readily available. It often involves looking for specific morphology, rather than patterns or coloration (which tend to vary tremendously).
We had initially been confident to identify this spider as Phidippus Johnsoni, commonly known as “Red-backed Jumping Spider” or as the “Johnson Jumper.” However, additional searching has shown us that these spiders vary tremendously beyond just the “cover shot.” Browsing through pages of images of these and similar species (Phidippus Carneus images here and Phidippus Johnsoni images here), it’s clear that there are significant normal variations between individuals of these species (and sub-morphs of these species), which leads to uncertainty compounded by the likelihood that some (or many) of those photos are misidentified in the first place. Judged from the body of available pictures (this one included), Phidippus Carneus seems like best match. Further, the sizes reported for Johnsoni seem to run a bit smaller than our example, at 9-14 mm, typically, while Carneus runs a bit larger at 15-17 mm.
And so here is our (hopefully) final word on the subject: Adult female spider of genus Phidippus, likely Phidippus Carneus. Have you ever come across one of these, or do you know how to identify these more precisely? We’d love to hear from you in the comments!
This entry was posted in EMSL Projects, Nature and tagged spiders. Bookmark the Permalink.