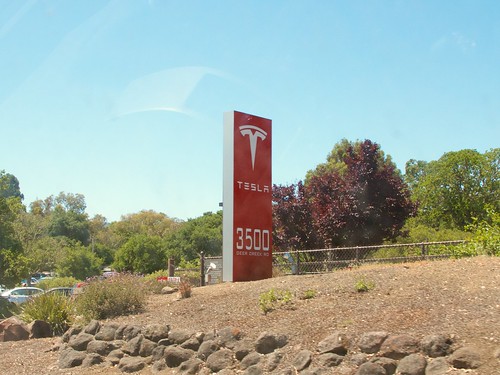 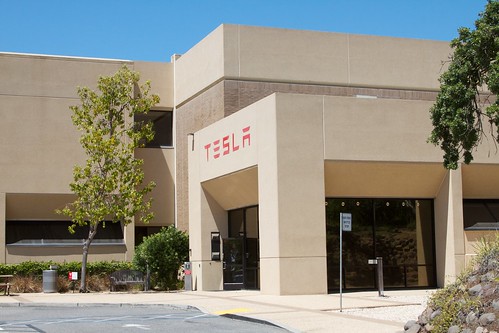 Recently, we were invited along for a short tour at the corporate headquarters of Tesla Motors in Palo Alto.  And, we brought our camera.

The Palo Alto facility is a former HP/Agilent building, located in the Stanford Research Park, just a mile from Xerox’s famous PARC (Palo Alto Research Center).  While Tesla now has a factory across the bay in Fremont, CA— the former NUMMI plant —their Palo Alto headquarters is where much of their engineering and small-scale manufacturing takes place. 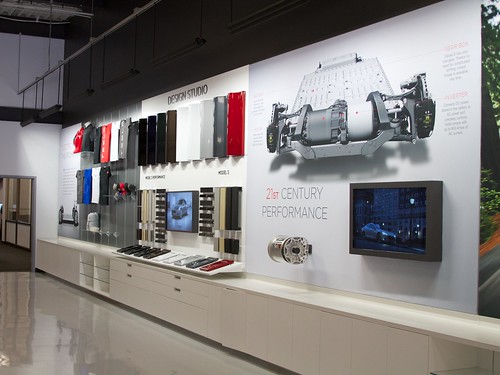 The first thing that we got to see was a large hall, where one wall was arranged as a mockup showroom.  This hall serves both as a prototype for their retail spaces and as a venue for local events. 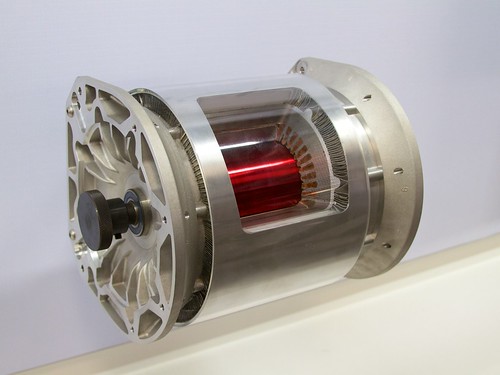 The showroom section has the usual paint chips and upholstery samples out on display. However, and even though I’ve already seen one at Tesla’s showroom in San Jose, I can’t help but squeal with delight at the cutaway motor display. It’s the same type found in the Tesla Model S, a liquid-cooled three-phase induction motor capable of up to 420 hp, and it is remarkably compact. 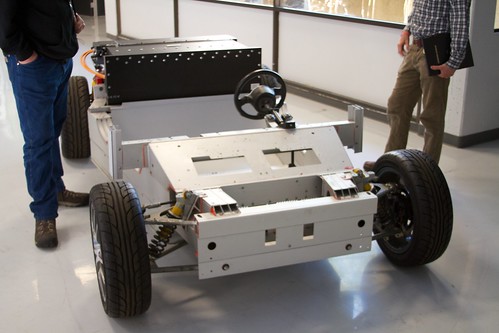 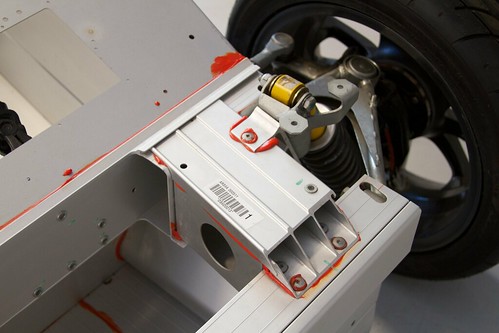 They also had the rolling chassis from a Tesla Roadster out on display.

The chassis is made by Lotus and is identical (or nearly identical) to that of the Lotus Elise, which the Roadster is based upon. It’s made of “bonded aluminum,” which is to say that it is made of aluminum extrusions that are glued together with high strength (and bright orange) epoxy.  Apparently this process produces bonds with a higher strength-to-weight ratio than welded aluminum; you can read more about the process here. 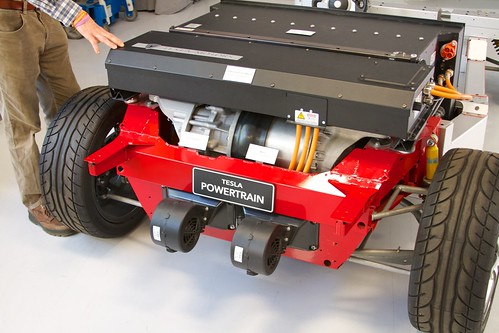 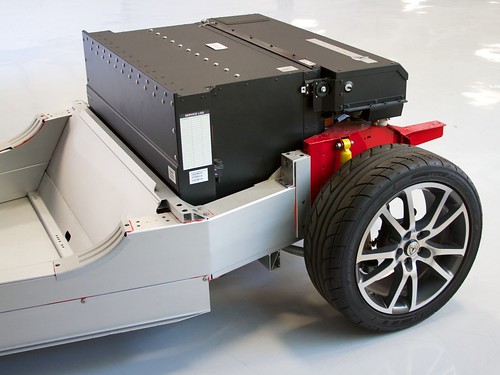 The back of the Roadster is a little more “Tesla”, with the motor and gearbox just above the red rear frame, and the big black battery box forward of the wheels. 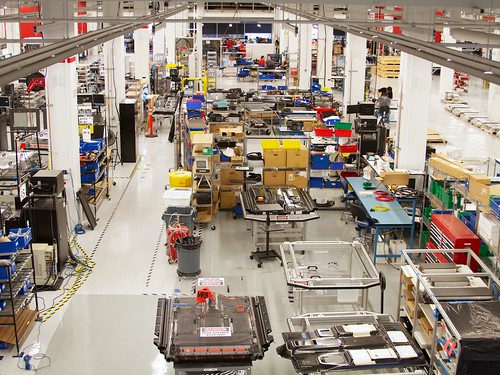 It’s certainly not all show. Aside from huge rooms full of engineering workstations (that we can’t show you), there’s also a manufacturing floor. 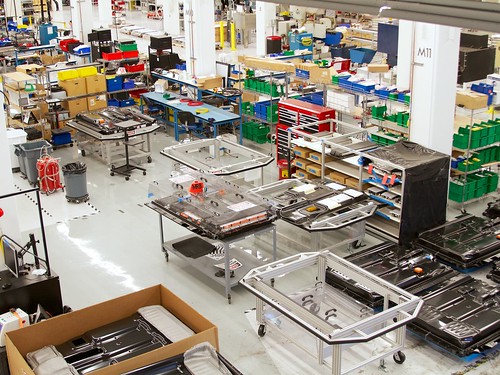 The large black slabs visible in these shots are battery packs for the Toyota Rav 4 EV, which are made here by Tesla.   You can see some packed up for shipping in the crates at lower left, and on specialized carts for assembly, charging, and transport. 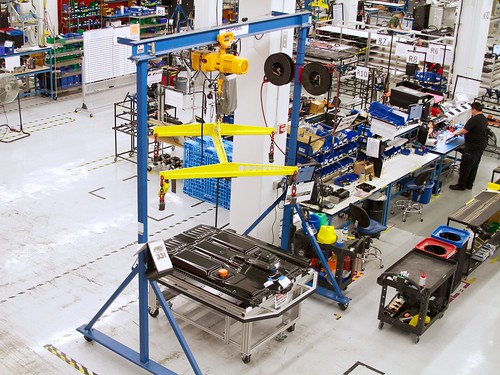 This little crane and gantry is obviously set up to move the battery packs on and off of the carts; it might also be used to lower them into their crates. 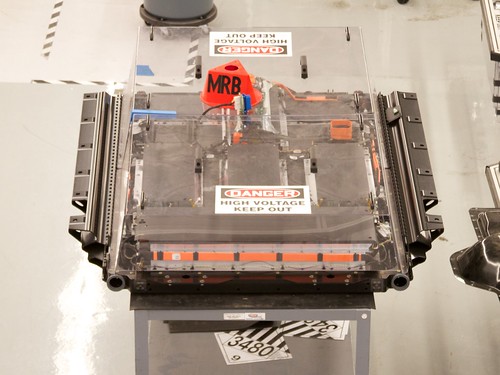 This battery pack has a protective plastic cover over it, because its (shiny black) hard cover has either been removed or not yet installed.  You can see some of the internal structure, with large blocks of lithium cells. 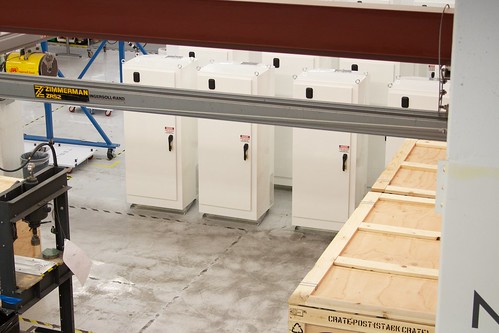 There are other things being made here in small quantity as well: battery packs for other small-production electric vehicles, and some kind of charging stations, as seen above. 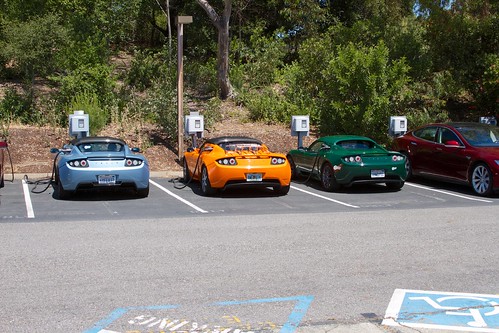 Perhaps the tastiest part of the tour was on our way out: Three Tesla Roadsters between two Tesla Model S cars, charging at the stations in the parking lot.

Special thanks to Chad for the tour– it’s fantastic to see a little bit behind the scenes like this!

This entry was posted in Engineering, Field Trips and tagged tesla. Bookmark the Permalink.