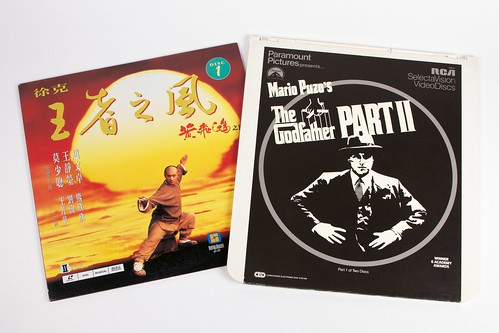 OMG—Is that Once Upon a Time in China IV?

Well, yes, but that’s not what we’re here to talk about. We’ve dug up specimens of two very different types of high-tech video playback media from decades ago— and it’s much more interesting than you might guess. 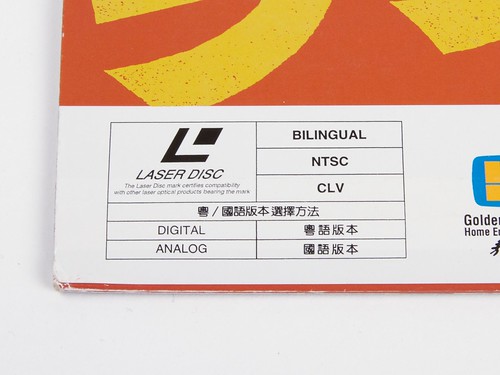 LaserDiscs were a popular precursor to the DVD, with relatively high density optical storage of video, audio, and data. They were invented in 1958, and first came on the market a full twenty years later in 1978. This made them concurrent with VHS video tape and CDs. They were common even in video rental stores until the mid-1990s. They could store 30 or 60 minutes of video on each side, with a track that was 42 miles long.

A LaserDisc is 30 cm (12 inches) in diameter, and weighs about half a pound. Overall, the appearance is just that of an overgrown CD: 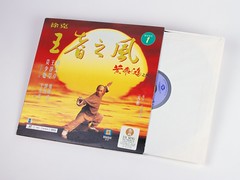 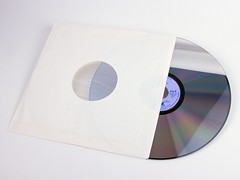 Both the video and audio signal were initially analog, using pulse-width modulation to encode the signal. Later versions used digital audio as well.

The popularity of LaserDiscs gradually waned (even in Japan where they were more common), and production of discs ceased around 2001, with players being made as late as 2009 in Japan. 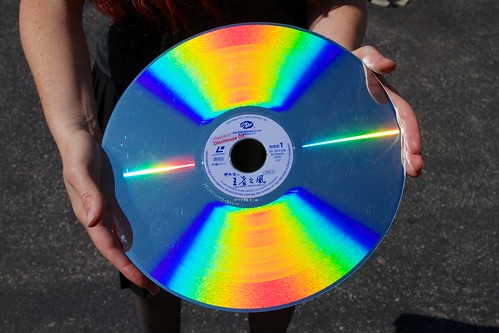 Technological factors aside, a LaserDisc is also one hell of a rainbow making machine. Much more so than a CD, even. Out in the sun, the camera cannot quite capture the intensity of the reflected spectrum. (As we have noted before, digital cameras are designed to photograph reflective subjects, and do not have the dynamic range necessary to record intense colors properly.) 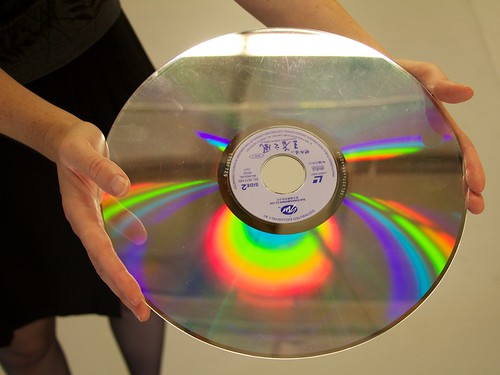 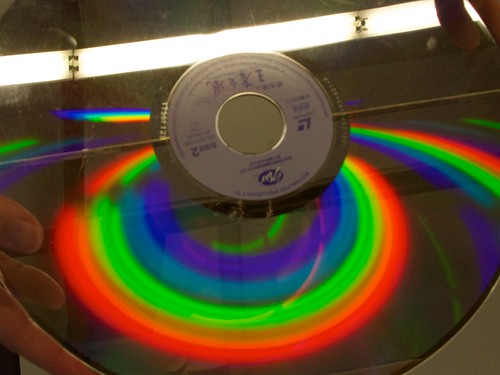 Back inside our shop, the “rainbows” look completely different!

Why is that? The continuous rainbows that we see outside are the result of looking at the “white” spectrum of sunlight— which contains a nearly perfect continuum of colors of light. (There are some skinny absorption lines in there, but they’re too fine to make out with this limited technology!) But when we look at the reflection and refraction of our overhead fluorescent lights in the lab, we don’t see that at all.  Instead, we see distinct (albeit curved) images of fluorescent tubes in five distinctly separated colors:  Red, Orange, Green, Blue, and Violet.

It turns out that what we usually see as “white” from fluorescent lights is almost the exact opposite of a real “white” spectrum.  It’s actually a set of distinct colors, chosen in proportion and intensity to trick human eyes (with our red, green, and blue sensors) into perceiving the light the same way that we perceive light that comes in a continuous spectrum.  (If earthlings ever receive intelligent visitors from other worlds, we could imagine wars being started over this kind of thing.)

The particular lines that are present in our fluorescent lights (the Red, Orange, Green, Blue, and Violet) result from a combination of the excitation spectrum of mercury and phosphors (e.g., europium based) that are added to produce the red elements of the spectrum.  (Here’s an example spectrum for cool white fluorescent bulbs showing which elements cause each of the lines.) 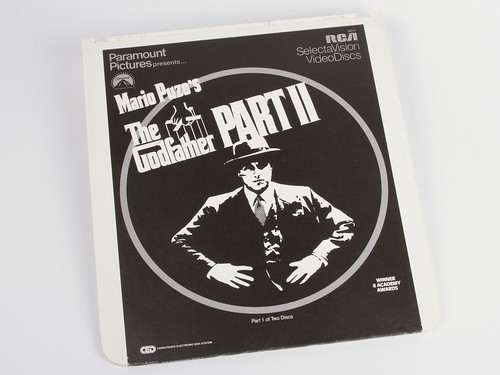 Let’s take a look at our other specimen, a VideoDisc. At first glance, you might not notice that this copy of The Godfather Part II is any different than the LaserDisc that we just looked at. 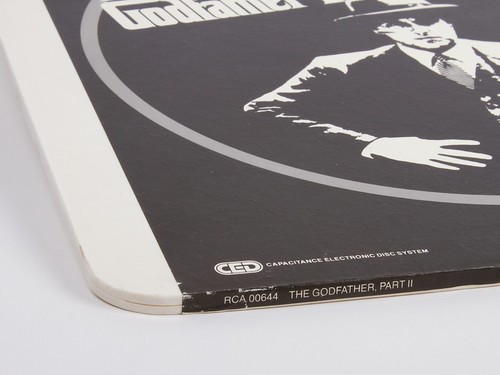 However, it comes not in a paper sleeve, but in a rigid plastic case— and what exactly is the “Capacitance Electronic Disc System?” 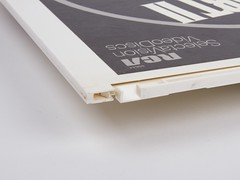 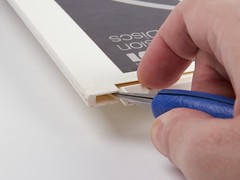 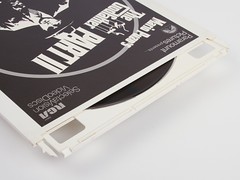 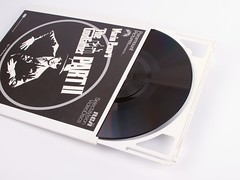 To get the disc out, there is a spring clip to release a carrier tray. The disc inside— to first impressions —looks and feels like a standard vinyl LP record. It’s light weight, slightly flexible, and dark. 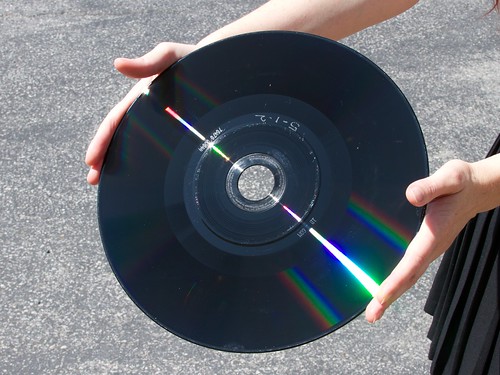 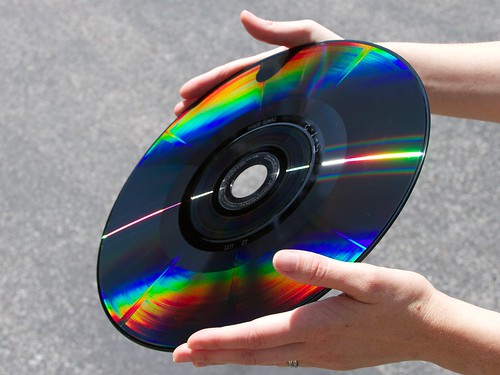 But when you take it out into the sunshine, it doesn’t look a bit like a vinyl record— it gleams like a black opal; like what could be the love child of the LP and the LaserDisc.

You might think that it would need some extremely fine patterning to make it that beautiful, and if so, you’d be right. This disk is actually a grooved vinyl platter— just like an LP —except that it has a conductive surface and a microscopic groove.

How microscopic? The groove is only 657 nm wide (comparable to the wavelength of red light; about 1/200 the width of a human hair), and can be up to 12 miles long. A titanium plated needle, riding ever so gently in that tiny groove, detects changes in capacitance as the air pressure changes between the needle and the variations in the groove in the conductive vinyl disc.

This varying capacitance in turn alters the frequency of a resonant circuit, producing an FM electrical signal which is then decoded into video and audio signals by the player’s electronics. (wikipedia)

So, it really is just a “modern” evolution of the LP.  And, you can see why it comes in a rigid case.  The least scratch would destroy it. 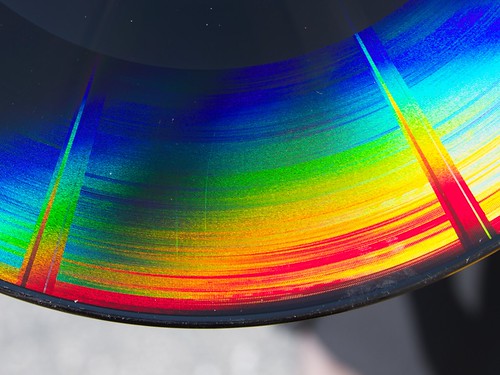 If you look closely, you’ll see some spoke-like features in the pattern on the disc. This indicates that the VideoDisc rotates at constant speed during playback.

(The lack of any regularly repeating pattern like this on our LaserDisc is a good hint that it does not follow the same scheme. Indeed, if you look closely at the LaserDisc packaging that we showed earlier, you’ll see the “CLV” mark, indicating that it spins at constant linear velocity— changing rotation speed as playback progresses.) 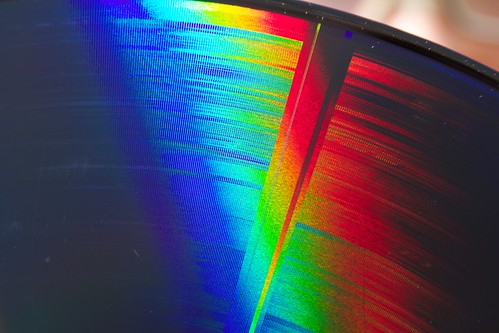 VideoDiscs came out in 1981, after a long 17 years in development. Players were only in production until 1984, and disc production stopped in 1986.

Not only was it late to market, but it came to be known by that name (“VideoDisc”) that was unfortunately, confusingly similar to “LaserDisc.” And so they went away, as did LaserDiscs later when DVDs became popular. 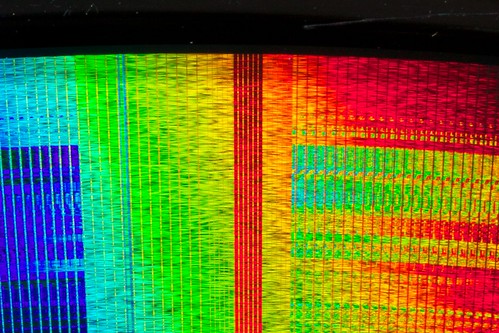 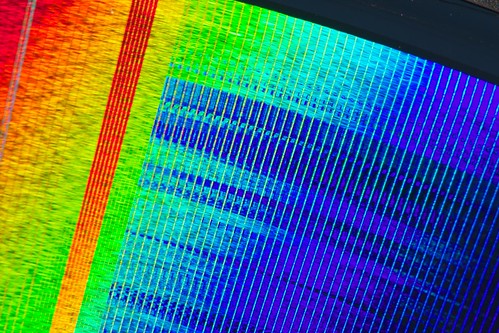 Decades later, the VideoDisc is far more obsolete than even a LaserDisc.

But it remains a remarkably beautiful piece of technology.