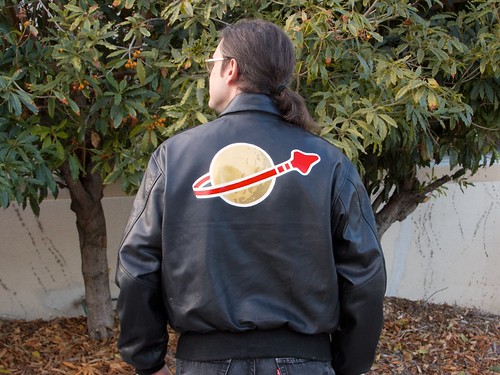 Here’s a little project that we’ve been working towards for a long time: a custom-painted leather flight jacket (“bomber jacket”) featuring the “Classic Lego Space” logo.  (Yes, I totally spent years serving in the Lego space corps!)  And, if you’ve ever wanted to make your own painted leather jacket — whatever the theme — here’s how to do it. 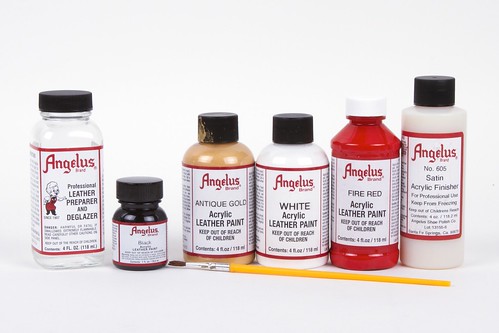 The Paints
For this project we used Angelus leather paints, which are highly flexible acrylic paints from the Angelus Shoe Polish Company, designed specifically for painting shoes, jackets, and so forth. We used black, metallic gold, white, and red paints, which are  available in 1 oz and 4 oz (and sometimes larger) bottles. For reference, we ended up using less than 1/2 oz of each paint color in this project; we could have gotten away with a 1 oz bottle in each color.

Besides the paints, you’ll also need their “Leather Preparer and Deglazer” (for which some people simply substitute acetone), and a clear acrylic top coat finisher.  We also used a couple of different natural-hair paint brushes of different sizes. 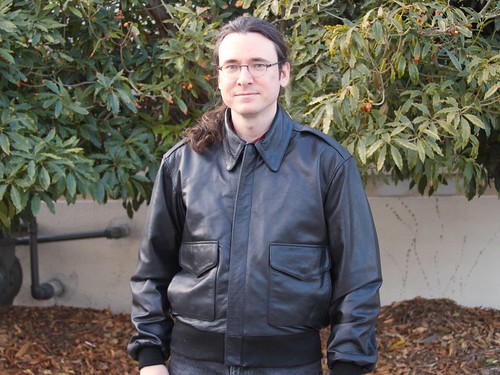 The jacket is a “black current issue A-2” leather flight jacket from US Wings, an updated version of the iconic A-2 jacket, famous for use by pilots in WWII, and well known as the classic substrate for painted bomber jackets.  The “current issue” version of the jacket has the same extra pockets that current-issue military A-2’s have, and given the choice between brown and black, black looks more like outer space. This particular model also has a solid one-piece back, so that there aren’t any seam lines where we’ll be painting.

It’s certainly possible to start with a lower-cost jacket, or to get an older/used jacket for much less. However we are following a piece of advice that we learned from our friends in the art car community: If you’re going to invest the time in decorating a car, it’s a good idea to start with a new one, so that it lasts longer and you have fewer maintenance issues. 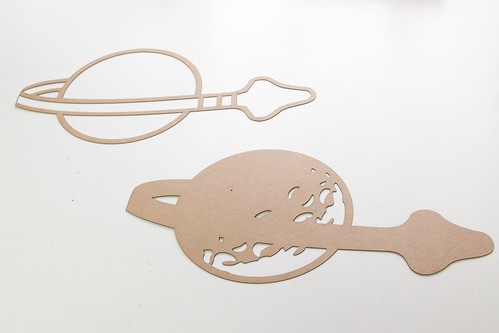 The design is the “Classic Lego Space” logo, a design no longer in use but prominently featured in popular Lego sets like the #497 Galaxy Explorer and on space-themed minifigures during the era, 1978-1987.

Aside: We recently reviewed the book Lego Space, about the same era, after this jacket project was already underway.

If you look closely at the pictures of the Galaxy Explorer and minifigures, you might notice that there are actually two versions of the graphic from that era. One, found on larger bricks and flags, has a light-yellow moon with darker craters, while the other, found on small bricks and minifigures has a metallic gold circle without craters.   Since the design on the jacket is large, we went with the cratered version, but exercised a little artistic license to pick light and dark metallic golds (rather than yellows) for the two colors.

For the next step, we modeled the logo in Inkscape, based on some high-resolution pictures of bricks, and laser cut templates out of cardstock to mock up how it would look on the jacket, in a range of different sizes and positions. 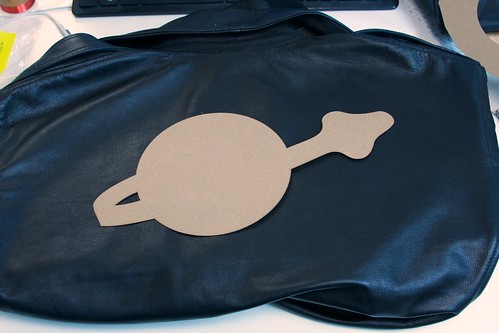 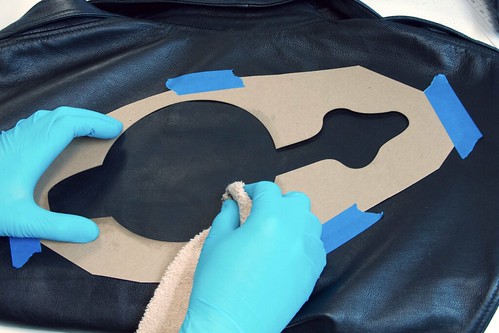 Once we had figured out where to position the logo on the jacket, we took the cardstock mockup and temporarily fixed it in place with rolled up pieces of blue painter’s tape, so that we could flatten that side of the jacket up against a board without losing track of position.  We then used that positive mockup to position a (negative) stencil, again held in place with tape, and removed the mockup.

With the stencil in place, we used the “Leather Preparer and Deglazer” solution to strip the shiny outer finish off of the leather.  Doing a thorough job of this took about 30 minutes of hard scrubbing with a washcloth, leaving the cloth thoroughly blackened and that area of the jacket still black, but with a matte finish.  It’s a very good idea to wear gloves for this step; you probably don’t need to strip the finish off of your fingers. 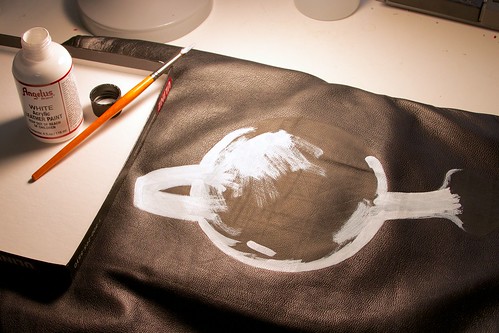 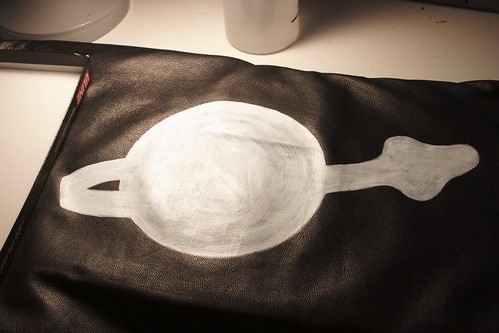 After the leather dries from the prep stage, it’s time to begin painting.  Angelus recommends to make the first layer thin, and to allow it to dry thoroughly before adding the subsequent 2-3 layers that are necessary to reach full opacity.  We used white for our base layer, even under the parts that will be red or gold in the final painting.  As you can see, the brush strokes are quite visible and the opacity is only marginal with only a single layer.

There is a sense in which this is the easiest layer of painting, because — with the exception of that little black triangle — you can just paint over all of the areas that have that initial matte appearance. 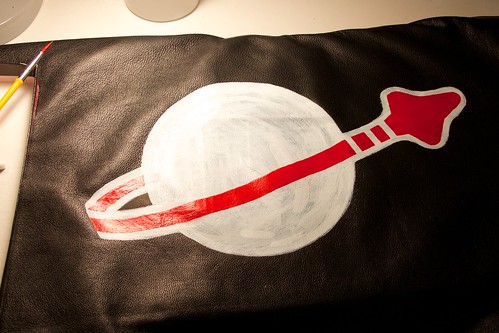 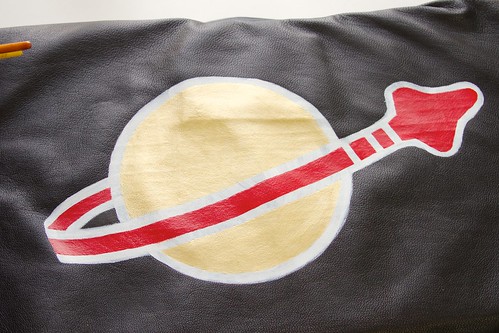 To indicate where the red and gold should go, we lightly scored the white paint while tracing the pattern out with a stencil.  That left some (barely visible) marks to follow while painting on the first layers of red and gold.  At this point, there is one layer of white, plus one layer of gold, and one layer of red.  You can already see that the red and gold areas are much more opaque than the white regions, since each has two layers of paints, not one.  After this, we let the paint dry for at least 30 minutes before doing the next layer, and alternated between adding more white and colored layers. 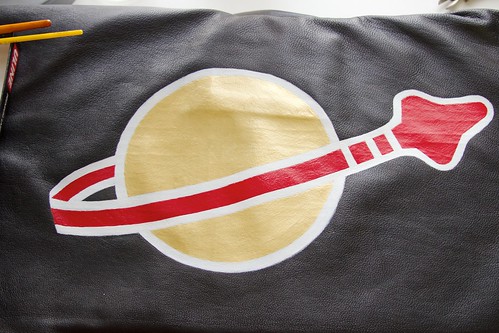 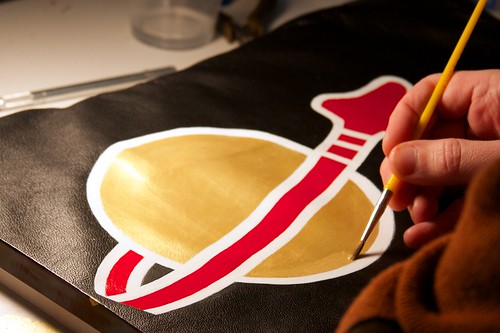 After four layers of white and three each in red and gold, the white and colored areas were finally all well defined, bright, and distinct. Painting the interior curves to appear smooth took a fair amount of time and steady hands. 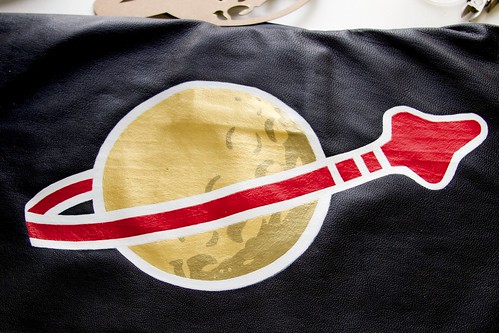 Angelus only offers a single (but gorgeous) shade of metallic gold paint, which is alternately referred to as “Antique Gold” or just “Gold,” depending on bottle size. However, the paints can be blended to make new colors, and so we made a small bottle of darker gold paint by taking the (regular) gold and mixing in a few drops of black. 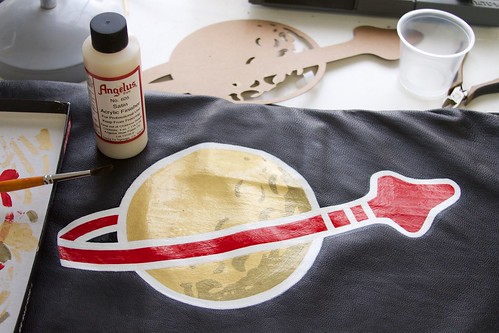 After allowing the paints to dry overnight, it’s time to add the final top coat: a thin and colorless acrylic paint finish that dries clear.  The finisher is available in five different lustre levels, from matte to glossy.  We picked “Satin,” the middle of the five levels, which turned out to be considerably more glossy than the rest of the jacket.  If we had to start over, we likely would choose the least glossy finisher.  We applied two coats of the finish, and allowed it to dry overnight one last time. 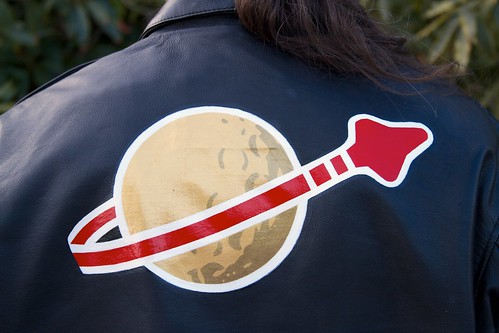 And we’re done!  One of the tricky choices that we had to make was as to how the design should be centered.  It looks like it’s a bit left of center, and in a sense it is.  If you take a close look at how the original logo was used, you’ll find that the full width of the design is actually centered on the brick (as you can see in the photo here) or minifigure, rather than being positioned with the moon centered.  We decided to emulate that to the extent possible, weighting the logo slightly to the side. 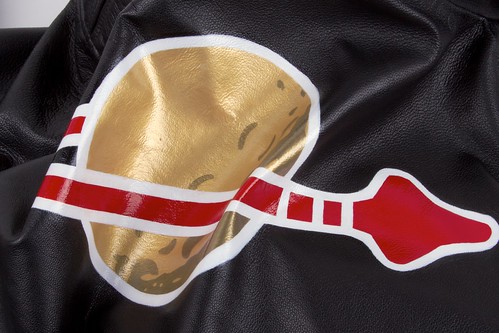 And a final word about the paints: These paints are (as advertised) incredibly flexible and well matched to leather.  You can flex and fold the material, and the paint goes right along with it, flexing and folding as though it isn’t there at all. Neat stuff!