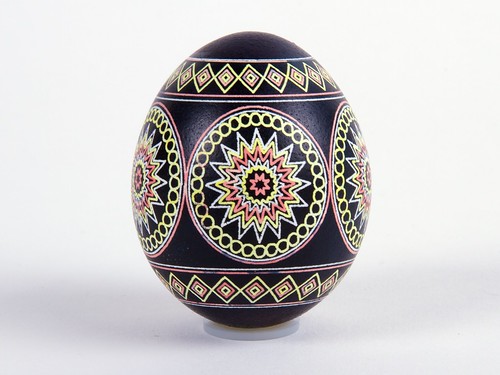 In our annoucement article about the EggBot Electro-Kistka — the hot wax dispenser for the EggBot — we noted that it can be challenging to reposition an egg after taking it out to dye the egg between wax layers.

Could you leave the egg in the EggBot and paint on the first layer(s) of dye with a brush? Then dip the egg for the last layer to get the ends covered.

Well, let’s try and see how it turns out! 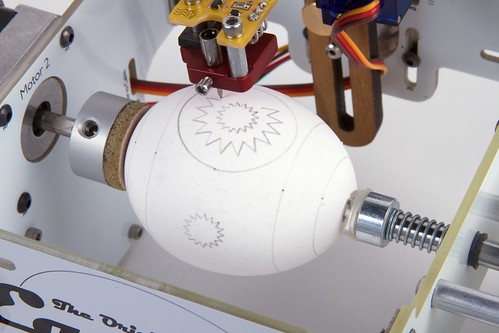 We begin by laying down a first layer of wax on the white surface of an egg. The areas that are covered by wax at this stage will remain white white when we remove the wax at the end of the process. 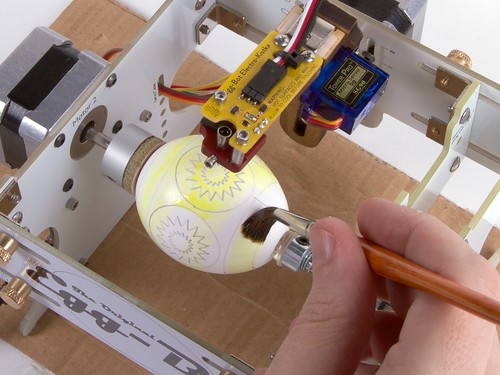 After the first layer is complete, we start the dyeing process. We’re using a watercolor brush to paint on the first dye: a yellow dye from our set of intense batik dyes. We brush it on by hand, in several layers, without removing it from the EggBot.  During the process, we use the EggBot’s motor 2 (the “egg motor”) to rotate to different angles and allow the egg to dry with different sides facing down. 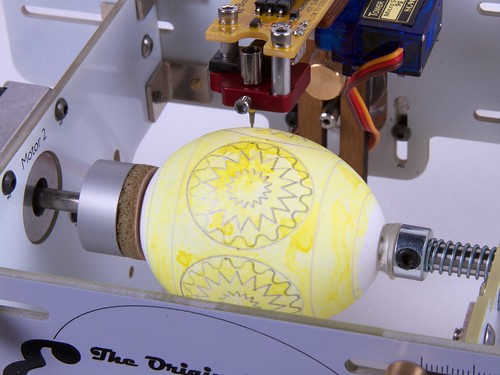 The end result — after several layers and allowing the egg to dry in several different positions — is very blotchy and not very impressive. During the painting process, the wet dye flows awkwardly into areas bounded by the wax lines, driven by gravity. And to make matters worse, the color is much more intense where the dye has been thicker. Let’s push on anyway, and see how it turns out. 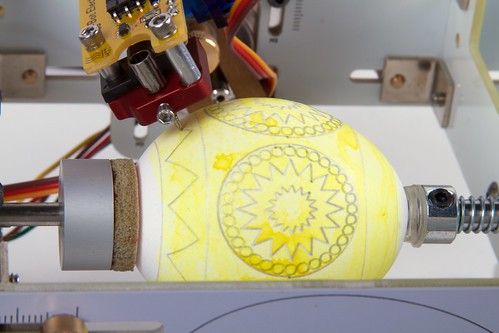 Here, we are painting the second layer of wax, which will define the areas that will end up yellow at the end of the process. 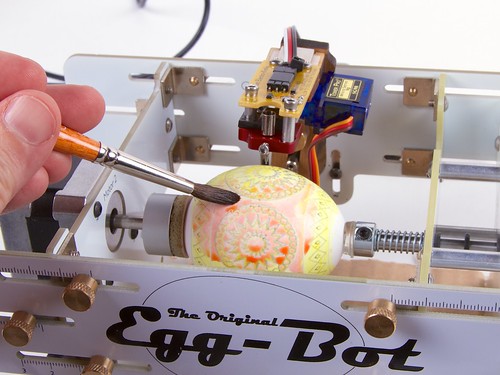 After the wax is done, we begin painting on the red dye. You can immediately see how the dye “bunches up” in areas bordered by the wax lines. 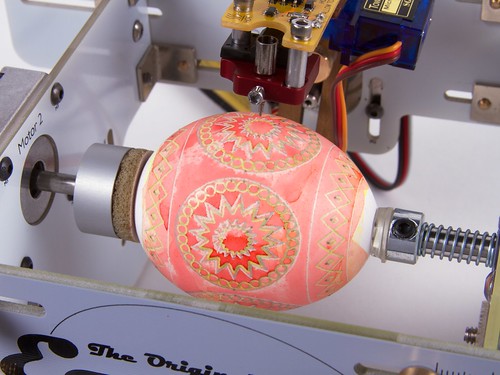 Holy McBlotchy! When the red is done, the coverage is anything but uniform. This red is normally very intense (example), but even after painting on several layers of dye over the full egg and allowing it to dry at a different angle for each, it’s blotchy and only occasionally intense. 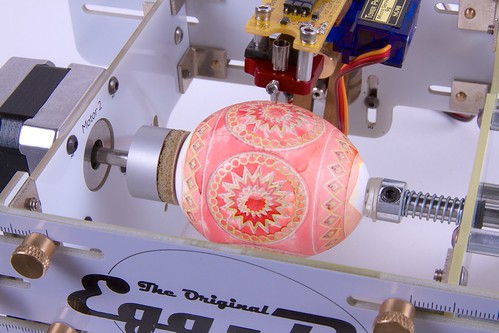 Pressing on, we add the final layer of wax, which will define the areas to remain red at the end of the process. 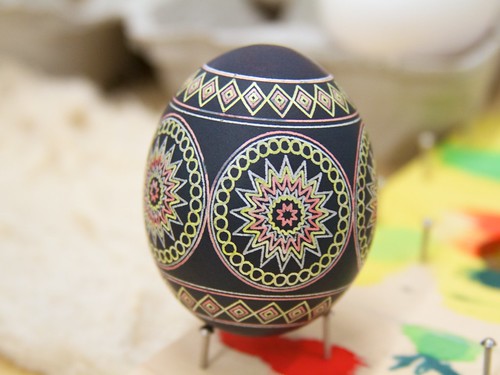 All done with wax, we remove the egg from the EggBot and dip it (the traditional way) into our black dye for a few minutes, and then allow it to dry.

Finally, we blow out the contents of the egg and use a hot air gun to remove the wax.

The good: The inter-layer alignment was trivially easy, and the results are reasonably good for the level of detail that we are using.  Note, for example, how the thin horizontal stripes keep a constant distance from one another, and how the diamonds near the top and bottom are nicely centered. Both of those were hard to do when re-aligning the egg by hand.

The bad: (part a) Dyes made for eggs are meant to be used on eggs that are submerged in the dye.  Brushing them on by hand left a blotchy appearance, without the kind of intensity that we normally expect from these kinds of dyes. Our yellow and red ended up more as pastel tones than vibrant colors.

The bad: (part b) Normal use of the EggBot (with pens or the Electro-Kistka) is pretty quick, but this process is actually annoyingly slow, because you need to wait for the dye to dry before drawing the next layer.

The ugly: Take a look at the red (well, pink) circle near the top of the egg: 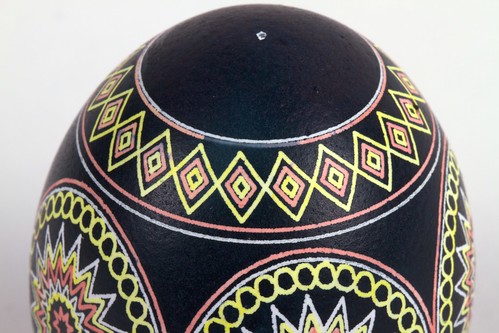 A section of the wax on that circle came loose while in the black dye, allowing that area to darken.  If you look closely at the rest of the egg, you may be able to find a few other areas  in which the wax came loose from the red or yellow — but not white — areas.  Our best guess is that this is a side effect of the blotchy dye application.  The wax adhered very well to the plain-white areas, but not 100% of the time where the dye was thick or uneven.

In conclusion, this method does work, but not as well as we might have hoped, due to the difficulty of actually dyeing the egg in place. Another approach that we’ll look at soon will be to rigidly attach the egg to a repositionable coupler with beeswax. That should allow us to take out the egg and dye it (coupler and all) and then easily index it back into the EggBot.

9 thoughts on “Electro-Kistka: Dyeing an Egg in Place?”