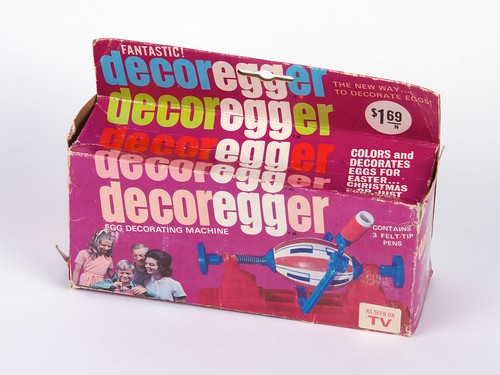 Hey look! It’s the fossilized remains of a possible evolutionary ancestor of the EggBot! 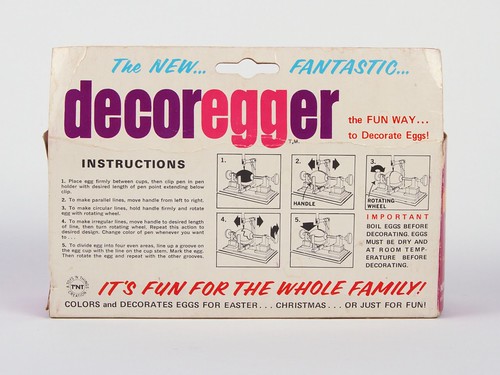 Okay, it’s pre-USB but technically it’s not a fossil. Like many of us, the decoregger dates from the mid-1970’s. It’s a simple function gadget that mounts an egg so that you can spin it, with arm second arm that holds tiny felt-tip pens.  Curiously, there are also some contemporary machines bearing the same name that lack the separate arm. 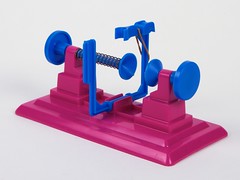 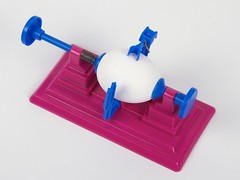 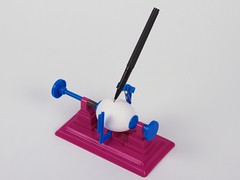 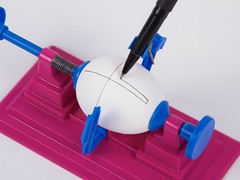 In the upper-left photo, you can see that the pen holder has a separate “paddle” that you hold, to manually move the pen in the arc across the egg surface.  Lacking the proper felt-tip pens, we found that a uni-ball micro pen was about the right diameter to fit in the holder.

One surprising thing: To model this thing, we used regular “large AA” (not extra large, and not jumbo) size eggs from the grocery store. And it was only barely possible to squeeze the egg into the holders. From the picture on the box, it looks like there’s plenty of room for even the largest egg.  Possible explanation #1: Plastic shrinks over time. Possible explanation #2: The egg pictured on the box is from the advertising land of freaky micro-children.

But in any case, the decoregger is a cute little machine, and it looks like it might be fun to play with.  The actual play is a matter of turning knob 1 and knob 2, so it feels a lot like an Etch-a-Sketch in spherical coordinates. Now if only there were some way to strap a couple of motors to it and perform a CNC conversion…. 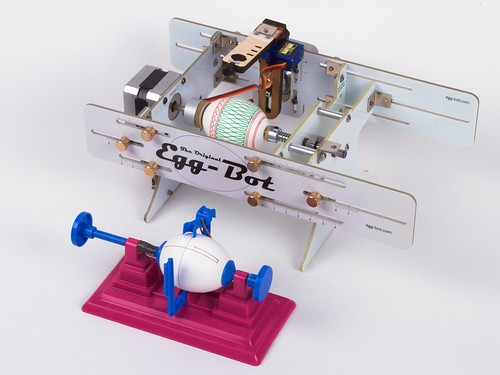 Speaking of which, it really is a lot smaller than the EggBot.  Heck, you could probably fit the whole thing inside the EggBot. 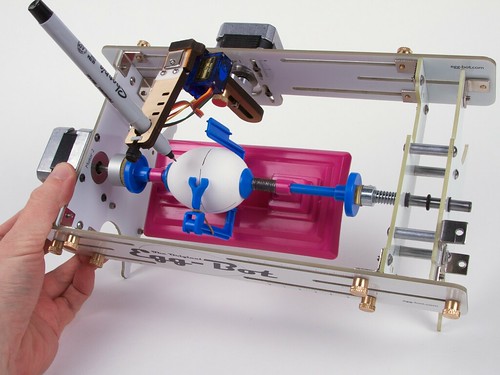 Wait — am I doing this right?

Special thanks to Michelle Hlubinka for finding this artifact and sending it to us!