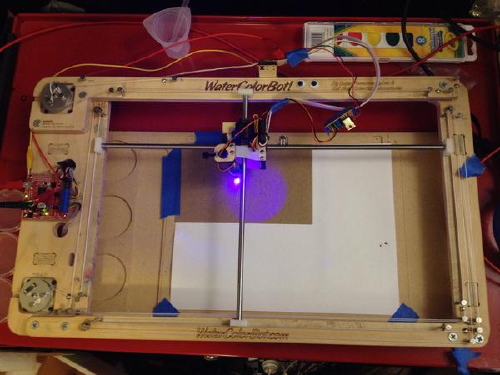 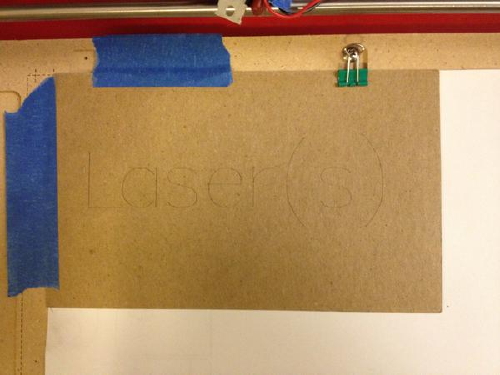 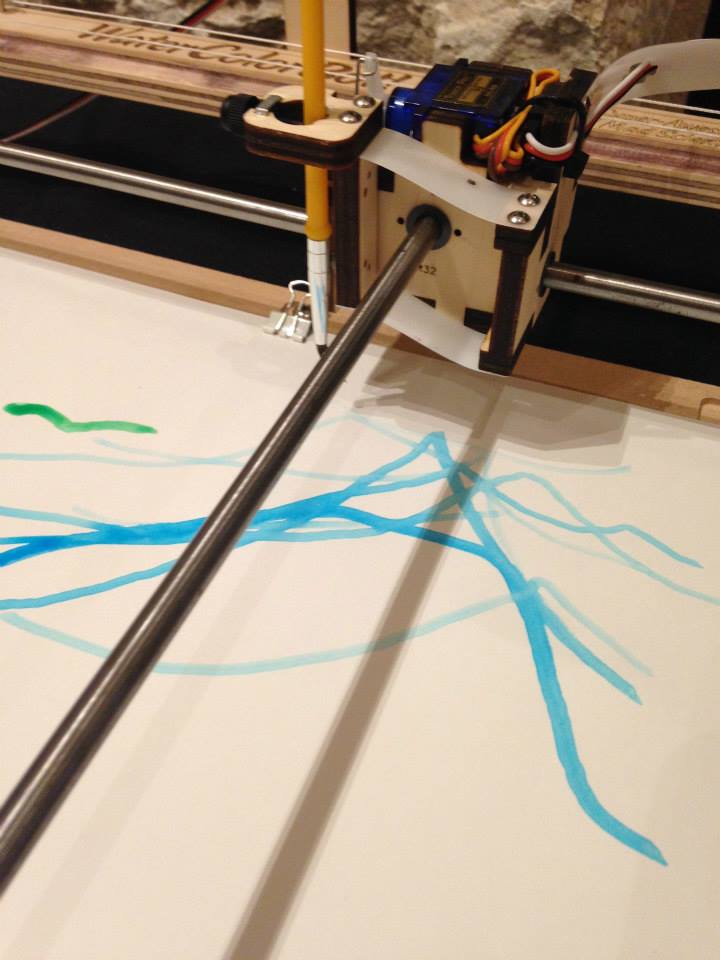 The Hill Country Science Mill is celebrating its grand opening on February 14th. It’s a new science center in Johnson City, Texas housed in a historic feed mill built in 1880 as a steam grist mill and cotton gin. This picture of their WaterColorBot is from a preview day in November. A “Fall in Love with Science” event sounds like a great way to celebrate Valentine’s Day!

This entry was posted in Education, Science, WaterColorBot. Bookmark the Permalink. 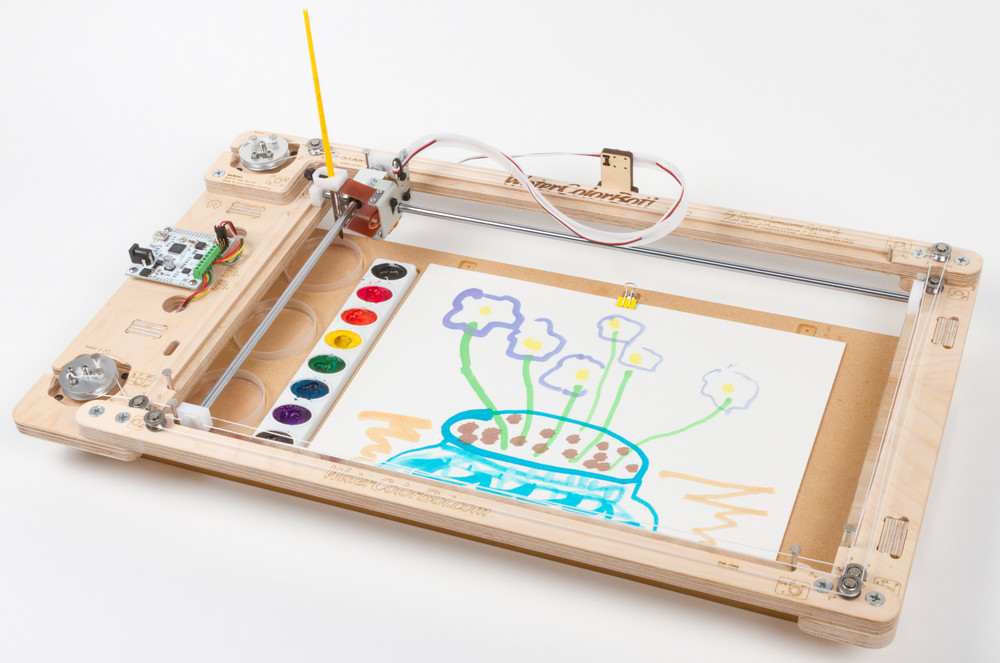 We are very pleased to introduce something that we’ve been working on for most of this year: WaterColorBot version 2.0! 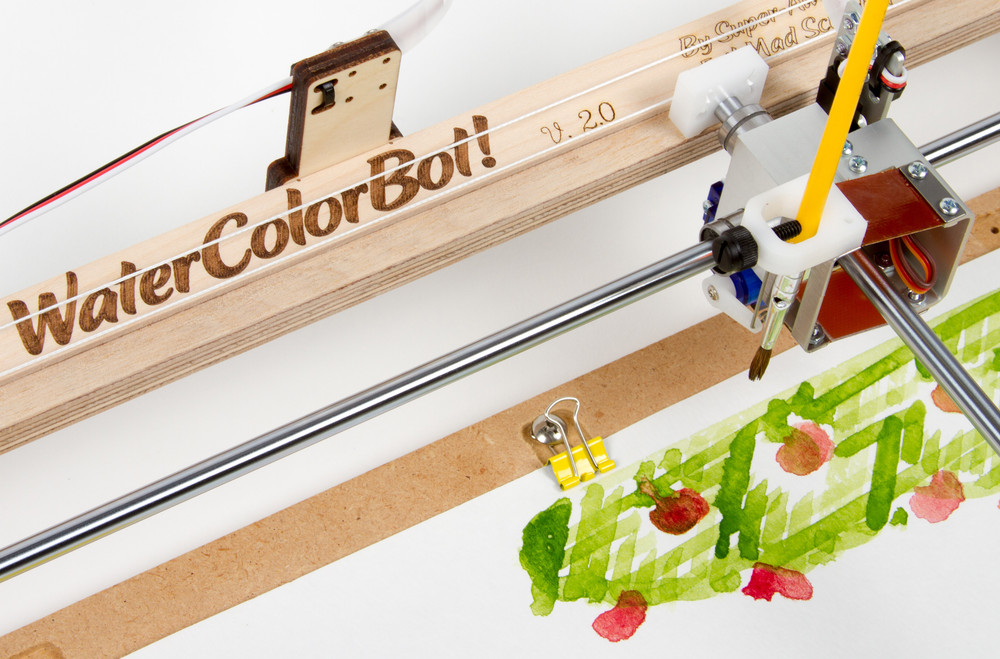 The WaterColorBot is our collaboration with Super Awesome Sylvia: A friendly art robot that moves a paint brush to paint your digital artwork onto paper, using a set of watercolor paints.

Version 2.0 brings it to the next level with some greatly improved hardware. First and foremost, the carriage that holds the brush has been completely redesigned:

The carriage on the original WaterColorBot was made from laser-cut plywood, with nylon bushings and two simple delrin strips that formed the vertical flexure translation stage. (You can read more about the original carriage here and here.)

The new carriage consists mainly of two pieces of metal. The center block of anodized aluminum is CNC milled, and houses crossed linear roller bearings. Wrapped around that is a laser-cut and formed aluminum part that mounts the brush-lift motor, cable guide, and the flexure stage.

The new flexure stage is built with two custom flex circuit boards, used in this case as mechanical flexures. Each board consists of a very thin (0.1 mm, 4 mil) Kapton sheet with a thin fiberglass (G10/FR4) stiffener on its center section. With the two ends of each sheet clamped rigidly and the stiffener in the center, each flex circuit is to flex only along two well-defined lines. And with two boards, it forms a neat parallelogram linkage, without the slop that one might encounter in multi-part hinges. The net effect is that this new flexure stage has remarkable stiffness compared to the old design. 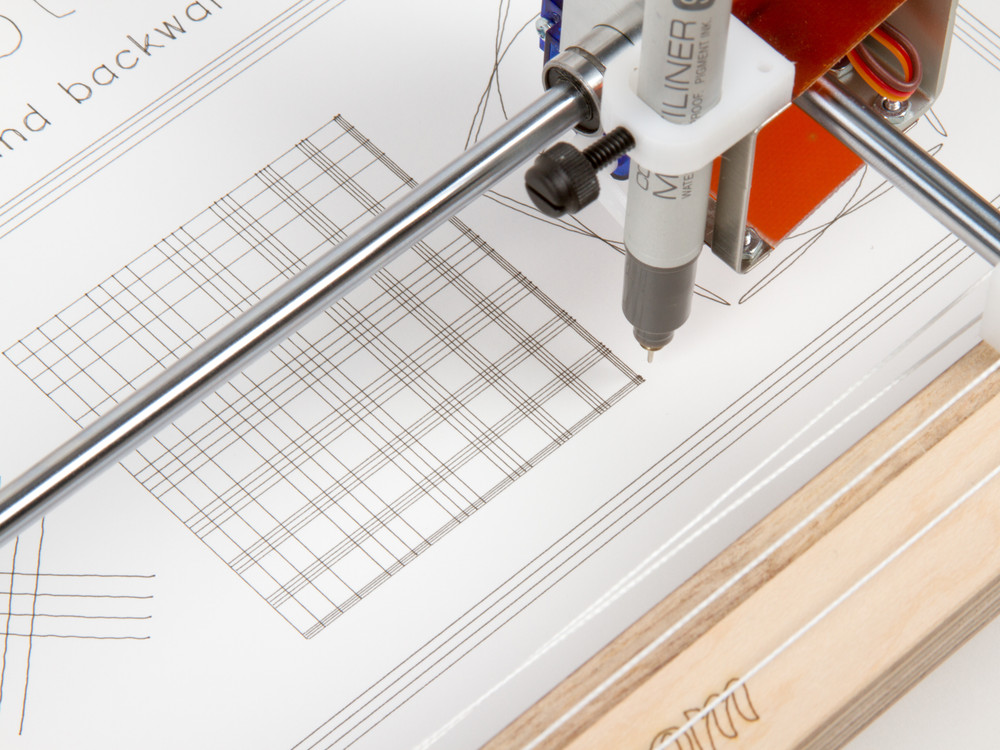 That stiffness, combined with the improved performance of the linear ball bearings makes this a more precise WaterColorBot. Not that you could even detect the improvement with a fat brush and watercolor paints, but things are looking quite good even with using ultra-fine point drawing pens, as you can see above. 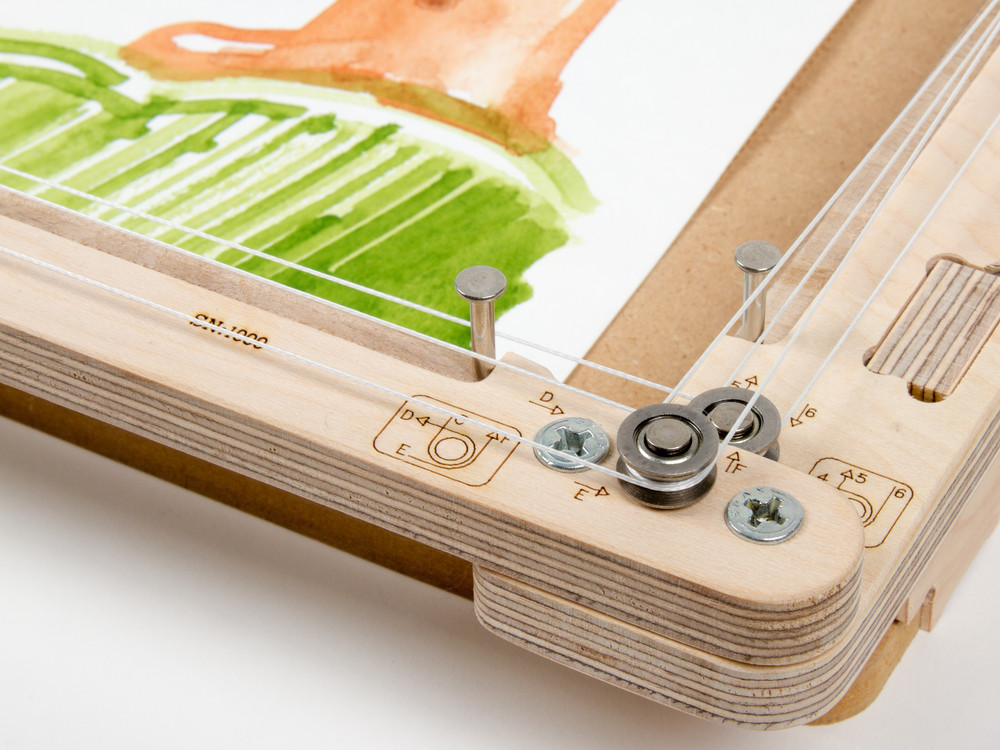 The second major change is to the system of Spectra cords that the stepper motors control in order to move the carriage. Previously, the cords were guided around 11 plain bearings (stainless steel solid rivets) and 3 ball bearings.  We’ve simplified this into an arrangement of just 8 ball bearings— four for each motor. The ball bearing pulleys have also been updated to use wide V-groove bearings that are easy to wrap the cords around.

Which brings us to the third (and last) major change. Thus far, WaterColorBot kits have shipped “some assembly required” — with all the major components built, but the cord lacing left to the end user. As of 2.0, WaterColorBot kits now come fully assembled and tested. That doesn’t make them any less hackable, but it does mean that you can get up and running faster. 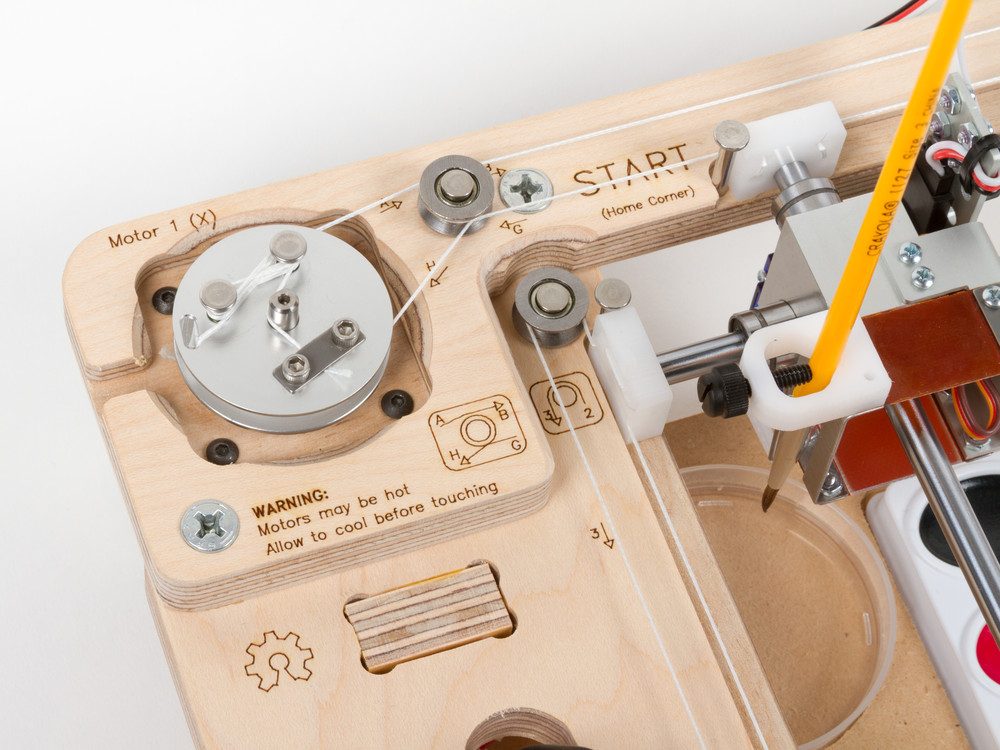 Version 2.0 includes the same CNC machined aluminum winches that we introduced back in August. Tiny detail: we’ve carved a subtle indentation into the wood around the winch that makes them a little easier to turn by hand. 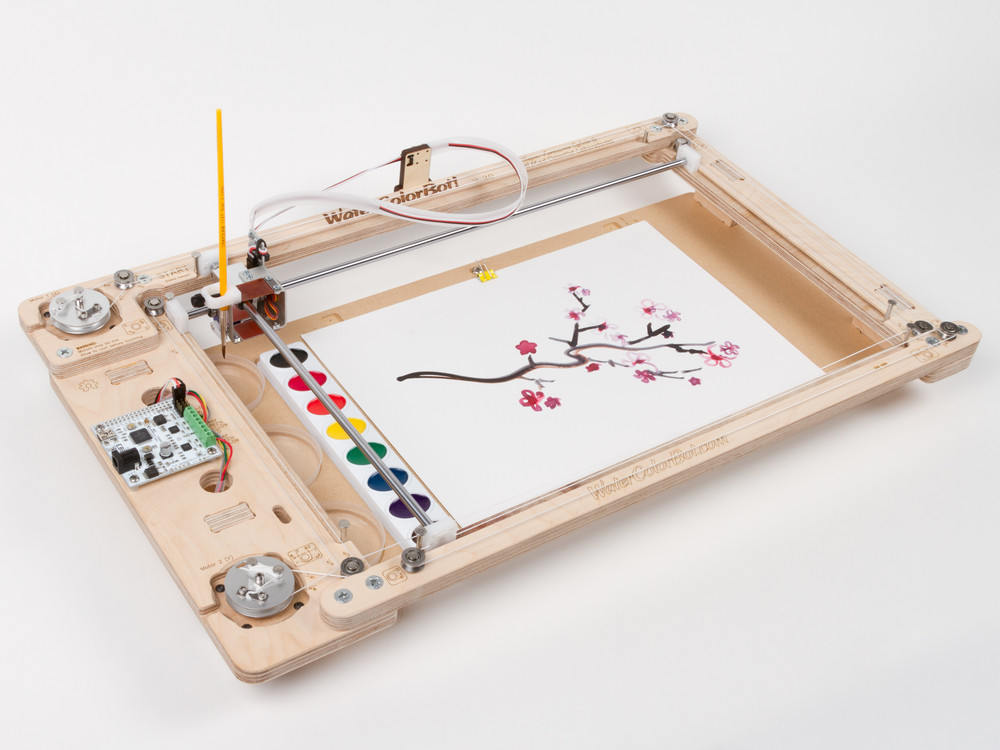 The new WaterColorBot kits will begin to ship right after Thanksgiving. And a bonus present for the holiday season: Version 2.0 is priced the same as the previous version, it’s just a whole lot more awesome per dollar. 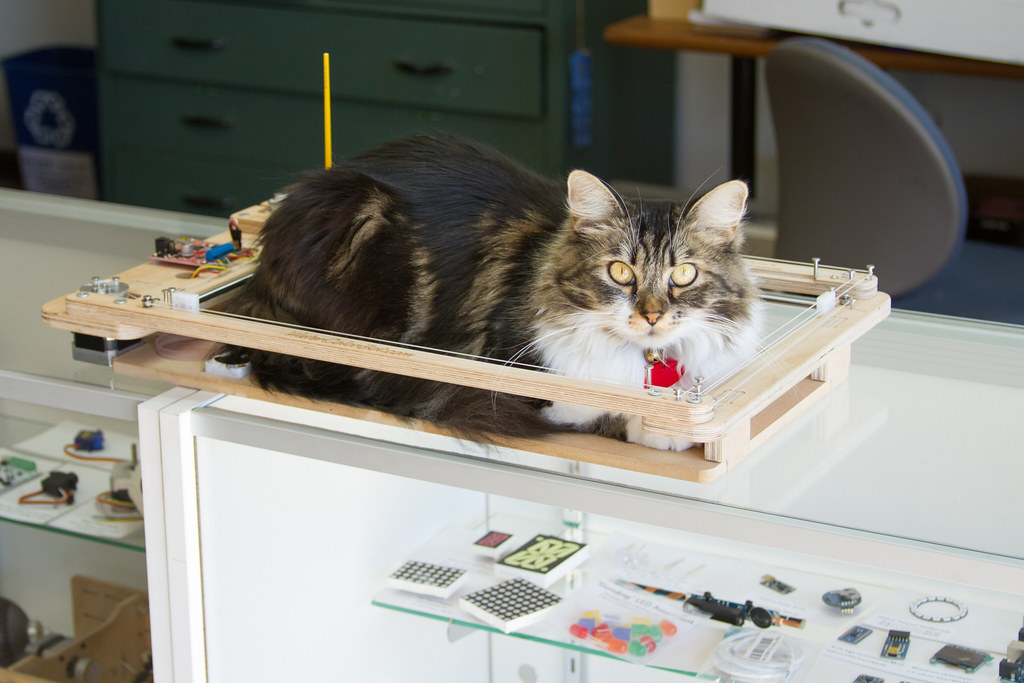 Zener, our full-time shop cat, has discovered an unexpected application for the WaterColorBot. Not certain if we should add “cat bed” to its list of features.

This entry was posted in EMSL Projects, Everything Else, Evil Mad Scientist Shop, WaterColorBot and tagged cats. Bookmark the Permalink. 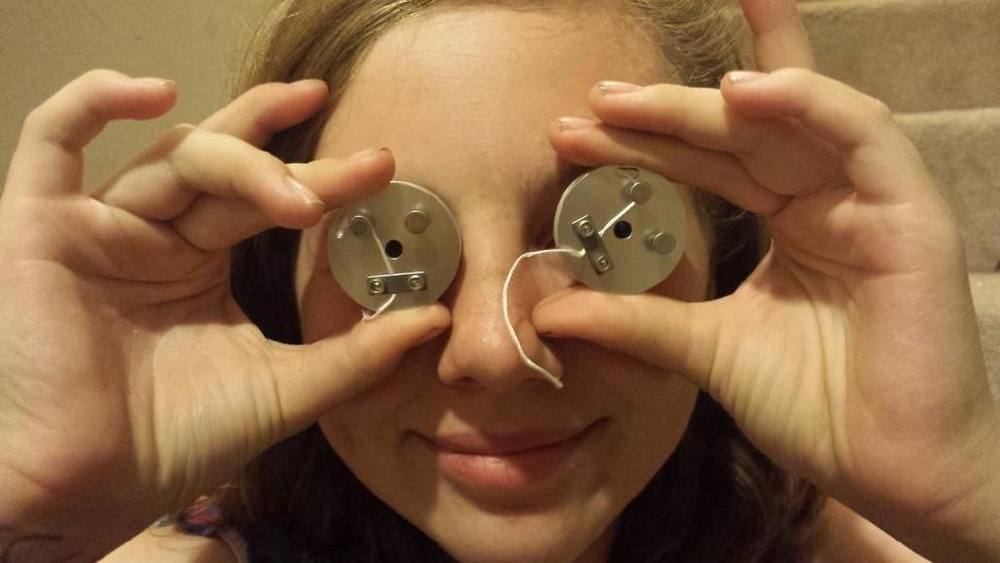 Oh mah glob guys…I got some new winches for the watercolorbot!! Made of metal peeps!! :D #coraline #watercolorbot

This entry was posted in Engineering, WaterColorBot. Bookmark the Permalink. 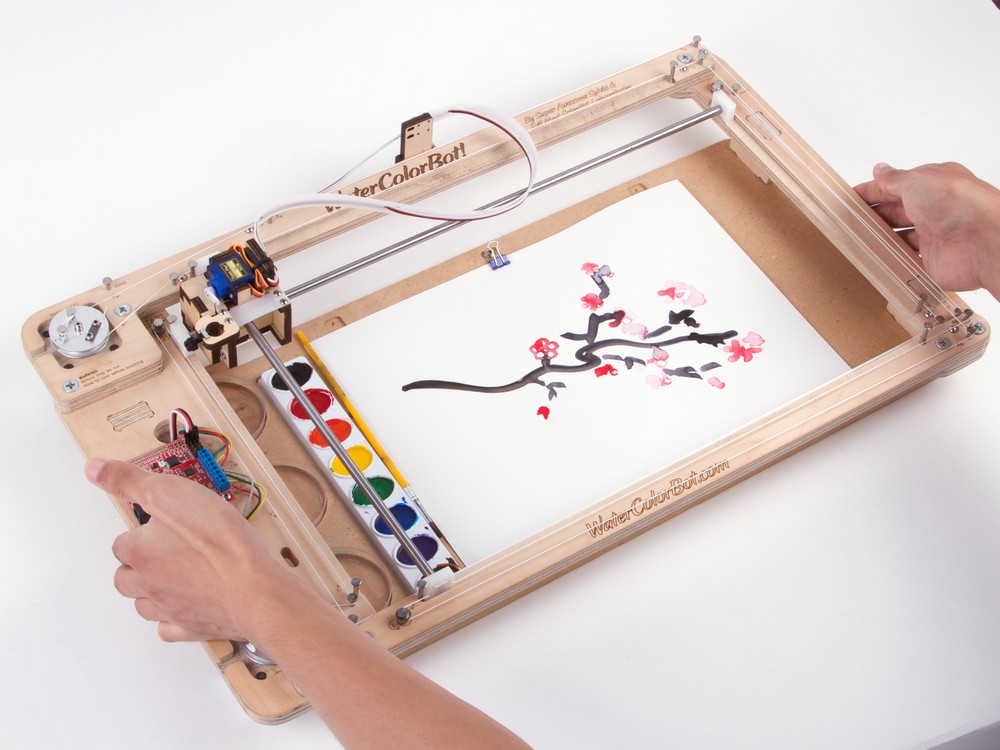 We’ve just given the WaterColorBot a little bump up to kit version 1.5. The new version now comes with a pair of beautifully machined aluminum winches. 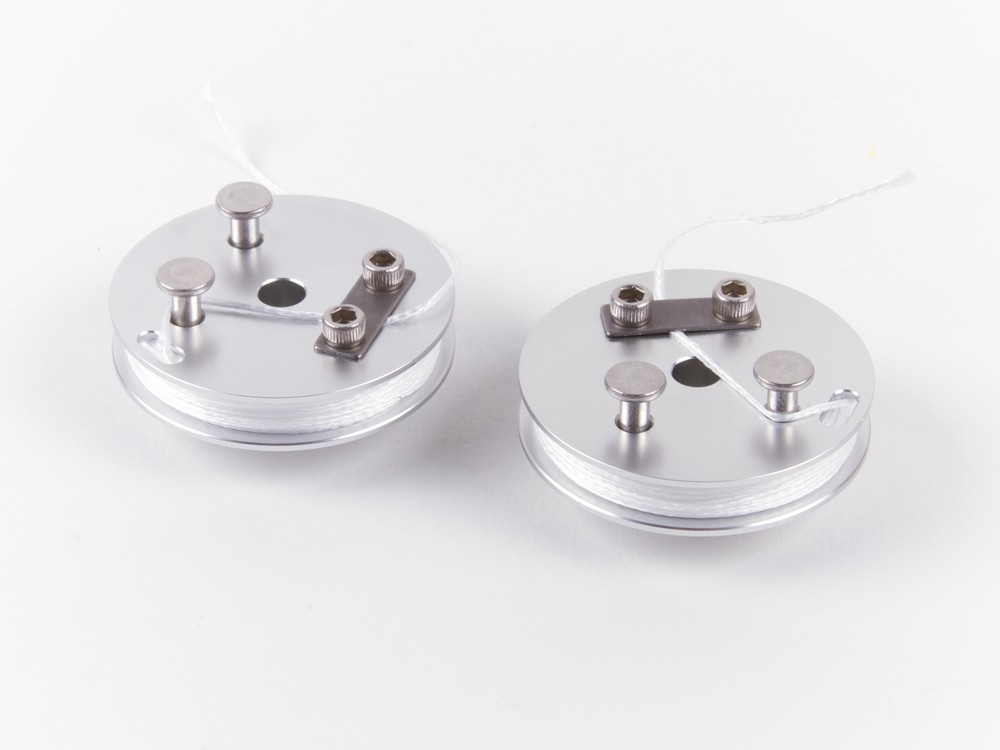 The winches are precision cut on CNC machines and anodized clear. We add a few extra little parts (flat-head rivets to wind the winch around, screws, and a stamped and polished stainless steel “clamp” to hold the string end), and wind them with the same “100 pound” Spectra cord as we did before.

We described the process of making and winding our older laser-cut wooden winches in our blog post about the making of the WaterColorBot, and again in our post about the  winch cutting jig. For better or worse, transitioning to the new aluminum means that we’re no longer using our older wooden winches that we described in those blog posts.  But in the end, these new winches are a better, more elegant solution. 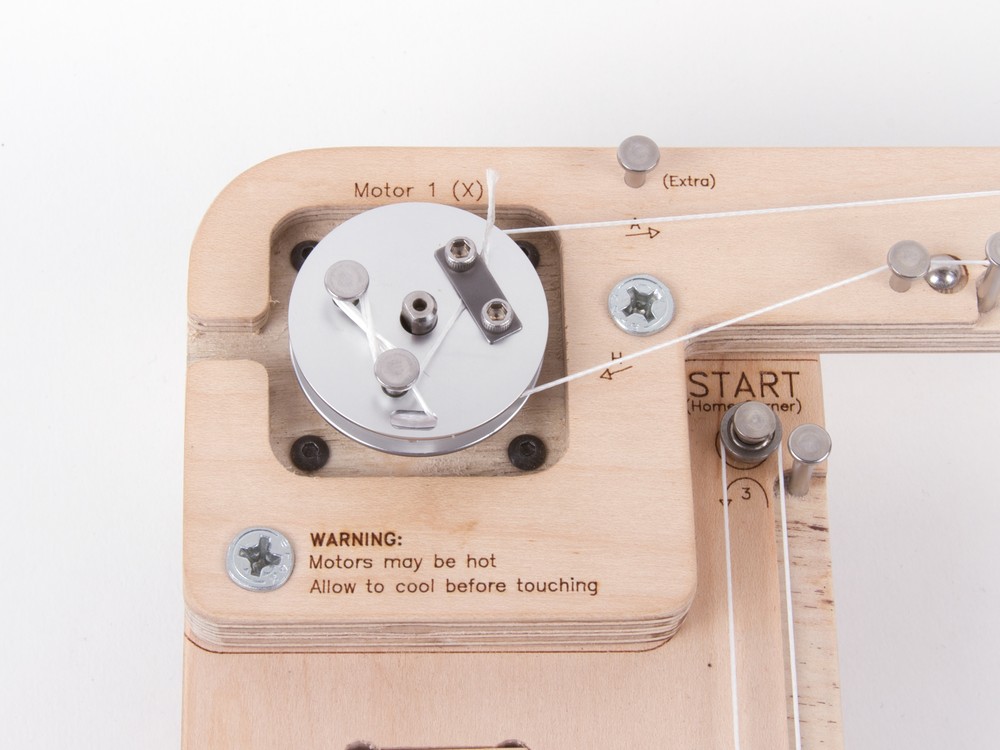 Inspired by the global hackerspace movement and (software) hack days, Kids Hack Day is a 1-day event held in various locations around the world, where children and adults come together to “hack” and make new uses of every day items.

This incredibly charming video from the Kids Hack Day kickoff event in Moscow on May 25 shows you what it’s all about. (And, we are tickled to see our own WaterColorBot and EggBot making little appearances as well.) 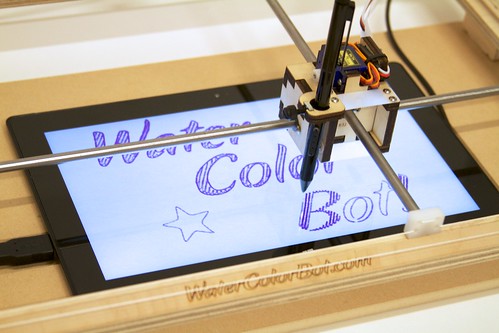 About a year ago, I started working on a project that used robotics to control a Surface Pro tablet. Not long after I started, I got my first glimpse at the the WaterColorBot on display at Maker Faire Bay Area 2013. The WaterColorBot is designed to carry a paintbrush over a piece of paper, raising and lowering it as needed to paint a picture. The movement and software control is similar to CNC router with special design modifications to make it lighter, cheaper and easier to control. A CNC router has to move heavyweight cutting bit with friction so needs expensive motors, rails, and belts. The WaterColorBot, on the other hand, needs only to move a paintbrush in a low friction environment.

I was instantly sold on the idea of using a WaterColorBot to control the Surface. I backed the Kickstarter, waited for my bot to arrive, and started working on software. When the WaterColorBot arrived, I was not disappointed. The assembly was quick and I was robotically painting in no time.

With the big mechanical and electronic solutions solved, my attention turned to the tablet. The Surface Pro is rare among tablets in that it uses a digitizer that allows extremely precise tracking with a stylus along with “hover” and “right-click” functionality. It does not need to be electrically grounded like a stylus for a screen that only supports capacitive touch. I was certain that the Surface Pro was the way to go, but not quite how it was going to be held together. The project was about to take a another serendipitous turn.

At this point, I shared my enthusiasm with Windell and Lenore of Evil Mad Scientist and they gave me a unique offer: Stop by the Evil Mad Scientist shop and together we would make a custom cut spoilboard (lower deck) fitted to mount the Surface Pro 2. Wielding digital calipers and other measurement and software tools, Windell came up with a design that held the tablet firmly and had extra space cut out for the charger, power button, and USB cable. 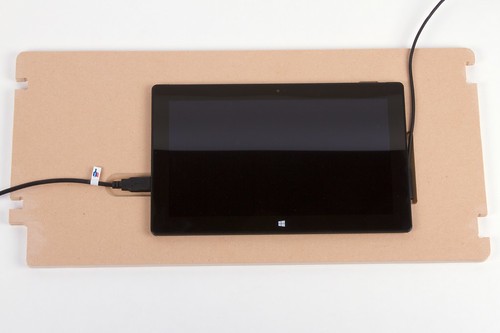 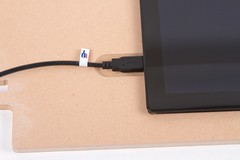 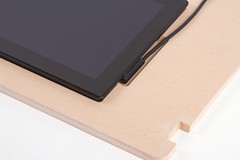 The area beneath the tablet has a lip and a lower recessed area. This design reduces wobble and makes it look even better. On the topic of machining – I got a few lessons in how larger CNC machines work. Windell showed me some design considerations in software and gave me a safety briefing about the CNC router itself. This thing can cut fast.

After a little sanding, we fitted the tablet, spoilboard, and WaterColorBot together. Having the co-creators of the WaterColorBot with me on this journey was priceless, as we can see from the final assembly. The first spoilboard we cut matched perfectly and the tablet is held firmly in place. 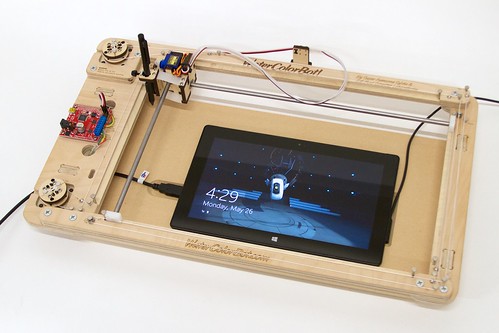 With enthusiasm fueled by seeing it all fit together, we decided to tell the WaterColorBot to do some painting. Windell loaded up an example sketch in Inkscape and, with only a minute to calibrate the stylus height, we were drawing!

The software running on the Surface Pro is called FreshPaint and we chose a simple marker tool. In the video, you’ll hear a laughter break where the Surface picked up the floating toolbar in the app and dragged it around the screen.

Given a little time, we could have taught the WaterColorBot to change brushes and colors in FreshPaint, but our goals for the day were met. The light weight and low friction of the Surface stylus is perfectly matched for use on the WaterColorBot. A custom fitted spoilboard means the Surface will always be at the exact same place on the X/Y plane, greatly simplifying future software development. Next project: Teaching the robot how to see! 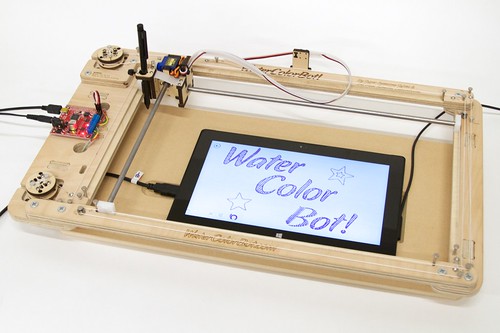 (Full disclosure: My day job is Systems Operations with Yammer, a Microsoft company. This project and use of the Surface Pro 2 is not affiliated with Microsoft in any way nor did they influence the project with sponsorship or exercise any editorial control. If they had, I’d try to talk them into contributing a Surface Pro 3! “Surface” is a trademark of Microsoft Corporation.) 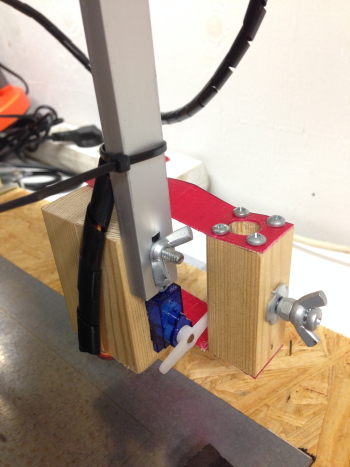 Jens added a new tool option to his DIY Laser: a pen holder.

Due to safety concerns I couldn’t run the laser out in public, but to be able to show of the CNC capabilities I built a penholder.

The pen holder design was inspired by the WaterColorBot’s brush holder, with its parallel flexure hinges. 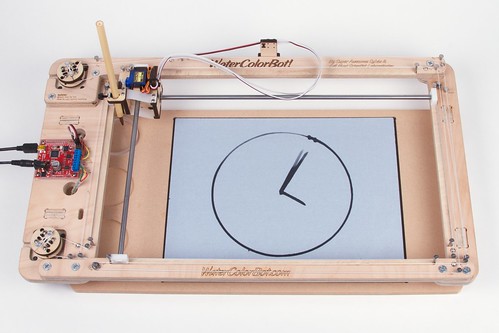 We built a evaporating-hand water clock using a WaterColorBot fitted with a Buddha Board. The Buddha Board is a black board with a gray ceramic coating that becomes transparent when wet, so you can paint on it with plain water to make black marks that disappear as the water evaporates.  (And, it fits nicely in a WaterColorBot with the appropriate jig.) 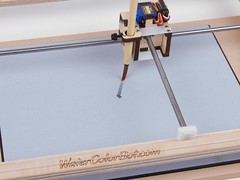 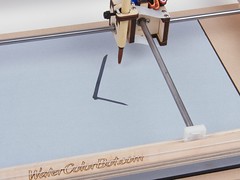 As a clock, once a minute it draws the minute hand, then the hour hand, and finally the outline of the clock face. 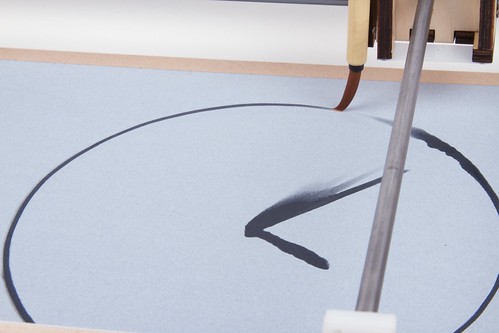 As the water evaporates over the course of a few minutes, the old minute hands fade away. It’s a neat effect.

And of course, video: