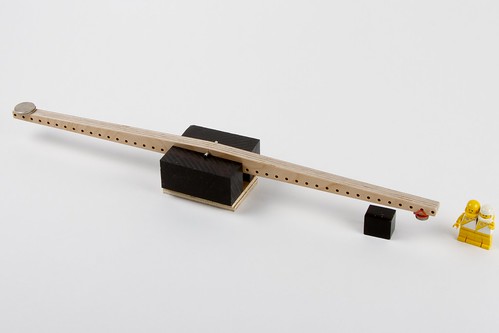 Our friends stopped by with a simple apparatus to demonstrate the diamagnetic properties of bismuth metal. Diamagnetism is a extremely weak magnetic effect — generally orders of magnitude weaker than everyday permanent magnets, which exhibit ferromagnetism. However it is also an extremely interesting effect because diamagnetic materials are repelled by magnetic fields. This is different than the case with ferromagnets, where one pole of a magnet repels another — rather, the entire material is (weakly) repelled by any magnetic pole.

Now, how might one observe such a weak effect? One way is to build a magnetic levitation rig, but the field configurations there are a little less obvious. With a simple but sensitive balance, we can see the repulsion directly. The balance above has a long wooden beam, a central pivot on two blocks of plastic, and a couple of coins on the far end for counterbalance. 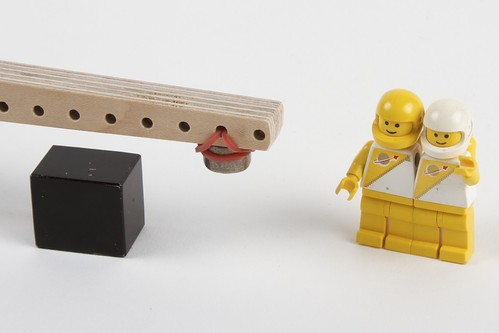 At the business end of the scale, there is a cylinder of bismuth metal about 1 cm in diameter, held in place by a rubber band. We also have a larger rectangular block, which is our test magnet, made of grade N50 NdFeB and painted black. And finally, the Lego Astronaut Twins are here helping out as a scale and position reference.

Moving the block magnet beneath the bismuth, we can see what happens in an animated GIF:

After the balance settles, the resting position of the end with the bismuth is considerably higher. With some calibration in terms of weights and/or positions, one could even measure the exerted force with some precision.

A slight improvement to this apparatus would be to reverse the roles of the bismuth and the block magnet. That is, to affix the magnet to the arm of the balance, and to slide the bismuth beneath it instead. You could then use a nearby block of aluminum to damp the motion of the beam through magnetic (eddy current) damping. Many commercial balance-beam type scales already use magnetic damping so that they settle down to their final values faster.