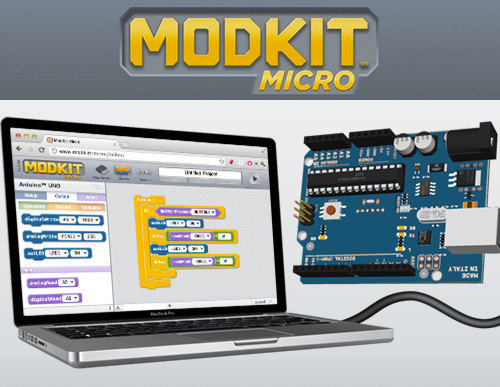 Our friends at Modkit are running a new Kickstarter campaign for their excellent Modkit Micro software.

[… ] Microcontrollers are no longer just for engineers — anyone can now pick up an Arduino board at their local Radioshack! Now that microcontrollers are even easier to find and buy, they should be just as easy to interact with and program. Modkit Micro works to make microcontrollers accessible to anyone, regardless of their particular background or skill set.

Modkit Micro is a graphical programming environment for microcontrollers that supports a growing number of popular microcontroller platforms including Arduino and Wiring boards. It makes it easy for almost anyone (perhaps especially those with no programming background) to get started using microcontrollers, just by dragging and dropping blocks on their screen to write the firmware.

That part is already pretty neat, but what’s really great about Modkit is that it isn’t trying to be a substitute for “real” programming in source code. When you’re ready to go deeper, Modkit allows you to go “under the hood” to directly view and edit the code that it generated for you. If you’d like early access to try out Modkit, we’d encourage you to support their project— they’re opening up the next round of access to supporters this month.

This entry was posted in EMSL Projects, Software and tagged Arduino, modkit micro. Bookmark the Permalink.