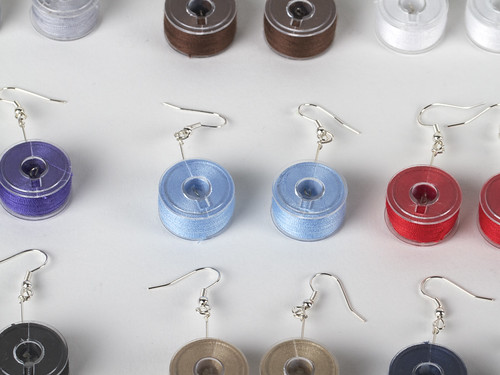 If you play with sewing machines and like to hang things from holes in your ears, have we got the project for you!  These easy-to-make bobbin earrings are very inexpensive, take only a few minutes each, and can be made in practically any color.

END_OF_DOCUMENT_TOKEN_TO_BE_REPLACED

This entry was posted in EMSL Projects and tagged sewing. Bookmark the Permalink. 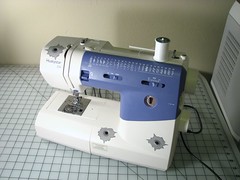 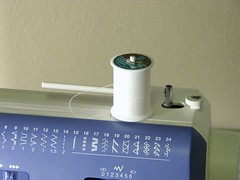 One of the common features on small “straight-stitch” sewing machines is a little rod on the top, called a spool pin. The spool pin holds a spool of thread and allows it to turn freely and feed out thread while the machine operates.

Seems straightforward enough, right? But what if you want to start working with larger spools of thread? Here’s an example that we brought home recently that, on first blush, just doesn’t look like it will work: 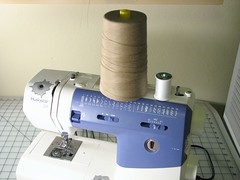 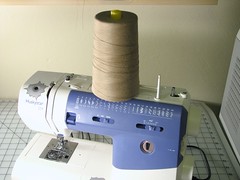 By comparison, the standard spool of thread looks puny, and the spool pin looks even punier. Even if this large spool were able to fit onto our tiny spool pin, it could not spin freely because of its weight and friction.

So how can we use the spool? Our solution was to design a larger, heavy-duty “spool spinner,” incorporating low-friction precision ball bearings. Total budget: $0.00– using stuff from the junk bin only– and under five minutes.

Parts used: an old “box” or “muffin” fan (the older and heavier the better), some rubber feet, a little piece of copper pipe, and superglue. 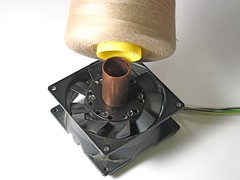 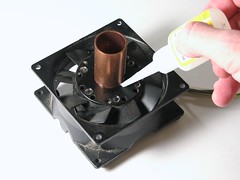 The fan that we found is an old 120 V AC type, made of cast aluminum and very sturdy. It doesn’t matter if it is electrically good; all that matters is that it spins well. To the spinning part of the fan we added a short copper pipe as our center pin, which turned out to be about the right size for the center of this particular spool. We used superglue to hold the copper piece in place. (Note: waiting for the glue to cure is the slow part of this build.) 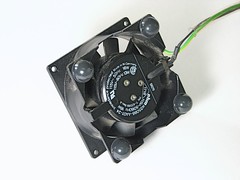 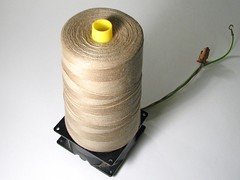 Add rubber feet to the other side of the fan and it’s ready to go.

Rather than keeping ours on top of the sewing machine we put it on the printer next to the sewing table, where it is less likely to get knocked over. (Side note: The cat enjoyed this setup.) 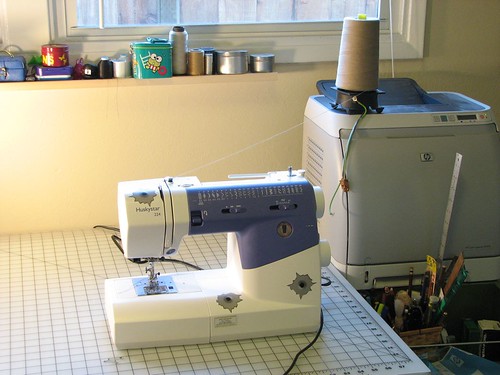 In practice, the fan bearing turns freely enough that the sewing machine can spin the spool as needed, but not so freely that it starts to turn and then unwinds the whole spool, so it works quite well.

Obviously this is a quick hack and is not the only approach to the problem– there’s nothing so fancy as a ball-bearing spool spinner on an industrial sewing machine, even though it can use huge spools. Instead, the spool is held in place while the thread is pulled off axially through a well-defined aperture. (Spools like this one, as you can tell from the slight conical taper, are actually designed to be used that way.) An advantage of our “spinner” design is that it works equally well with many different kinds of spools. It could even be a useful tool when winding coils from spools of wire.

This entry was posted in EMSL Projects and tagged diy, sewing. Bookmark the Permalink. 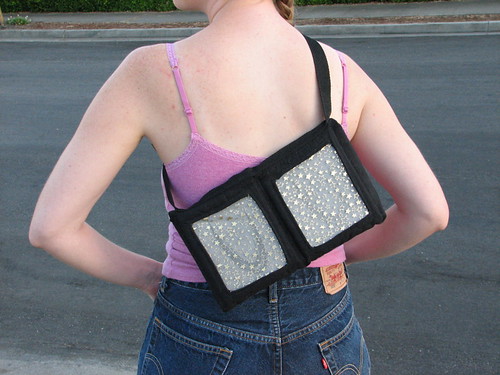 Much of the sewing I do is sort of off-the-cuff (pun intended.) This music satchel is a perfect example of sewing to fit the situation: It’s a set of speakers that you can wear while you’re riding your bike.

There are many reasons to take your music with you. The usual solution requires headphones. But sometimes you need to bring your party– and your speakers– along with you. We used to pull a giant stereo trailer along with us on social bike rides, and some of our friends still do (movie). But when it’s just you and a couple of buddies, and there’s ice on the ground, you don’t want to be towing 50 lbs of stereo around behind a bicycle. Granted, the speakers I used are nigh unto worthless and the amp eats batteries like candy, but they made just enough sound for our little group. I needed a small padded bag for them, though, so I made one.
END_OF_DOCUMENT_TOKEN_TO_BE_REPLACED

This entry was posted in EMSL Projects and tagged fashion, music, sewing. Bookmark the Permalink. 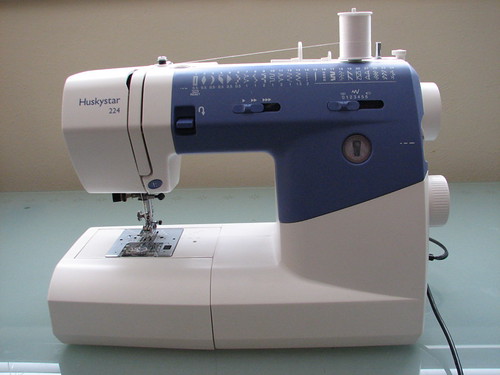 Craft is currently asking for sewing machine pictures. I can’t compete with the lovely vintage Singers, but here is mine. I have had it for several years and I even made my wedding dress on it. It is a Huskystar, which is a descendent of the Viking brand. I went with the top of the mechanical line on sale at the end of the model year. (Did you know sewing machines have a model year?) I didn’t see a need for computer control since I wasn’t planning to do embroidery. This was a good choice and I have no regrets. My favorite feature is the automatic needle threader, with the automatic buttonhole coming in a close second.
END_OF_DOCUMENT_TOKEN_TO_BE_REPLACED

This entry was posted in Everything Else and tagged sewing. Bookmark the Permalink.