We’re big fans of the Utah Teapot, and when a Walking Teapot arrived from our friend John, we immediately set it going inside our teapot. 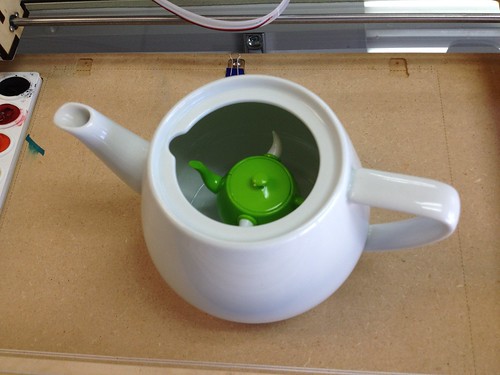 For a history of the Walking Teapot, see this video with its creator from its 10th anniversary last year.

This entry was posted in Everything Else and tagged toys. Bookmark the Permalink. 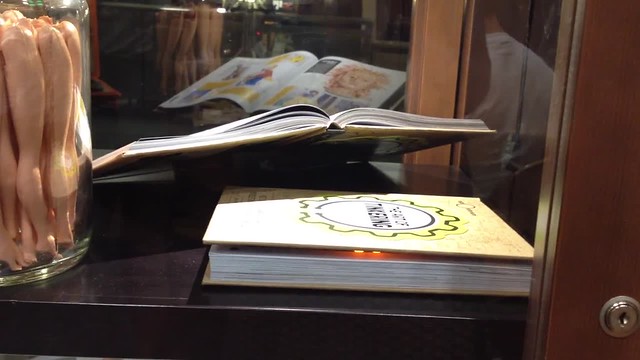 The Peek-O-Book is a close relative of the Snap-O-Lantern. The book occasionally opens and peeks out with its LED eyes before snapping shut again to look like a normal book on a shelf. 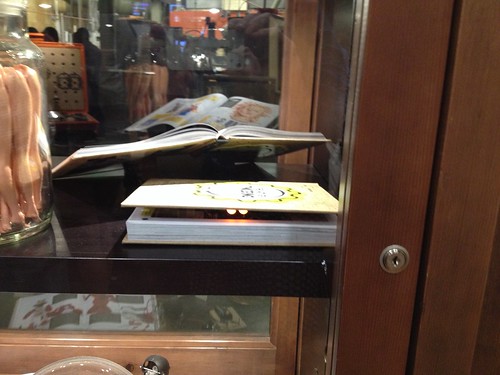 A compartment is cut into the pages of the book and the circuitry is hidden inside. 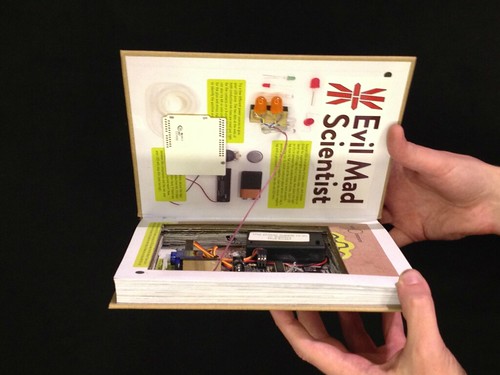 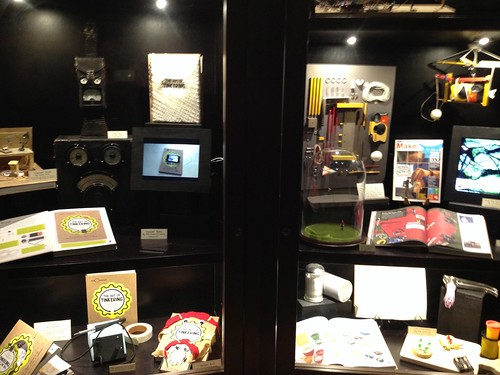 We made the Peek-O-Book for The Art of Tinkering book release party at the Exploratorium Afterdark event last week. Many of the tinkerers featured in the book were invited to hack a copy of the book. The cabinets in the Tinkering studio were packed full of hacked books and projects from the book. You can see pictures of some of the other hacked books in our photo set.

Some of our friends went to the NY Toy Fair (check out Make’s coverage— it looks like it was a lot of fun!) and came across a new offering from Klutz: “Invasion of the Bristlebots.” We were never contacted by Klutz (or Scholastic), which we find surprising, being that we are the instigators of the current brush-based vibrobot movement, and the coiners of the term bristlebot. Here’s our original story from 2007: Bristlebot: A tiny directional vibrobot. And here’s a round-up of some of the amazing reaction from the DIY community to this news from the toy fair:

Thanks to all of you for your support! We’re still figuring out how to react to this, and we’re waiting for comment from Klutz and Scholastic. We’ll try to update this post as additional stories and information arise.


Update: I’ve been adding news links above, and here’s the official statement from Klutz:

Update 2 (Feb. 20, 12:53pm PST): I just got off of a good phone conversation with Klutz and we’re exploring how we can get acknowledgment for Evil Mad Scientist Laboratories.


Update 3 (Feb. 20, 4:45pm PST): Pat Murphy of Klutz will be sending out a note shortly to let everyone know that Evil Mad Scientist Laboratories will be receiving acknowledgment in the next printing of Invasion of the BristleBots as well as on the Klutz website. This is good news for us, and it seems like Klutz is really learning from this experience about how to work with the maker community. The online response to this situation has been overwhelming and I am glad that such an incredibly vibrant discussion was able to take place. I am truly impressed by and grateful for the support we have received.

This entry was posted in EMSL Projects and tagged bristlebots, toys. Bookmark the Permalink. 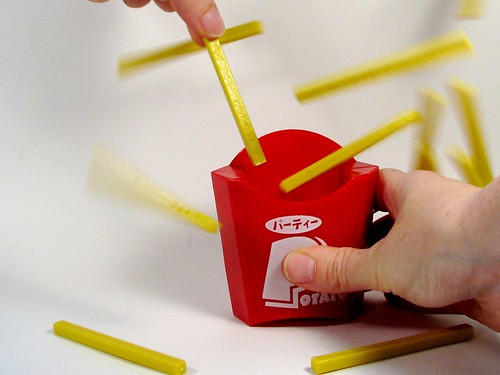 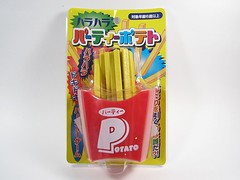 We stopped by Japantown in San Francisco the other day and picked up an absolutely hilarious toy in the Japanese dollar store. Drawing straws meets the game Perfection in the “Party Potato”. Each person pulls a french fry out of the container. When the right french fry is pulled out, the spring is released and the french fries fly. 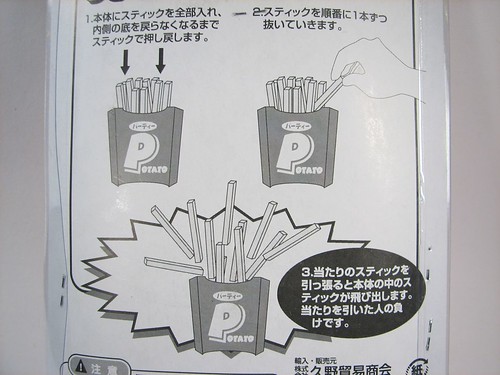 You don’t have to be able to read Japanese to understand these fabulous instructions. Two of the french fries are attached to strings which trigger the spring. It is awesome to see the plastic fly!

This entry was posted in Reviews and tagged toys. Bookmark the Permalink.

I’ve always been a big fan of marble runs, starting with the Gravitram in Portland, Oregon (pictures), all the way up to the modern marvels like this one by Matthias Wandel. While I’ve been dreaming about making my own amazing machine, a toy company in the UK has gone ahead and made it easy. Take a look at this amazing line of Techno-Ball sets by Cheatwell Games– in sizes from a diminutive 173 pieces to the 920 piece monster pictured here– with two independent motorized marble-lifting chains. (I want the big set. Maybe two.)

It looks like these are easy to get in the UK, even from Amazon.co.uk, but it’s not obvious that they’re even for sale in the states.

So, I’d like to ask: does anyone know where I can order a set (or two)?

A reader left a comment about Steve Jackson’s Chaos Machine— a giant ball-run construction toy that he brings to conventions. It’s apparently so cool that it has its own fansite.

The Chaos Machine is made out of a number of Chaos Tower sets from chaostoy.com. The sets can be built in a number of configurations, like the six-foot-tall one pictured to the left. This looks like a really fabulous construction system– enough so to change my mind about which set to get! The tracks look a lot nicer than the ones in the techno-ball set, and it has all the features of “real” marble runs: trampolines and catchers, vortices, switches, accumulators, a series of tubes, and probably more that I can’t see in the photos.

So… can anyone beat that?

This entry was posted in Everything Else and tagged toys. Bookmark the Permalink. 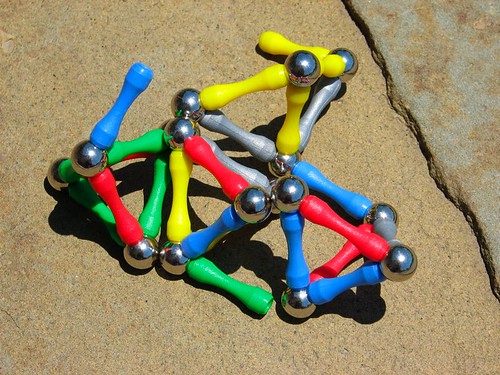 As Marty McFly says, “You don’t just walk into a store and buy plutonium.” Actually, all I was after was neodymium, but the principle still applies. I needed a pile of rare earth magnets in a hurry. Neodymium-iron-boron (NdFeB) magnets are cheap, extremely strong, and surprisingly ubiquitous. Despite this, most corner drugstores do not carry sets of rare-earth magnets, and it can be hard to get them unless you have a few days to wait for a package.

It turns out that you can get NdFeB magnets at the corner drugstore, and they’re cheap. You just have to extract them from the toys that they come in.
END_OF_DOCUMENT_TOKEN_TO_BE_REPLACED

This entry was posted in EMSL Projects and tagged magnets, toys. Bookmark the Permalink.