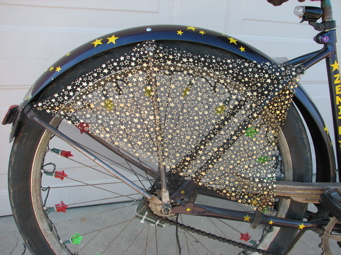 On a costumed bike ride, my red Princess Bride dress wrapped around my seat stay repeatedly and caught in my rear cog once. Not quite a total loss, since it looked post-fire-swamp with the holes and black streaks. However, it made me determined to fix the problem. You can see how I did it on instructables.

First I shopped around, but skirt guards are scarce in the US. I put the idea on the back burner since winter was approaching and my costumes were more adapted for warmth. Our bike ride got smaller and I had to come up with a smaller music system for the group. It’s just not practical to pull a heavily loaded trailer in the snow and ice for only half a dozen riders. I needed some gauze for the speaker pockets for the bag I was designing, and I found the perfect stuff on sale after Halloween. It matched Stella’s paint job so I got a couple of yards, not really knowing what else I would do with it. It wasn’t until the weather got warm again that I realized what it was for. A couple of minutes with scissors and cable ties and I was ready to ride in long flowing skirts again.

Typical skirt guards are made of laced strings or metal grilles. I’ve also seen plastic and vinyl skirt guards, especially on Dutch bikes. I have made cardboard guards for bike costumes, but they are necessarily temporary, not being weatherproof. Another material I have considered is coroplast, and just about any fabric would work, too. The tulle has the advantage of easily shedding dirt and allowing any lights on the wheel to show through. I was a little concerned about how well it would hold up, but I haven’t had to repair it at all. I’ve ridden it in all weather and it isn’t showing any wear other than sagging just a little on the edges. Tulle is available in just about any color, so you should be able to find just the right shade for your bike, too!

This entry was posted in EMSL Projects and tagged bikes, diy. Bookmark the Permalink.