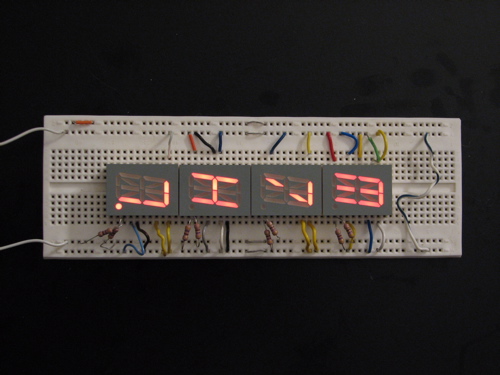 On this breadboard there are four Kingbright PSA08-11HWA sixteen segment displays that I got from BG Micro some years ago. The PSA08-11HWA comes in an eighteen pin (16 + decimal point + common anode) dual-inline package. Normally that’s great– ideal for use in a breadboard. Note that the rows of pins are oriented 90 degrees from how you’d like them to be– this is really only good if you want your displays to be read top-to-bottom in the breadboard, rather than left-to-right. Turn your head sideways to read this display saying “M7H7.” Controlling these displays is not difficult. However, in this case, where you don’t need to change what’s displayed, it’s absurdly easy.

The whole drive circuit is there on the board– It consists of four resistors (well, four pairs of two 470 ohm resistors in parallel) and a bunch of jumpers. Each display has a connection from 5 V, through the resistor (pair) to the anode, and then four to eight jumpers to ground for the segments that we want to light up. Total construction time: 10 minutes. Because of the way that the segments slant, we actually constructed it in a mirror view. We took photos (as you see here), and edited and flipped them in GIMP. We used the GIMP’s special “make evil” filter, because the version shown here is not only backwards, but also looks insufficiently evil. (After all, this is supposed to be an “evil” logo, right?) And, using some of the other nice tools in GIMP, the power leads didn’t make it to the final logo. =)

The BG Micro part number for the displays was LED1041, $0.39 each. They are apparently no longer carried.