Yes, it’s time for the state of the blog address. We took the EMSL blog online on June 21, 2006, three months ago. (It was about time that we started organizing our projects.)

So, happy quarter-birthday to us. Thus far we’ve put up some thirty projects. We’re actively working on about forty others right now.

If you haven’t bookmarked us, now is a fine time to do so. =)

Minor announcement I: We’ve just created a new group on flickr as a repository for our project photos. 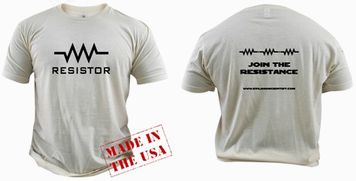 Minor announcement III: Today we’re adding a new section of links to our web page, “Honorary Mad Scientists,” a short, specific, non-exhaustive list of creative people, sites, and/or blogs that we admire. We thought about calling the list “people like us,” but (1) it’s cocky of us to think that we can be as cool as these people and (2) maybe these folks don’t want us to suggest that they are anything like us. So, we’ll just call them Honorary Mad Scientists; read on for a partial list.

This entry was posted in Site News and tagged fashion, resistors, t-shirts. Bookmark the Permalink.