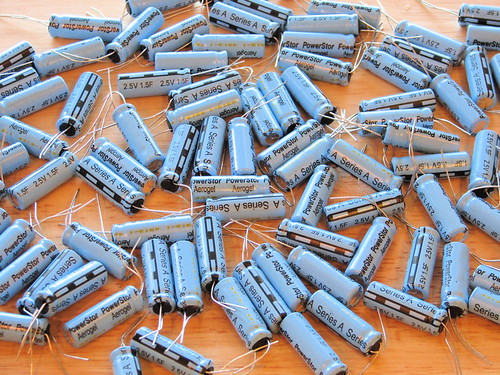 We had a lot of fantastic entries in our supercapacitor contest! We now have a Grand Prize winner, two Second Prize winners, and a number of honorable mentions. A big thank you to everyone that submitted entries!

A Luxeon V LED driven off of a LuxDrives 3021 buckpuck has been sporadically putting out a very short bright flash every 15-30 min on my desk startling coworkers. But it hasn’t been connected to power in over a month. The buckpuck has been harvesting power from 220 microfarad electrolytic capacitor which is in the circuit as a power line conditioner. Given a 1 farad supercap coupled with a very low (10000:1) duty cycle flasher circuit, a very distracting flasher could be made.

We selected this entry both for its originality, as well as for taking advantage of the low internal resistance of the supercaps.

Two second prize winners will get five caps each:

Chad Norman‘s entry is funny enough that it’s hard to read with a straight face:

Dress them up, adding little tiny bits of plasticine/playdough and dress them all up real purdy like. Then, using stop motion techniques, animate an epic saga of romance, death, intrigue and action with the supercapacitors as the actors.

Mod your wireless mouse. They’ll soak up a day’s worth of juice in seconds, and you can stop buying AA’s, or worse, nicads.

Read on for the (long) list of honorable mentions!

We had enough good entries that it wasn’t easy picking the winners. Here are some of our other favorites:
Honorable Mentions

While there were a ton of rail/coil gun suggestions, there were also some original and very creative ideas. We liked these two the best:

These would be perfect for a rail gun. It would be simple to design and build also.

For the barrel, us a thick cardboard tube, maybe 1/2″ in diameter. The projectile would be a metal ball or (better) a short (1″) metal rod that fits perfectly inside the tube.

Along the barrel, in series, are electromagnets. Each one with several hundred wraps of coated wire and a capacitor waiting to be discharged into it.

Each magnet could be triggered by small (and thin) leads which are poking through to the inside of the barrel before each magnet. When the projectile comes in contact with the leads, it connects them, completing the circuit, discharging the cap, and creating a magnetic pull on the projectile.

The triggers and magnetic areas will have to be spaced farther apart the further down the barrel you go, to compensate for the speed of the projectile. They have to be completely discharged by the time the projectile reaches it’s respective magnet, or it will slow down the projectile instead of speeding it up.

With ten of these in series you could make a 25 V, 0.15F, 600mOhm equivalent capacitor. I would use this for a portable multistage coilgun. With such a high capacitance, the voltage drop for the short time that each coil is “firing” would be farily low, and a multi stage gun is definatley feasable. To charge the caps, Power MOSFETS, or some other low resistance switching device could be used to changes the caps from a series connected configuration to a parallel configuration. A 9V battery could rapidly charge them, with a comparator turning off charging at peak voltage and switching the caps back to series connected for the next shot. With a custom clip this could be a fun little toy. For target shooting , or office combat (as long as care is taken to keep the projectiles from flying too fast), This could be a fun little toy that could be made fairly compact.

A number of ideas involved destroying stuff (including the capacitors) in creative ways:

Were you to string them up in series, charge all of them, you’d have quite the “ESD tester”. Hook it up to an LED and see what happens. Want to get back at that op-amp thats been giving you trouble?

Or you could just pop them into a wall outlet and have them explode spectacularly.

I would string them up like firecrackers and apply enough voltage to make them explode!

Subject: Supercapacitor Contest
Sure bike lights and christmas lights are nice and all but wouldn’t it be more fun with a portable Waveguide
EMP gun! What more evil fun could you have than to go around blasting annoying people’s electronic devices.

Solar powered water cannon!
You charge up however many caps you want using a solar cell. A microcontroller monitors the charge and every so often discharges into a container of salty water, to electrolyse it. The container is an upside down beaker in tray of water and the electrodes are in the water, under the beaker. After a while the solar cells charge up another cap and that gets discharged into the airspace of the beaker, which is now filled with hydrogen and oxygen. Hilarity ensues! If you use strong enough materials you could fire it more than once :)

Use them for rechargable flashlights using old servos or gear motors.

A dynamo powered flashlight comes into mind. Use a motor backwards, or a dynamo to charge a cap, and then use it to power a LED (should the led be white, a boost up converter would be needed, as the cap can only charge up to 2.5V).

You can very easily make some solar powered LED blinkers with those Super-caps that will absorb light during the day and blink for hours after dark thanks to those super caps.

You only need 3 items to make them a FLED,Solar cell and supercap and can be thrown together in as little as 5 min.

Heres a great tutorial on how to make them:
http://www.solarbug.com/tutorial3.html

They are pretty neat and super easy to make. With a bunch of caps like you have you could make a cool little display at night in your room of flashing LEDs that will last for years.

Other practical and clever ideas

Wire them all up to the nessacary voltage and place them in your trunk of your car so that if your battery dies you have a quick restart so you can at least get going.

I’ve wanted to build a solar powered video transmitter that will send a still every few hours. Since there is no electricity near where I want to place the camera I thought I would trickle charge a storage device and send a frame once in a while.

Those supercaps, a clamp, and a couple of carbon rods could be made into a very effective spot welder. Instead of worrying about having a power supply manly enough and adjustable enough to provide the surge current necessary, simply wire as many of the caps as needed in series/parallel to provide the desired weld energy. You can recharge them between welds with a low-power 6-12V supply.

Imagine never having to charge low power devices again. Simply build a crystal radio circuit, good, with nice components using modern RF design (no cardboard tube mess here). Then, instead of rectifying half of the signal, build a bridge rectifier (again, with nice components). Connect the supercap to the output of the bridge. Tune it to your favorite local high power AM station and voila! Free power! Well, it could be a very effective power source for things like car dongles, garage door openers, remotes and other low power gizmos that require batteries.

Turn your TV remote into a BEAM photovore bot, so it will
crawl out of those dark hiding places and into the light,
where you can find it! A couple of pager motors, voltage
triggers and opposed calculator solar cells — with the
proper transistor switching — and you have the mobile
remote bot…

Yea, I bet these would work to build a wind-up battery charger. A windup clock mechanism would be converted to power a micro-dynamo and charge one of these caps for an electric music box that plays AC/DC instead of all of that fairy, happy music stuff.

Several people had a number of good suggestions:

(We think that the stapler should shout “OUCH!” once every ten or so times that it’s used.)

And of course, there’s the far-out idea that may or may not work. Of that category, we liked this one the best:

By this point in your contest I’m sure you’ve already had suggestions for projects that typically run hand-in-hand with high-capacitive opportunities: homemade lasers, railguns, tasers, etc. All this is good and well, but as they tend to say in the electronics scene: it’s been done before.

The obvious step is to make a high farad capacitor bank out of the individual components, but is ~150F @ 2.5V really enough energy to do anything especially destrct… er impressive? You bet your sweet ass it is!

In my opinion the greatest use of the huge power discharges present in withing a large capacitor bank is the ability to change the inherent properties of materials. I’m talking about literally vaporizing solids or liquids and using the resultant compound for further purposes. Case in point? A mercury-plasma destructo-tron 4500.

Contruction simple requires two pipes with a minimal gap between them held apart by an insulating material at one end. One pipe connected to the business end of the capacitor bank and the opposite end (with necessary limiting and safety electronics) connected to the ground end. With a few drops of mercury placed in the gap and the entirety of the capacitor bank’s power discharged the mercury should be converted into a (deadly) plasma vapor but the discharge force at the opposite now business end of the device (the end without the insulator) should be tremendous. This can be harnessed to either expell a conventional device or otherwise harnessed to cause further… impressive feats.

I wish you the best of luck in whatever experiment you choose to persure, but above all please be safe and take all available security precautions.

This entry was posted in Electronics, EMSL Projects and tagged capacitors, contest, electronics. Bookmark the Permalink.

1 thought on “Supercapacitor Contest: We Have Winners!”