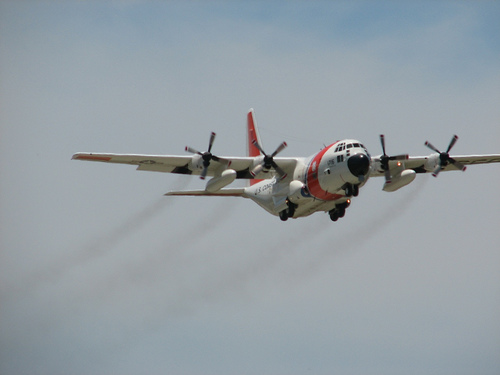 The lab staff went on an outing to the Watsonville Fly-in and Air Show in May. It was an enjoyable small-town event with lots of small planes. The biggest was a Coast Guard C-130 Hercules that took a break from guarding the coast for a couple of fly-bys and a touch-n-go. We got slightly sunburnt and took some fun pictures.

We spent a lot of time (especially during the monster truck performance) looking at the vintage and experimental aircraft. After a while, all those Cessnas and Pipers start to blur together, so I took pictures of what I thought set them apart – their paint jobs. And every good small plane has their paint job crystalized in their wheel pants, so that’s what I took pictures of. I think that tear drop shape is absolutely lovely.

There was a car show, and you can see that I adore chrome. Of all the planes, Christian’s favorite was the Army Cessna. Windell liked the push prop planes, and I liked all the shiny bits.

We are more than bored with the flying lawn mower act, but we did enjoy the formation flying by the Texans, Mustangs and their buddies. It was pretty impressive that this was the 42nd year, and that Eddie Andreini had performed for every one!? He was fun to watch in his Stearman. We picked up a flier for the model aircraft airshow at the Santa Clara Model Aircraft Skypark and we’re hoping to drop in to see their jets in the air.

This entry was posted in Field Trips and tagged planes. Bookmark the Permalink.