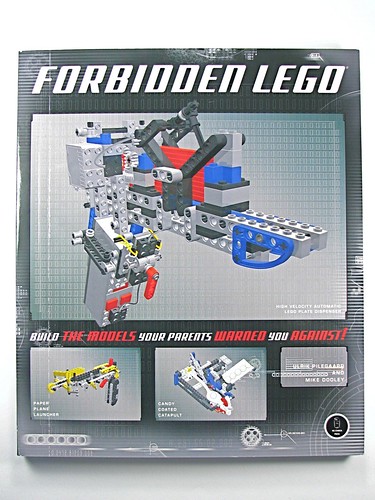 It was on the 12th of March this year that I first heard about, and placed my order for, Forbidden Lego, a new book by Ulrik Pilegaard and Mike Dooley, $24.95 from No Starch Press. It’s finally here, and yes, you want a copy.

Forbidden Lego was written by a pair of Lego master builders, who used to work in designing advanced Lego sets (e.g., Mindstorms). While they obviously got to work on lots of cool things while they were there, there were certain projects that just turned out not to be suitable to be made into kits released by the Lego company. They wrote the book to give some kind of a tantalizing hint at the kinds of things that go on behind the scenes at Lego, and the kinds of neat things that might get released in a world without product liability suits.

The book starts out with an short introduction that explains the authors’ motivation for writing the book, and an interesting discussion about the process of actually getting a model designed for production. You don’t normally think of bureaucracy when you see a Lego model, so it’s surprising in some ways.

I particularly liked their comparison of the instructions included with Lego kits to dishes at Taco Bell: In both cases, you want to make several different things with the same, small set of ingredients.

The Lego product safety standards are (of course) discussed in some detail, and more or less boil down to the question “could it poke an eye out?” (And poking eyes out is frowned upon.) There are also apparently other Lego design rules and guidelines– models might be considered unsuitable for production if they require cutting bricks, using non-Lego components, or so forth. But, creativity has its ways of oozing around rules, hence the book.

Forbidden Lego features five projects spelled out in the sort of excessive detail that you expect from a set of Lego instructions. In fact, it’s an interesting hybrid between a book for adults and a book for kids. While the introduction is clearly aimed straight at the adult users of Lego, the instructions are in classic Lego style: (nearly) wordless and including every step– even the ones that could be instead written out as “repeat for the other side.” On the third hand, these projects all involve cutting up Lego pieces, using non-lego objects in the design, and/or a good probability of poking an eye out. 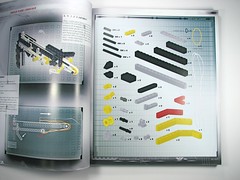 Gathering up the parts to build one of these projects is different from building any other Lego set: the bricks aren’t included. You are assumed to already have a healthy collection of bricks before you pick this book up. Good assumption, I’m guessing. 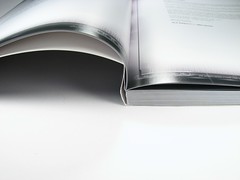 One of the things that I like about this book (aside from the title) is the level of care that went into the construction of the book itself– the binding is saddle-sewn with a soft cover that lies perfectly flat even when you’ve only gotten as far as the introduction. It’s great since you’ll need the book open to stay open while you’re digging for that one little connecting piece. Of course (1) it’s a book about constructing things and (2) it’s designed to be used, so it’s only natural. 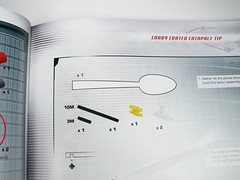 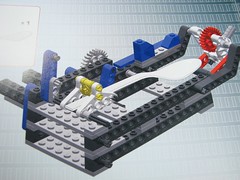 Here is where things start to get interesting. You flip through the instructions and find, among the other parts called for, a plastic spoon…. and that’s why that won’t be made into a kit. But, if you take a gander at what this looks like when it runs[YouTube], you’ll understand why it’s worth building anyway. (The video was released by the publisher– I haven’t built that model yet.)

To give the book and its instructions a real-world test, I built one of the models (within a few hours of getting the book), the “High Velocity Automatic Lego Plate Dispenser.” It’s on the cover, and I’m guessing that it’s going to be the part that sells the most books– and with good reason. It’s a pistol-shaped Lego gun that fires bricks– 1X8 flat smooth tiles to be specific. It can hold a clip of 14 bricks and fire them automatically, with a rate of about 3-4 per second. (Check out the promotional video here.)

If you happen to have all the parts to build this lying around, that’s great. I did not have enough technical parts to build this model exactly according to instructions– I had to improvise in several places, in particular completely redesigning the handgrip and trigger. Here is what mine looked like: 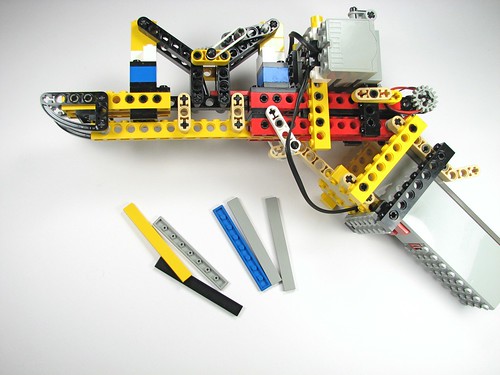 I am entirely grateful that improvisation was required. The extra difficulty of working without the right set of pieces makes the difference between blindly following a set of instructions (which I do not enjoy) and a real building challenge. Interestingly, the “important” parts of the core design are actually more common Lego pieces. I can’t really tell to what extent that’s intentional.

So how does it work? Pretty damn well! I get a range of about 6-10 feet, and I only wish that I had more 1X8 ammo. (I only have six tiles.) I made a short video of it; take a look (embedded here) or directly on YouTube.

I do have a few criticisms to offer of the book, none of which is close to fatal. In building the design, I found that the computer renderings were often dark and hard to read. That’s largely due to choosing dark colors of bricks for the builds; a choice that could have been avoided. I also think that I might have preferred to have seen more models than five, with a few steps skipped here and there to keep the length down. Obviously, this is not a book for beginners– so maybe *not* showing the obvious details, or putting more steps per page would be acceptable. Finally, I was a little puzzled because some of the pieces listed on the parts page were ones that I had not seen before and were not labeled. That’s just fine if you’re opening a kit and just need to make sure that it’s there– but with the book, it makes less sense if you have never seen that particular component before…. so a few more labels and descriptions would be nice.

The instructions themselves are of course the real point of the book. They are very good, unusual, and are sprinkled with little clever tricks. (Where else is it written down how to make automatic weapons out of Lego?) I’m happy to have my copy of Forbidden Lego, and I think that it belongs on the shelf of most serious, grownup Lego fans. For the youngsters, be sure to read the warning labels (“Adult supervision required.”)– we do still live in a world with product liability suits, and I wouldn’t want to see this book pulled from the shelves.

This entry was posted in EMSL Projects, Reviews and tagged lego. Bookmark the Permalink.