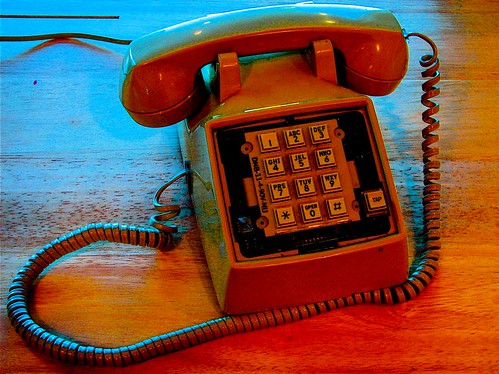 Last week I was lucky enough to be able to go to MacWorld and worship at the altar of the iPhone, as so many others have done. That is one heck of a nice looking device, and I really wanted to own one right up until I found out about the soul-crushing “service” contract that comes chained to it. And that’s one of the reasons that I want to remind you that it’s important– no it’s your fundamental duty— to be as ruthless and cruel to The Phone Company as they are to us.

I saw an interesting article this month in an engineering magazine called EDN. (Isn’t it interesting how engineering magazines have exactly the sort of names that you would expect engineers to come up with?) It’s about how to (legally) steal power from The Phone Company. Not that you can steal enough power to run your microwave oven (or even an LED, continuously), but it’s the principle that counts, right?

Telephone lines provide 48 V with some decent current, intended for such purposes as driving a solenoid to ring the (physical) bell of an old telephone, like mine above. By law, a device that isn’t actually communicating must present a resistance of at least 5 megaohms to that line, which means that you can only get out 48/5e6 = 10 microamps of current. The article shows how you could use this tiny trickle current to charge a supercapacitor (slowly) up to 2.5V, and then use that charged supercapitor to use an ultraefficient switching power supply to do… well… something. Like flash an LED once in a while.

Of course, this idea has been around for a while; some details about this source of power are even discussed in The Art of Electronics. But who is actually doing anything about it? I’m working on some other projects right now, so it’s not clear that I’ll be building something like this any time soon, but I hope someone is. It’s time that we all worked a little harder at gettin’ our due from TPC.

This entry was posted in Everything Else. Bookmark the Permalink.

5 thoughts on “Gettin’ your due from TPC”