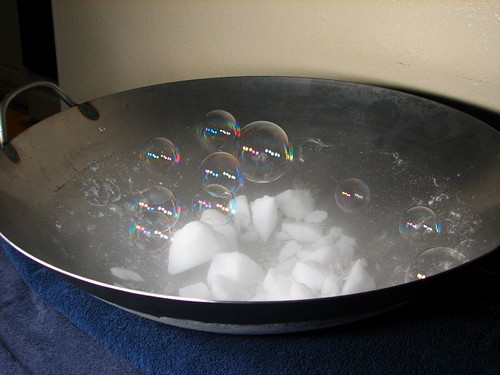 Today on Neatorama and Boing Boing, we saw a great demonstration video of a light aluminum foil boat floating on a layer of exotic heavy gas– sulfur hexafluoride.

You can actually do a version of this trick at home, using stuff that you either already have or can get a the grocery store: You can blow bubbles and float them– apparently in mid air– atop a layer of carbon dioxide; a not-very-exotic heavy gas. You’ll need a big pot, pan or storage bin (made of plastic or metal), some dry ice, and bubbles.

How do you do it? Place your dry ice in the pan and wait a few minutes for a layer of carbon dioxide to form in the bottom of the pan. (We used a 20″ diameter steel wok, which turns out to have a pretty good shape for the job.) Very, very gently, blow some bubbles above the pan and let them fall in. If your carbon dioxide layer is thick enough, the bubbles will bounce off of it, or often even come to rest, sitting in place.

We made a video so that you can get the idea, but you should really just try it yourself because it’s pretty straightforward and the pictures don’t do it justice.

The first time that we saw this trick was at the exhibit pictured bellow at the Exploratorium. What’s really cool about their display is that it has a tall plastic cylinder so that you can really see the bubbles floating in “mid air.” We’ve written about a lot of cool things that we’ve seen at the exploratorium, like the fountain earlier this week, but this is the first project that we’ve done based on an exhibit there. 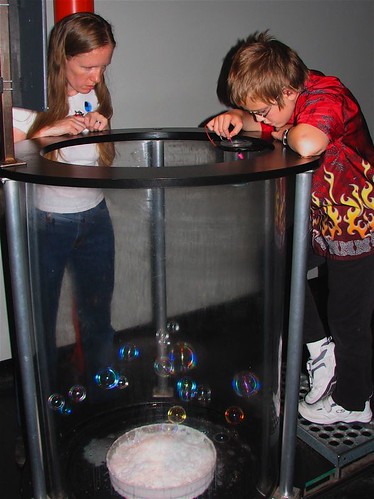 One word of caution: Dry ice is really cold. (There have been times in my life where I have had occasion to consider temperatures like one microkelvin “hot,” but this is not one of those times.) Don’t eat it, and don’t touch it with your bare hands– use someone else’s. ;)

Further (future) reading: A few of our dry ice projects– and dry ice recipes– are featured in an article that we’ve written in The Hungry Scientist Cookbook, forthcoming from ReganBooks at HarperCollins in September, 2007. Until then, you can hang out with the Hungry Scientists in their group on instructables.

This entry was posted in EMSL Projects, Science and tagged dry ice. Bookmark the Permalink.

7 thoughts on “Floating bubbles on CO2”