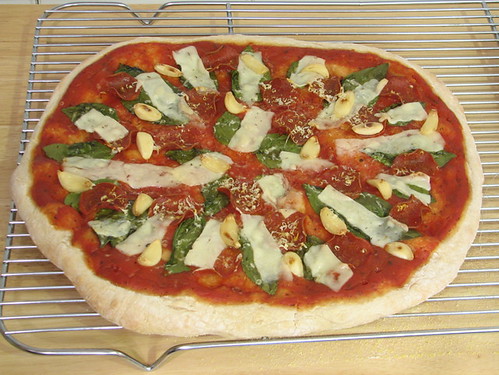 No knead bread is an amazingly easy recipe that allows anyone to make rustic bread at home by just stirring some stuff together and letting it sit for a while before baking in a pot.

We’ve read about it from Megan at Not Martha, who has made it so much that she’s had to post updates, and McAuliflower at Brownie Points, who has even put chocolate in hers. We’ve been having fun making, modifying, and eating our own versions. Here is our contribution to this meme: low knead pizza. 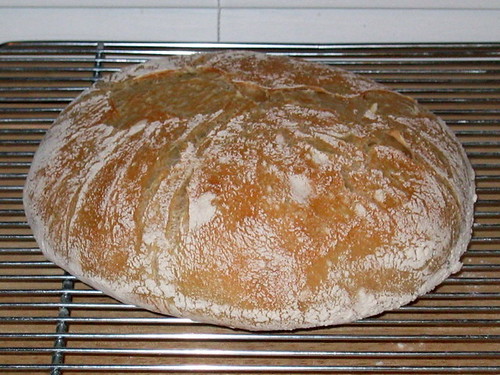 When we finally tried out the no knead bread, it turned out very nicely. Not having a dutch oven, we put it into an 8 quart stock pot, which worked out just fine. And December’s Cook’s Illustratedlegitimized this substitution when they listed a stock pot as their favorite dutch oven. The recipe was so easy, and so forgiving, we thought it ought to be able to do more. 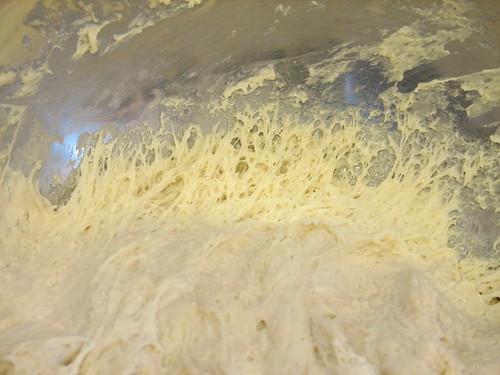 We figured that any dough that is this stretchy ought to make good pizza dough. However, it was on the sticky side and not really manageable for rolling out. So we made the dough with a little extra flour. That meant it had to be worked a little bit more to come together, hence “low knead.” One other modification we made was to use milk instead of water, which improved the flavor of the crust. After the second rise we divided the dough, rolled it out and topped it with turkey pepperoni and some nice provolone. We baked it at about 450 for about 15 minutes on an aluminum pizza pan. The pepperoni was perfectly almost burnt, just the way we like it, and the crust was tender and very flavorful.

The only problem was that there wasn’t enough; doubling the quantity solved that problem, and we’ve finally settled on the following recipe.

Whisk dry ingredients together, then pour in milk. Here’s the low knead part: mix together and then fold over once or twice (yes, it is very sticky) until it combines to form a nice lump. Cover with plastic wrap (if it is not clingy enough, weight down with a dish towel) and allow to rise about 24 hours. Scrape the dough out onto a lightly floured board and fold dough onto itself a few times. Cover again and allow to rise for 1-2 hours. Divide dough in two on a lightly floured board and roll, press, pull and/or toss into disks. Put a generous layer of cornmeal or flour on your pizza pan or peel before transferring the dough. Top as desired and bake at 450 for 15 to 20 minutes, or until the crust has browned nicely.

One topping suggestion is basil, pepperoni, roasted garlic and provolone picante (shown at the top of the page). Here are some others to try: 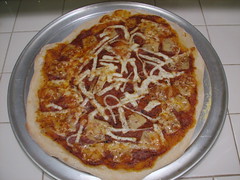 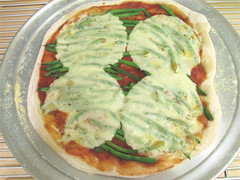 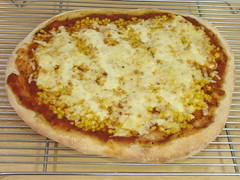 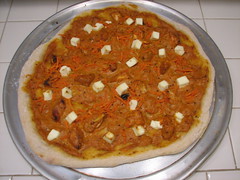 Here’s the NY Times (login probably required) recipe that started all the fuss. The fabulous thing about this recipe is that it has people realizing that you don’t have to be afraid of yeast dough. If you haven’t already, give it a try. And then maybe make some pizza.

This entry was posted in Play with your food and tagged food. Bookmark the Permalink.