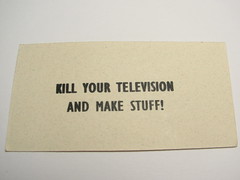 Maker Faire was a smashing success. The big message of the fair was summarized succinctly and stamped on the back of a card we were given: “Kill Your Television and Make Stuff!”

We had a great time in our little prototyping world off in the corner of the Expo hall by SRL. Near us Bathsheba Grossman had her beautiful sculptures, Fab@Home was printing with cheese and frosting, John Guy had his 3D CNC gantry next to his margarita machine, and Lee Krasnow had an entire workshop for his precision puzzle making. We were also by a couple of exhibitors (as opposed to makers): Epilog and Protopulsion, but I have to say, it seemed like the makers all got a lot more traffic than the corporate folks with their tradeshow-style setups. We were all off behind the Tesla coils, which stole our visitors’ attention hourly. Nobody could compete with the Tesla coils when they were running!

We can’t possibly list all of the cool things we saw, and we didn’t see half of the stuff there, but read on for some of the highlights for us.

Absolutely the best part of the fair for us was talking to all the makers. In addition to spending time at the maker benches near us, we occasionally made forays out into the rest of the fairgrounds and connected with all sorts of folks. Bruce Shapiro of the Art of Motion Control is a totally cool guy and his wife is awesome. His art was very fun and it was great to see them getting people to draw on lightbulbs via the computer. Bill Gurstelle was fun to talk to – everyone loves catapults, right? We got to see I-Wei of Crabfu Steamworksrun his steam walker (last year he was in a building where he couldn’t fire up the boiler). 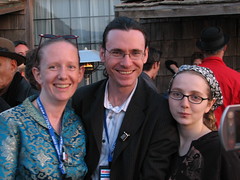 We talked with Limor of Adafruit Industries about kits, parts sourcing, and all kinds of other stuff. Hanging out with Jeffrey & Jillian of Because We Can in the TechShop and ShopBot hall and watching everyone play with the interactive tables was immensely rewarding. We traded robot generated art with Phil and Bre at the Make: table. We got to show off our TV-B-Gone case mod to Mitch, the TV-B-Gone inventor. We lusted after the awesome jewelry made by Raven of Made With Molecules. And it was way fun chatting with Mr. Jalopy.One of the most interesting makers we met was the one who gave us the “Kill your television…” card above. Ernie Fosselius was there with his amazing Crankabout Mechanical Theater which contained (among the wonderful carved automata) the Totally Unnecessary, Overly Redundant & Mechanically Superfluous Light Switch Complicator. It wasn’t until after the fair that we realized he is the genius creator of the brilliant short Hardware Wars and was a member of The Mystic Knights of the Oingo Boingo. Our hero! Interestingly, Phil Torrone had mentioned to us that one of the common themes among the makers at the fair was a general disdain for television, and Ernie cemented that observation with the stamp on his lovely card.

All of these incredible people treated us like we were the cool kids, too! One of the social revelations of the Maker Faire is that the geeks are now the cool kids. Most of us grew up being labeled outcasts and freaks, but we’ve found our way to this community where we all respect each other for actually trying out the crazy things we think up.

Our days at the fair were so full that spending a couple of minutes sitting in the peaceful Neverwas Haul with a cool breeze blowing was an unspeakable luxury. The balcony was great for watching the rocket launches, too. 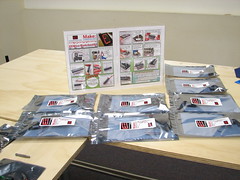 Some other cool things we did:

We were so busy we didn’t get many pictures taken. We have a set here, but you should check out some of the 17,000+ photos on flickr from this year’s fair. And break out your 3D glasses and check out this amazing set. This guy’s dual camera set up was lustworthy. There’s even a picture of our table and several of our sugar sculptures!

Thanks to our readers who stopped by to say hi – it was great to meet you all! We can’t get enough of the community fostered by the fair, and we are eagerly anticipating the next one.