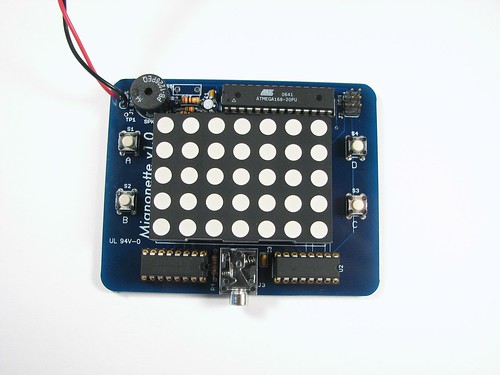 The Mignonette is a minimalist handheld gaming platform that we helped to design in a collaboration with Rolf van Widenfelt and Mitch Altman.

The Mignonette is based on an AVR microcontroller (either the ATmega88 or ATmega168) hooked up to drive a 5×7 bicolor red/green LED matrix display, for a grand total of 70 bits of gaming goodness under your total control.

The Mignonette is designed to be easy to assemble, and uses a rather minimal set of components– the AVR microcontroller, the LED display, and a pair of ULN2003A transistor driver chips for the LEDs. Besides these core components there are also four gameplay buttons, a 6-pin ISP connector for using your AVR programmer, a 2xAA battery holder, and a simple speaker. The schematic and bill of materials are available at the Mignonette project download page.

To keep things cheap, you can get this surplus LED display from BG Micro, however it is also sometimes possible to find pin-compatible but much brighter displays, like the black-surfaced one in our pictures here. While the hardware only “knows” about red and green, the refresh rate of the display can be high enough that it’s straightforward to do full grayscale on both the red and green, as well as to produce a full range of orange and yellow colors. 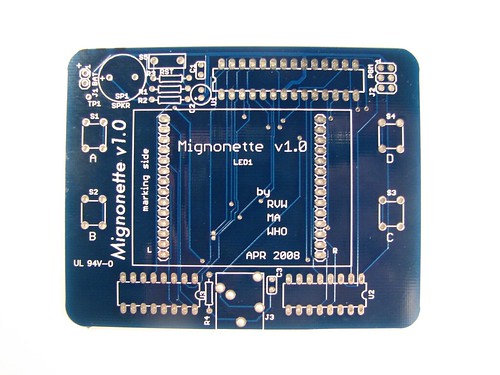 This is what the official Mignonette 1.0 circuit board looks like.

One approach to building this is to start with a kit (a few are available– and you can build one at Maker Faire!) but we would also encourage you to just dive right in and build your own from scratch. Again, this design has a minimal component set and lends itself very well to being duplicated without the printed circuit board. Armed with the schematic and the data sheet for the LED display (available on the BG Micro Datasheet page— look for LED1145), you can also build up this project on a piece of perfboard or possibly even on a solderless breadboard. In fact, our first prototype of the Mignonette was built in about two hours by dangling the buttons and LED display off of one of our business card development boards.

Once you’ve built up the hardware, you can use an AVR programmer to program one of the existing demo games or to write your own from scratch. You’d be surprised how much fun gameplay can fit into just a few pixels, and this is a great way to get started– where every pixel counts.

Attack of the Cherry Tomatoes 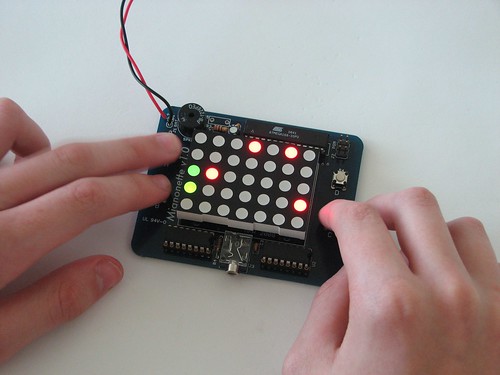 As if to prove that this is a good platform for kids to program on, our own junior mad scientist Chris Brookfield designed and programmed a new open-source game for the Mignonette, called “Attack of the Cherry Tomatoes,” now available on the Mignonette project download page.

It’s a side-scrolling action game where you are the green dot on the left hand side, trying to stop the nearly-endless march of the red dots (cherry tomatoes!) towards you. Blast them before they get to you, either with your infinite-ammo Cherry Blaster or with your precious few Cherry Bombs. Each wave gets harder. How long can you stay alive?

9 thoughts on “70 bits of gaming goodness”