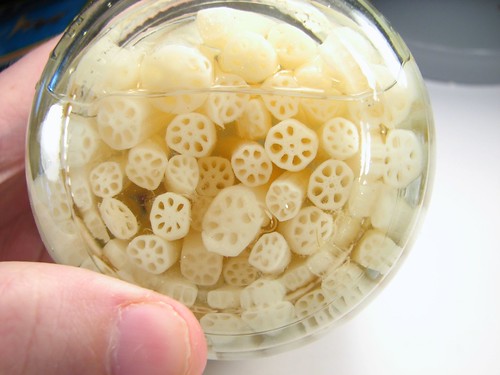 Nelumbo Nucifera, also known as the Sacred Lotus (amongst other names) is a magnificent oddity of a plant. It roots in the mud of shallow lakes and ponds, growing leaves that float on the surface as lily pads or rise up above the water on hard stalks. The lotus flower itself is the model of a classic and gracefulwater lily flower, where both the flower and resulting seed pod have a characteristic pattern of holes. 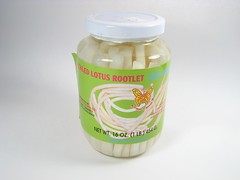 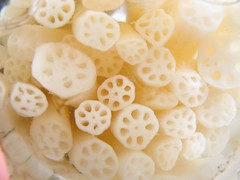 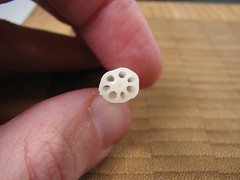 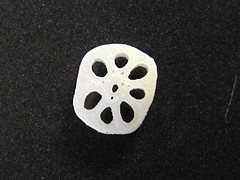 The hole patterns continue throughout the plant, showing up in in the stalks and underground stems (rhizomes) of the lotus plant. The rhizomes, usually just referred to as “lotus root” are prepared as vegetable in many types of asian cuisine. Typically you’ll find them served as thin slices through the root (a couple of inches in diameter), showing the distinctive pattern and prepared in many different ways– I’m partial to tempura. (If you haven’t had them, the taste is a bit like a more substantial and nutty version of a water chestnut.)

Another way that you can sometimes find lotus root prepared is as pickled lotus rootlets, which are immature and more tender lotus roots in brine (pictured here). You might find these in a salad or Vietnamese sandwich— they are tasty like their bigger friends.

Appearances aside, the first bizarre thing about the Sacred Lotus is that it’s one of only a handful of known plants that displays “warm-blooded” behaviour: It actively regulates the temperature of its flower to be at a near-constant temperature, even as the ambient temperature varies by a much larger amount. (

The second thing, which I haven’t seen written about anywhere, has led me to ask: how can a lotus root be like a spider?

If you bite into a lotus rootlet you’re sure to notice this: a set of wispy strands of silk seem to come out of nowhere. Where do these come from? The obvious guess would be that they’re plant fibers— after all lotus roots do have a fibrous outer husk, but a quick experiment will show otherwise. Begin by taking a short segment of lotus rootlet and scoring– cutting it partially– it so that the two halves can snap apart. Then, pull the two halves apart and watch what happens: 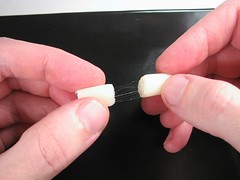 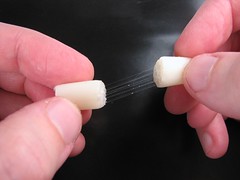 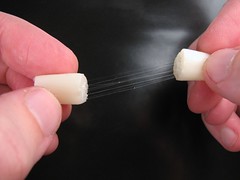 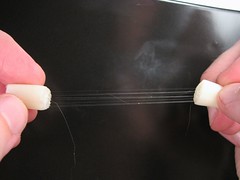 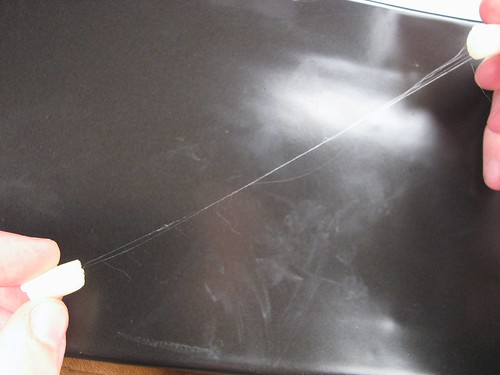 Any plant fiber running down the length of the rhizome would be trimmed down to an inch or so when we cut the rootlet to size. And yet, the fibers drawn between the two pieces can stretch out to many times that length. The only explanation that makes sense to me is if this is not really a fiber that exists in the lotus root, but is instead a chemical– a polymer– that stretches into these strings when given the opportunity.

With a little more care to the preparation of the rootlet– carefully scoring around the entire outer husk, you can pull many more fibers: 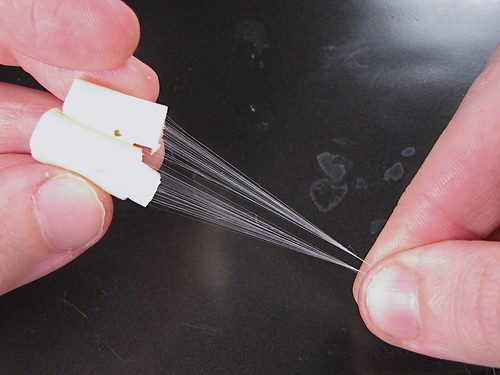 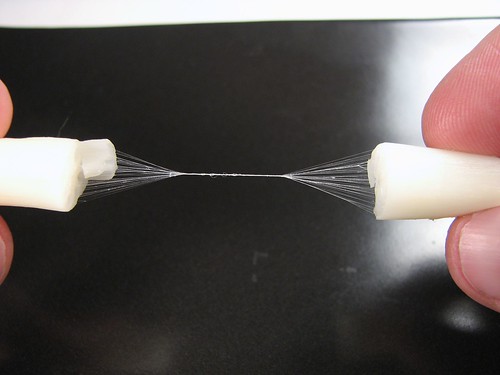 The fibers turn out to be quite strong and flexible– probably the best model that I’ve yet seen for how spider silk behaves. Independent strands of the twisted fibers can be used to lift the rootlets or other strands– they do not obviously stick together and it might be possible to even weave a fabric out of it. My impression is that the same strands occur with full-size lotus roots, although it may be harder to identify and observe them since the roots are usually much tougher and need to be cut cleanly with a knife.

So, here are some questions:

In any case, pickled lotus rootlets are cheap and you can probably find them at your local asian or indian market. It will only cost you a couple bucks to pick up a jar to play with– and if you get bored, you can always eat them.

This entry was posted in Nature, Play with your food, Science and tagged food, science. Bookmark the Permalink.

13 thoughts on “Another oddity of lotus roots”