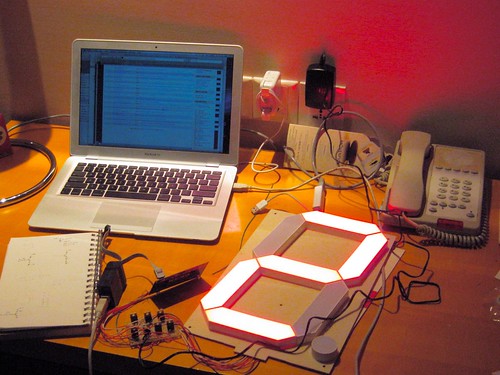 As part of the China trip last week, we had a little scavenger hunt, where the challenge was to build something with parts and tools acquired at the electronics markets.
Here’s what I found: a single-digit seven-segment LED display with twelve inch digit height. (Whoa!) 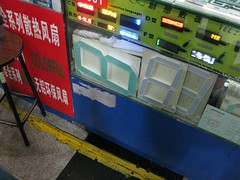 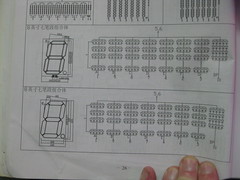 When I came across this display, it was in the display case of a vendor at the SEG electronic market– it was too tall for the display area so they had to put it in sideways, next to the 8″ displays. (It’s the one with the green protective film.)
I’m guessing that they don’t sell too many of these because they didn’t have a datasheet handy. They showed me some similar displays in their catalog, indicating how each segment is wired up, and somehow communicated to me that the internal wiring of the 12″ digit segments had 15 x 4 LEDs: four LEDs in series, fifteen times in parallel. While that would be nice– meaning that it could be run off of about 9 V DC, it seemed a little improbable, based on what I know about big LED displays. So, I shopped around and got both a 12 V power supply and a 24 V power supply, just in case. 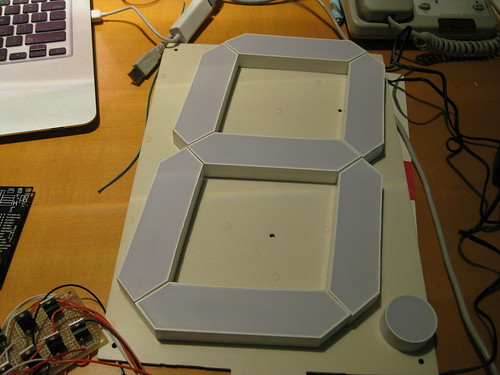 Each segment of the display is an independent piece of molded plastic, on a huge but inexpensive circuit board. The circuit board is mainly just a mechanical fixture to hold the segments in the right places. 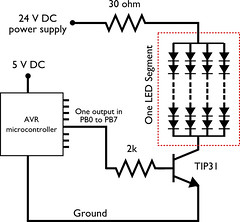 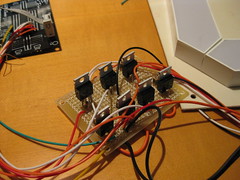 WIthin each segment is indeed a 15×4 array of superbright red LEDs, but it turned out to be 15 in series by 4 in parallel. It runs okay at 100 mA, which takes about 21 V across the LED part. (Good thing that I picked up that 24 V power supply.)

My driver circuit is shown above on the left– an AVR microcontroller just turns on the transistor to drive the segment. On the right, a photo of the seven transistors on a little protoboard. I put it all together with a $3 soldering iron.
Tom Igoe (or possibly someone borrowing his camera) managed to take several good photos as we all worked together building things late at night in a bar at the hotel. 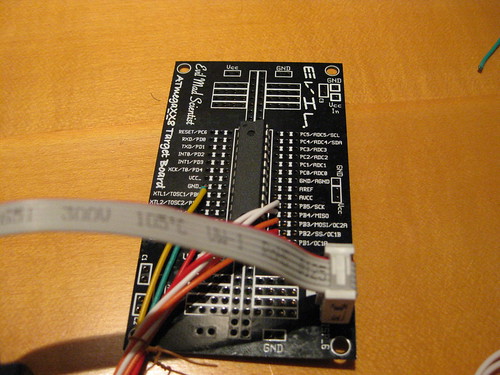 Here’s the microcontroller part of the setup. I used one of our target boards to just drive the seven transistors as GPIO outputs. The ATmega168 was purchased locally. There’s nothing on this board except for the microcontroller, the programming header, and the wires to the transistor drivers. Power was provided by USB, through my USBtinyISP.

(Note: the scavenger hunt rules were a bit nebulous, but it had been agreed upon that everyone was allowed access to Arduino-class development tools.)

And it’s almost painfully bright. You can see the wall being lit up by the pure red glare, while the segments themselves,also pure red, only give washed out colors on a digital camera. Not a problem: you can always turn brightness down. :)

Embedded video #1: A “hello world” demo put together in the hotel room in Shehzhen: 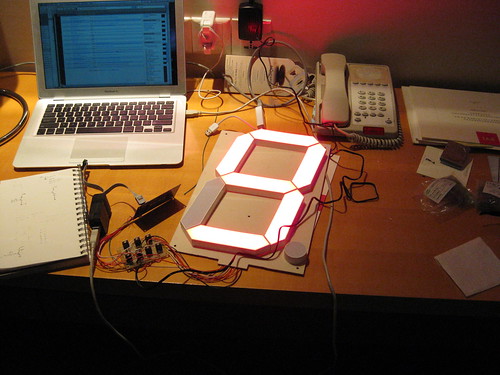 Embedded video #2: A demo put together back home in California: A single-digit clock. 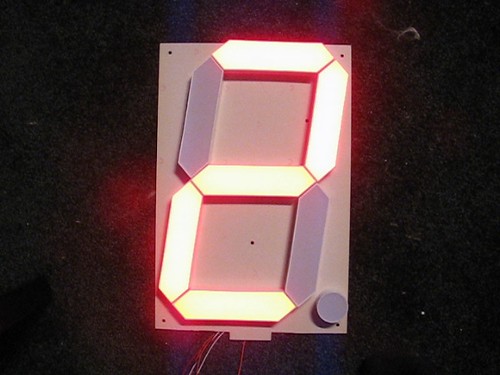 There’s some interesting potential here. (Of course, maybe six in a row would look better).

Finally since everyone else has been as excited about these as we are, we now have 12-inch LED displays available at our web store. Woo!