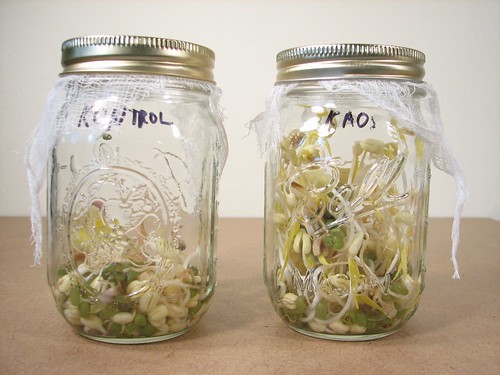 Ask any group of mad scientists how they plan to take over the world, and one of the answers that you just might hear is “With giant monsters!” And rightly so. Mucking with the workings of life itselfis one of the key skills in the mad scientist’s arsenal.

Of course, we need to start small. The easiest way to begin is by experimenting on plants. Not only is it much less expensive, but your laboratory will remain more pleasant to work at, since PETP protestors tend to be fewer in number than those from PETA.

Plant growth, in all of its different aspects, is regulated by a complex system of hormones (signal chemicals) that are responsible for phenomena as complex as geotropism and phototropism, rooting and branching, dwarfism, and seed dormancy. It turns out that many of these chemicals are actually used in horticulture and are relatively easy to obtain.

One of the most interesting chemicals to play with is Gibberellic acid, a well-known and easily available plant hormone that can be used to stimulate growth. It is available in liquid form from United Nuclear, and can induce frankly absurdgrowth in many types of plants.

In order to see results quickly, it’s nice to start with a plant that grows quickly. We chose to experiment with mung been sprouts, which ordinarily reach maturity (from a particular salad-eater’s perspective) in about five days.

The technique we are using is based on guidelines from the Institute of Food and Agricultural Sciences, University of Florida. We tested the method prior to experimentation, and found the results to be tasty. 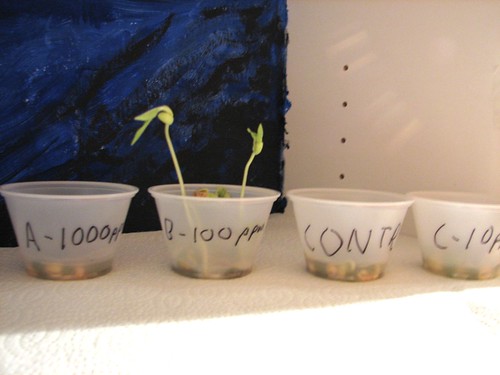 We had assisted with an earlier experiment (shown above) comparing various concentrations of Gibberellic acid where 100 ppm was a clear standout, so we’ll be using 100 ppm for our experimental sample. 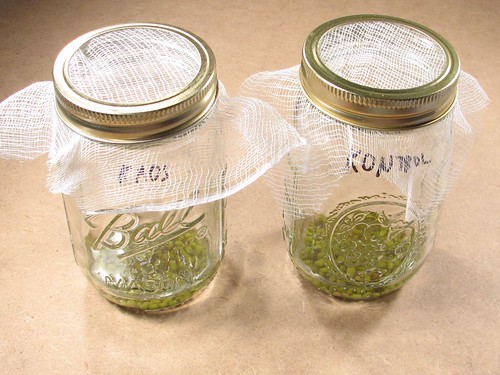 For the control sample (marked Kontrol) we soaked one tablespoon of washed and sorted beans in water for twelve to eighteen hours. We then rinsed the beans and poured off the excess water twice a day. For the experimental sample (marked Kaos) we did the initial soak in our 100 ppm Gibberellic acid solution. Twice a day we rinsed, first in water which was drained off, then in the Gibberellic acid solution, pouring off the excess. Both jars were capped with cheesecloth and stored in a dark cabinet when not being rinsed or photographed. 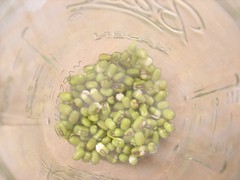 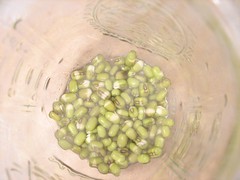 After a day, there isn’t much visible difference between the groups. It looks like fewer of the control group (on the left) are showing signs of sprouting, which isn’t surprising, as Gibberellic acid improves germination. 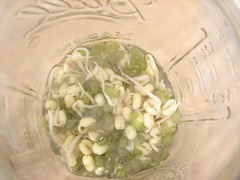 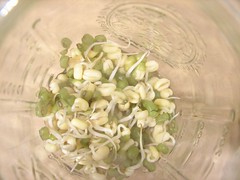 On day three, there are more and longer sprouts in the experimental group (on the right). 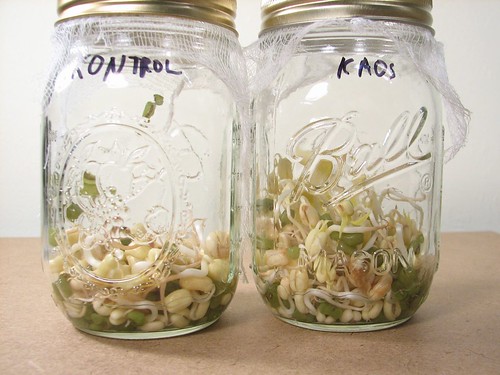 By day four, the volume of the control group is only half that of the experimental group.

On day five, the experimental sprouts are definitely trying to escape. Sprouts are normally eaten on the fourth or fifth day, but we don’t recommend eating the sprouts treated with Gibberellic acid (see MSDS). 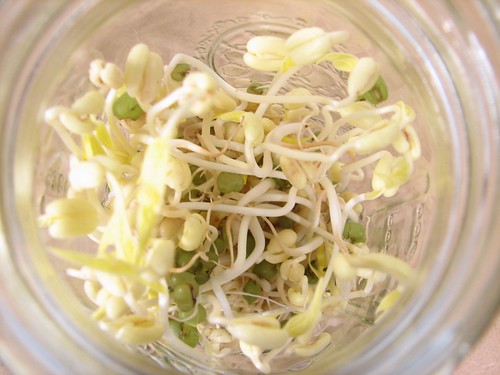 From here, it’s only a hop skip and a jump to making your very own giant monster. (Which is good bonus points if you live in New York or Japan.)

This entry was posted in EMSL Projects, Science and tagged science. Bookmark the Permalink.