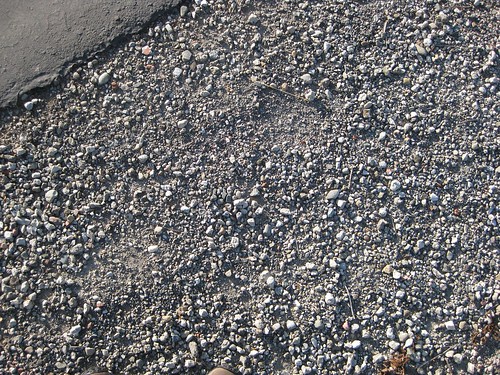 The shadow opposition effect is one of the most common optical phenomena, and once you know what it is, you might start seeing it everywhere. The photo above shows some ordinary gravel on the side of a bike path. Things get more interesting if you look at the same area from a different angle: 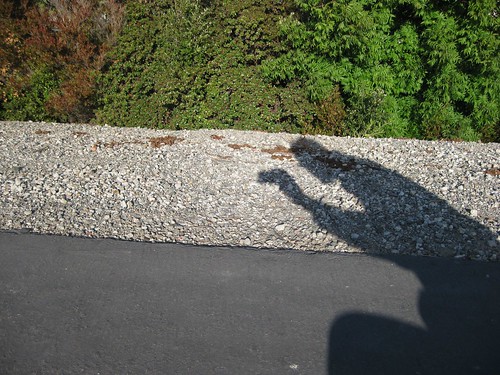 This photo shows the same gravel, but a few feet from the side, and we are now looking at the shadow of the camera. Immediately around the shadow, there is a subtle but distinct brightening of the image. This brightening gives the appearance that the gravel there is lighter in color, when in fact it is not. This is the shadow opposition effect, which is where the gravel near the antisolar point appears brighter because it contains more sunlit surface and less shadow than the gravel off to the side. This is sometimes described as “shadow hiding” — since you don’t see the shadows on the ground near your own. 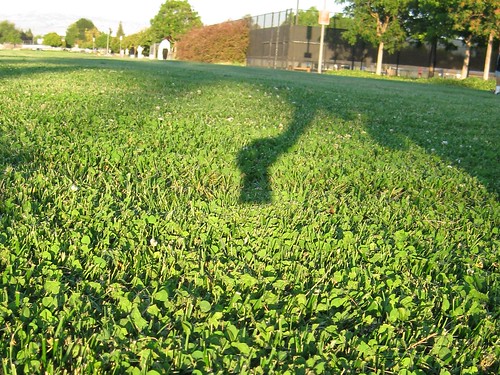 At this park, it’s a little easier to make out the individual shadows from the clover and grass, so you can really see the “shadow hiding” mechanism at work– it’s easy to see that the grass itself is not a brighter color near the shadow of the camera. [Aside: It’s important to note that the shadow opposition effect is only the most common of several opposition effects. In a fog, cloud, or mist, glories can appear around your shadow. When larger drops of water are present– such as on dew-covered grass– Heiligenschein can produce a true backscattering effect, where the appearance is similar to the shadow opposition effect. A more obscure opposition effect called coherent backscattering may be responsible for the high brightness of the full moon.]

The examples that we’ve seen thus far have been rather planar, but here is a more three-dimensional example: 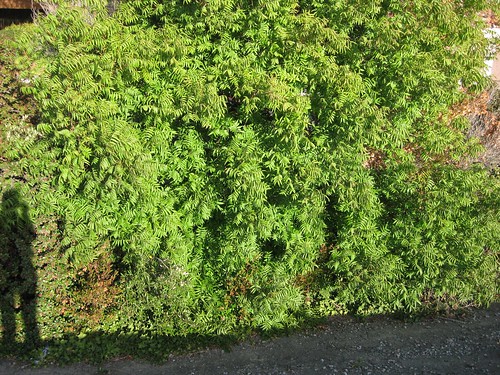 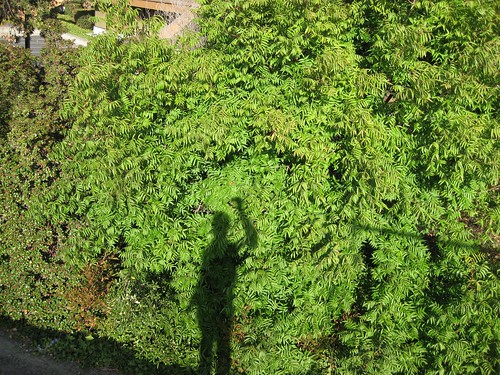 On the first photo are some bushy trees, photographed from the side. In the second, we’ve moved the camera so that the same part of the bushes are now at the antisolar point from our camera. Even though the position of the leaves is so irregular, the effect is still clear.

Taking it a little further yet, here’s a movie– taken on a bike ride –showing the shadow opposition effect over different textures and distances. (The video is embedded below, if you can’t watch it here, you can click through to see it on youtube.)
This entry was posted in EMSL Projects, Science and tagged science. Bookmark the Permalink.