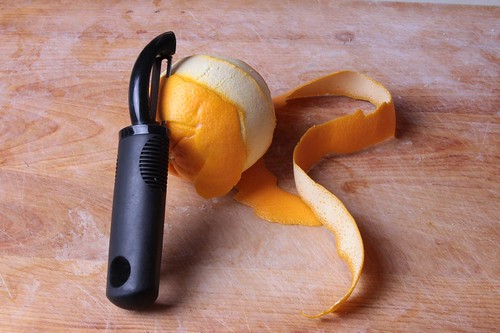 While trying to figure out what to do with about 75 pounds of fruit that our citrus trees bestowed upon us in January, we came across an interesting fact: marmalade is really easy to make. People of older generations may know this already, but so far as we knew, marmalade was one of those mysterious things that strictly comes from a jar. It turns out that all you need is citrus fruit, water, sugar and some time on the stovetop.

The first step is to peel the fruit. We’ve made lemon, lemon-orange, and orange marmalade, but you can use pretty much any citrus fruit.

We looked around a bit and settled on this recipe primarily because of its simplicity. It scales well. For a large batch, just keep peeling and cutting fruit until the pot is full or your hands were tired. You can also scale down–grab a couple of oranges from the cafeteria and you’ll make a lot of friends in your dorm kitchen. 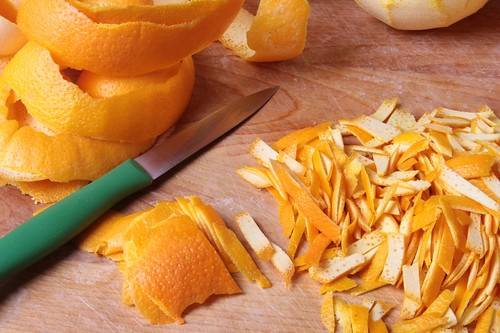 The peels need to be cut into little slivers for the appropriate texture in the marmalade. If you stack up the pieces, you can cut a bunch at once. 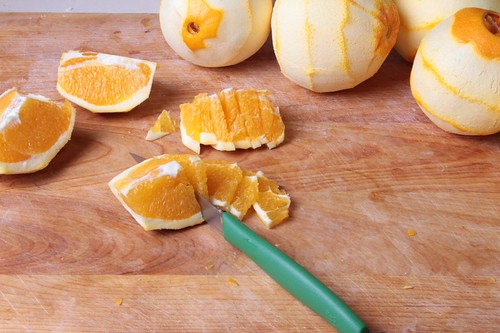 Some recipes call for a blanching or soaking stage. The primary purpose of blanching is to remove the bitterness from the pith and peel. We like bitter marmalade, so we left in most of the pith and didn’t soak or blanch the peels or fruit. That also keeps the recipe simple– just slice up the fruit and throw it in the pot with the peel pieces. 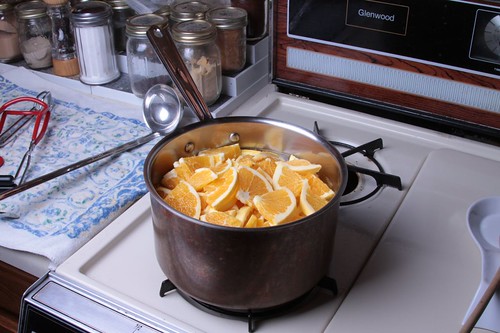 The fruit and peel are cooked in water until they’re good and soft. It takes a while (about an hour), but once you’ve got a nice simmer going, you can ignore it pretty well. 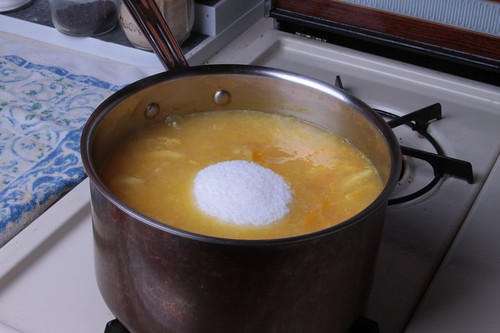 The sugar goes in. Lots of sugar. The original recipe calls for 4 cups of water and 4 cups of sugar (with ten lemons). The 4 cups of water barely covered the raw fruit (in a saucepan with roughly equal depth and diameter). For scaling the recipe up or down, you can use that as a rough guide: pour in water a cup at a time until the fruit is almost covered, then once everything’s soft add as much sugar as you did water. 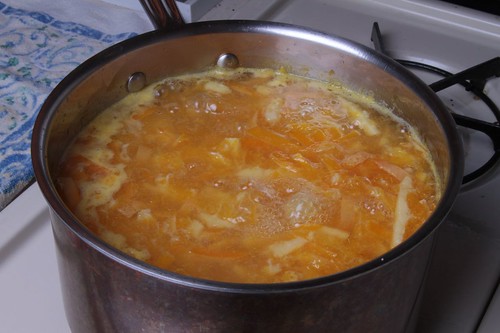 Stir in the sugar, and bring it up to a boil, stirring regularly. 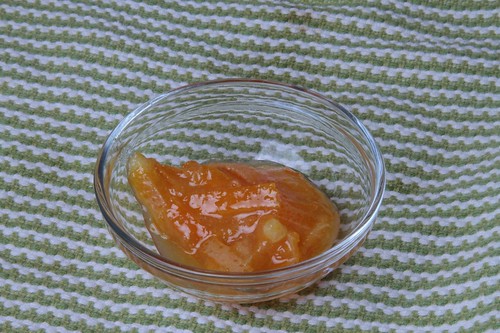 The original recipe says to cook it until it’s 220 degrees fahrenheit. If you’re one of the few with a well-calibrated thermometer, congratulations. For the rest of us, put a spoonful of the proto-marmalade on a cool plate. If it’s still runny after cooling for a minute, keep simmering a little longer. It should show signs of jelling after cooking for 45 minutes to an hour. 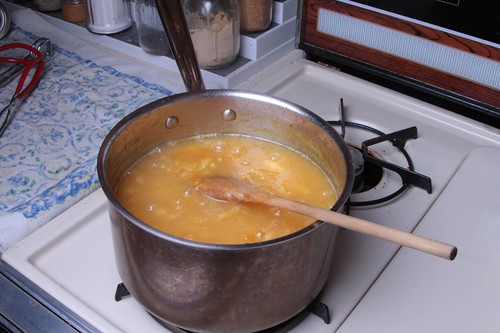 That’s it. You’ve made marmalade! 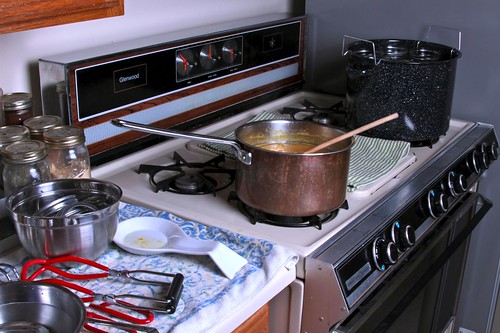 But now you’re wondering what to do with it. We recommend spreading it on a freshly toasted english muffin. Or maybe a crumpet.

You can put the rest of it in a bowl, let it cool, then keep it in the fridge and use it. Or you can can it. Canning is not as scary as it sounds. You pour the warm marmalade into warm jars, wipe the rims clean, put a clean lid and rim on them and boil the jars covered with water for 15 minutes.

There are lots of kinds of canning setups but the simplest is a pot with a spacer to keep the jars off the bottom. While you can get dedicated canning kettles with jar racks inexpensively, you don’t really need any special equipment. Rules of thumb: your pot needs to be deeper than your jars so you can cover them with water, and the jars shouldn’t rest on the bottom of the pot, so as to avoid thermal stress. You can put a small wire cooling rack, a vegetable steamer, or an array of skewers tied together in the pot to keep the jars off the bottom. 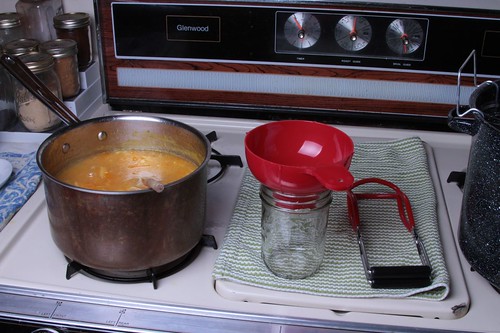 After boiling the jars, you can ladle out some of the water and lift your jars out with an oven mitt. However, a set of jar lifting tongs doesn’t cost much and makes that step easier. A wide mouthed funnel is nice since it keeps stuff of the rims of the jars, but is also not necessary, especially if you get wide mouthed jars.

The folks who make Ball jars have some nice overviews (pdf) of canning techniques. 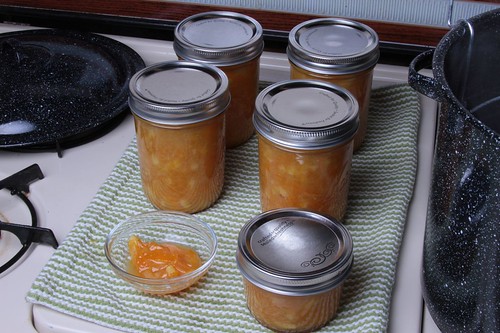 You may recognize our technique as one common in mathematics. We have reduced a difficult problem (what to do with 75 pounds of citrus) into a problem whose solution is well known: what to do with many jars of marmalade. QED.

This entry was posted in EMSL Projects, Play with your food and tagged food, marmalade. Bookmark the Permalink.

80 thoughts on “Marmalade is way easier than it looks”