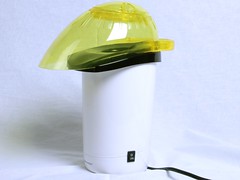 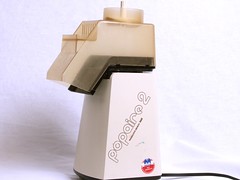 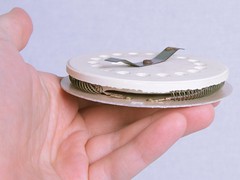 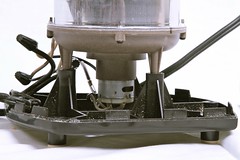 I never really set out with the goal of roasting my own coffee beans, it just kind of happened.

It started a month ago when we got a coffee grinder. Naturally we started getting whole bean coffee, which we used at a rate of about one pound per week. While I’m not (by any standards) a coffee connoisseur, I found myself noticing that the first pot of coffee out of the new can really was just betterthan the last pot of coffee out of the old can– meaning that the coffee quality does actually decline noticeably after just a week.

Now, that’s a minor annoyance, and hardly cause for action. But, two weekends ago I happened to be browsing in a home brewing store (needed champagne yeast– that’s another story) where there were sealed bags of green coffee beans just sitting there on the shelf. Fair trade, organic, and in a number of varieites. Only 5 bucks a pound. So what the heck, right?

It turns out that there’s a common and cheap method of roasting coffee at home: using a regular air popcorn maker. You put the beans in the popper as though they were popcorn kernels, heat them for a few minutes until they’re properly roasted, and then cool them. (You can read the details of this process here, here, here, and here, amongst other places.) This is kind of neat because it doesn’t take much in the way of equipment and it roasts just enough for a big pot of coffee.

The weak point in the popper method is the cooling. The beans keep roasting as long as they are still hot, so many of the sites suggest pouring the beans back and forth between a couple of metal colanders until they cool down. We tried it, and while it did cool them faster than a cookie sheet, it was more tedious than fun. It also seemed a bit silly to use this nice semi-automatic roaster and then turn it over to a manual process for the next few minutes. So, here is our better (if somewhat obvious) solution: a dedicated coffee cooling tower, built from a second modified air popper.

For roasting coffee, it’s better to have a specific type of air popper, one that has the heater vents on the sides the roasting chamber, rather than one that has a mesh or bottom vent for the heat. You can read more about this in Sweet Maria’s guide, which lists several poppers of this variety. 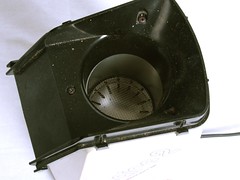 So, after we first picked up those green beans, we immediately went to eBay and bought an old Popaire 2, which is one of the models that Sweet Maria’s recommends.

And… then we got it. It turns out that it’s actually one of the “bad” mesh-bottom models. (Doh!)

We tried it, and indeed, it was pretty questionable. Also: it doesn’t have a power switch. (Doh, again.) 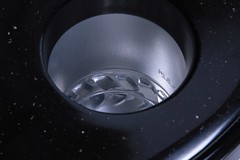 Since that was something of a bust, we did some more research and found that the Toastmaster 6203 Popcorn Popper is one of the correct variety and is actually available new from Amazon.com. After a couple of tries, this one works like a champfor roasting coffee. For a few reasons, we found that it works much better with the yellow lid removed. The disadvantage is that the chaff (papery coffee husk material) flies around a bit. But it’s easy to clean, there isn’t usually much of it, and it lands in an eight-inch circle around the machine.

(For proper irony: We had one of these exact poppers a few years ago, but got rid of it because it’s a *terrible* popcorn maker. I wish we had kept it– it’s a *great* coffee roaster.)

Of course, using the Toastmaster for roasting coffee left us with the extra mesh-bottom Popaire 2, ready to convert to a cooler.

So what’s in a popcorn maker? Obviously there’s a heater and a fan. Can we just disconnect the heater and hook up the fan alone? There’s one way to find out. 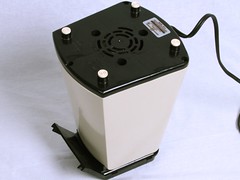 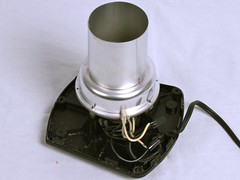 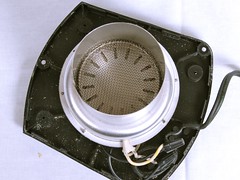 Fortunately, the whole machine is held together by a few sets of screws and comes apart easily. Once the outer case is off, you can see that the inside consists of an aluminum vessel– which normally holds the popcorn — with a high-temperature plastic base, a motor below that, and then the outer black base of the popcorn maker. 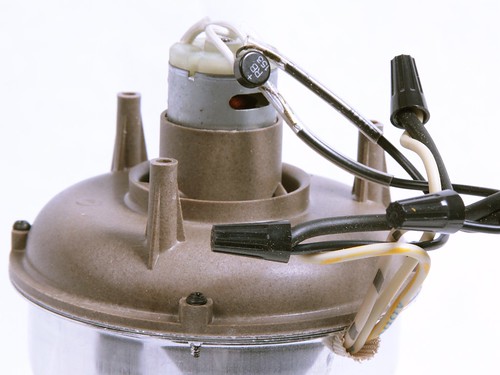 After removing the outer black base, you can see that the fan motor is driven through this part labeled RB153; which is a 1.5A 200V rectifier bridge. This type of motor is an inexpensive type that requires DC current to operate. A rectifier bridge like this converts AC to (poor) DC in a process called full-wave rectification, so that the motor can run.

There are other wires here too. Some are leading into the plastic base, so let’s look in there as well to see what’s going on. 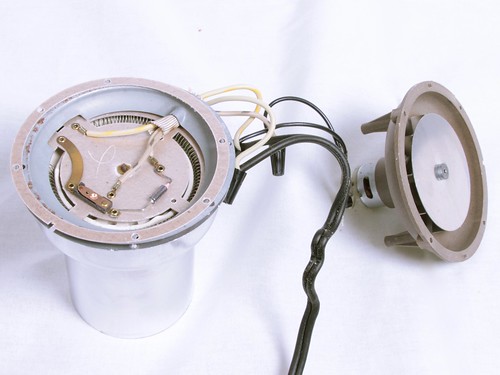 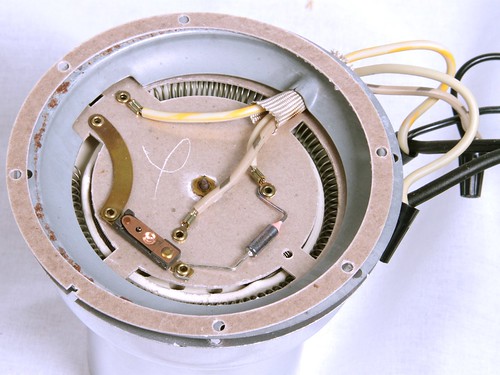 The bottom right component, with the silver cylinder and the pink cone, is a thermal cut-off (safety) fuse. To the left of that is the thermostat; it’s stamped “150 C” on the side.

There are also two coils of heater wire beneath the board. It’s relatively straightforward to map out the circuit and see what we find:

The thermal fuse protects the whole circuit from overheating– if it goes, the popcorn maker will be fully dead. Whether or not the thermostat is open, the 75 ohm heater coil will always be dissipating power.
The thermostat can be used to turn on or off the *big* 15 ohm coil, depending on the temperature inside. The rectifier bridge is used to drive the motor, but is in series with the 75 ohm resistor.

From the standpoint of our mod, this is a minor setback. If we snip out the thermostat and/or 15 ohm heater coil, the motor will still run, but there’s a 75 ohm coil used to (1) generate heat and (2) drop the voltage to a suitable level for the DC motor. It’s not as big as the other coil, but we probably don’t want to leave any heater coils at all running in our cooler. 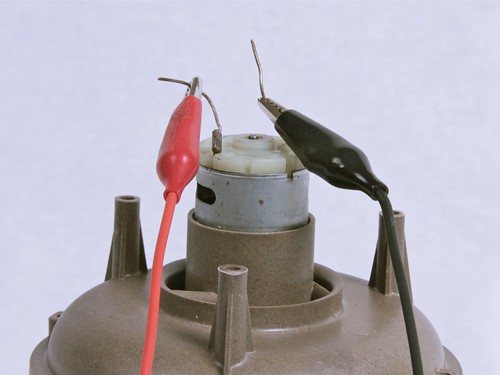 A solution is to drive the motor independently from DC, from our own power supply, and completely ignore the original circuitry. With a benchtop power supply, it looked clear that the motor can run well at 12 V, albeit slightly slower than when running off of AC. 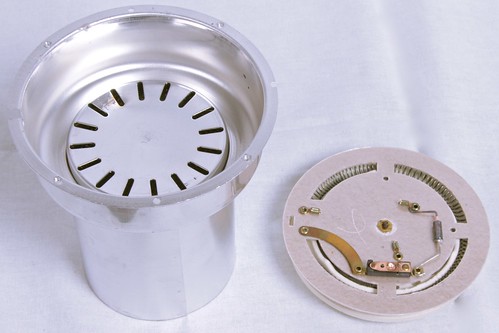 Since we didn’t need it, we took out the assembly with the heater coils parts and set it aside. This has the added benefit of improving air flow from the fan to the coffee beans.

Next, we hook it all up and put it back together. 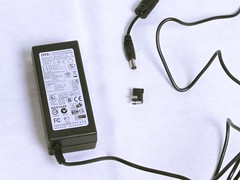 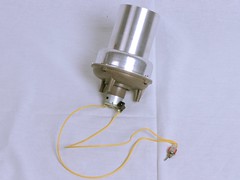 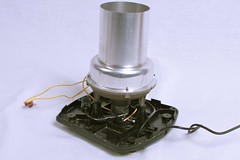 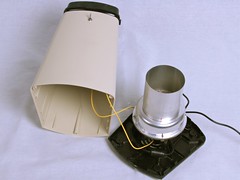 We took a 12 V DC power supply that we happened to have hanging around, and soldered up a matching jack across the motor, along with a power switch– for a real improvement over the original. 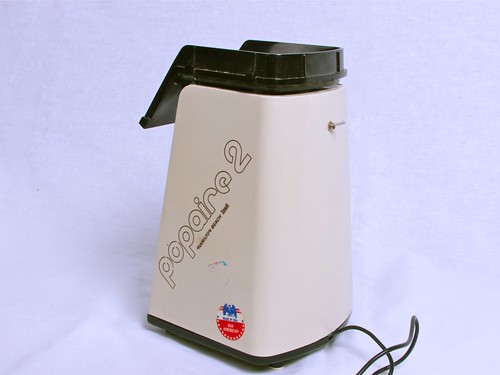 And there it is, all completed, with the 12 V power cord coming out of it now.

To use the cooler, roast beans normally, then pour them from the “roasting” popper to the “cooling” popper, with the fan on.

The heat transfer from the beans to the air coming out is surprisingly efficient– the air over the top when the beans are still hot is flaming hotso watch your hands above it. The beans come to room temperature in a minute or two, which is ultimately comparable to the two-colander method that we were using, but it’s slightly easier and more reliable.

And it makes pretty good coffee.

This entry was posted in EMSL Projects, Play with your food and tagged coffee, diy, drinks. Bookmark the Permalink.