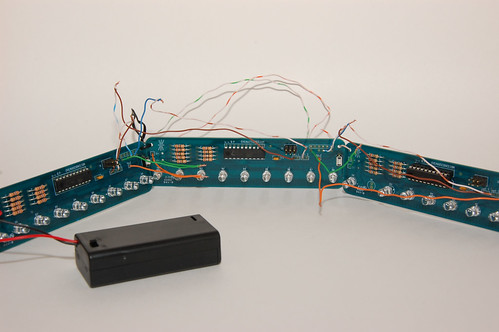 “The Larson Scanner rocks, but it’s too short!”

“How can we expand the Larson Scanner?”

“Can you link multiple Larson Scanners together?”

These are just some of the questions that I have asked about the Larson Scanner.
And now, there’s an answer, in my first guest blog post here on Evil Mad Scientist Laboratories! 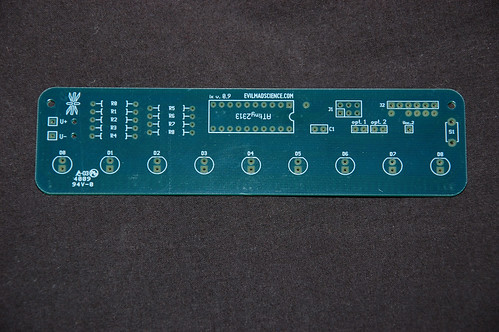 Here we have the humble “ix v 0.9” board, used for both the Larson Scanner Kit as well as the Deluxe LED Menorah Kit. It’s a great board, and one of its biggest benefits is the addition of a section to solder on an ISP programming header as well as breakout sections for some of the unused pins on the great ATtiny2313 chip.

To make your Larson Scanner expandable, some minor changes are necessary. Some of these are wiring changes, some are programming changes, but all changes should be fairly easy to make to either a completely assembled Scanner, or a fresh, unassembled Scanner (it should go without saying that starting from scratch will be a bit easier in the long-run).

Here is an image showing some of the changes we will make, and the additional spots we will be using on the board. Click on the image to see the original, which is much easier to read.

The basic idea behind the expandability is this:

How do we do this? Well, we’ll need a new program (available for download here), a way to get it onto the chip, and we’ll need some wiring changes. The new program is intended for use with AVR-GCC and an AVR ISP programmer, such as the USBtinyISP. To re-program the scanner, you can either add a 6-pin header to the Larson Scanner itself, or use an ATtiny2313 Target Board or Development Kit with ZIF Socket to re-program the chips before they’re installed on the board.

In the mean time, let’s take a look at a close-up of some of the wiring changes on the right-hand edge of the board. 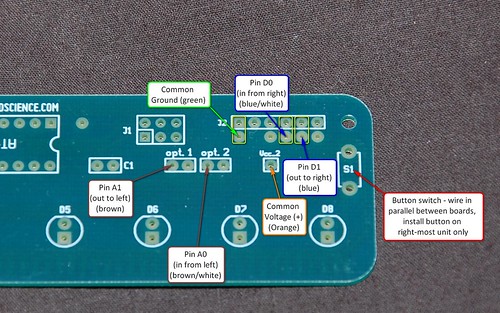 The basic wiring is fairly simple. I used an old ethernet cable that I had lying around, which was already missing an end, and cannibalized it for its twisted pairs. This is a great source of small wires for these sorts of projects, and the fact that there are 4 different colored pairs makes it fairly easy to create a wiring color scheme that makes sense.

One of the things to keep in mind is that, in order to “send” a signal to a different board,
the boards must share a common ground. And, since we can power 4 or 5 Larson Scanners on a single pair of AA batteries, we can also share a common positive voltage across the units, eliminating the need for multiple battery packs.

To terminate the end of the chain, tie the output of that end (blue to blue/white on the right, brown to brown-white on the left), and the scanner will reverse course when it reaches the end. 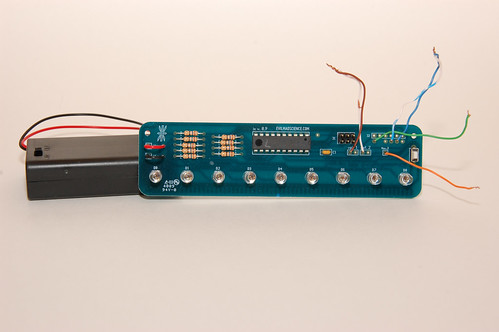 This picture shows how you would wire a single unit. Note how the blue-blue/white combo and brown-brown/white combo are tied. There is also a stray common voltage (+) and common ground (-) hanging off of the unit, so that we can connect it to a second
scanner later.

And here is a video of the single scanner.

Note how the new default behavior is to let the “eye” disappear off the edge of the unit. This is purely a style choice on my part (it IS Open Source, after all). Holding the button at startup will “soft-bounce” the eye on the edge of the scanner, although, once again, I took creative license by letting the eye parts “collect” on the edge, instead of bounce back and overlap with other eye parts. 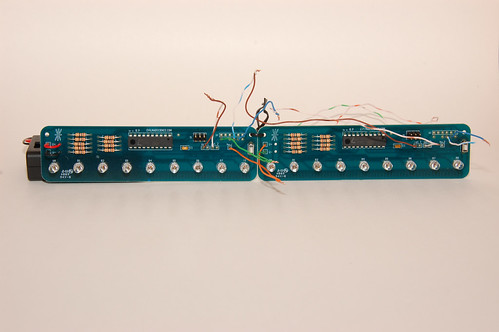 And now, of course, two units hooked together. Note the wiring, with the ends “terminated” by their respective colors, and the output of one tied to the input of the other. The final installation or use of the unit should dictate where you run your wires, of course, but they’re been placed in front of the board for ease of description as well as to work with the
through-hole design of the board.

A valid question to ask at this point would be, “but, how does the wiring tell the unit if it’s at the end of the chain?” The answer is that, technically, it doesn’t.

The new code has an initialization procedure built into it at startup that determines how the board is wired. The code latches the left-hand output, checks to see if the left-hand input has been triggered (indicating that it’s the end of the chain), and if so, it sets a flag that this is the left-most unit. Then rinse and repeat for the right-hand outputs. Other parts of the code then handle the position of the eye and determine if the scanner needs to trigger the next one in line, or simply bounce the eye back in the other direction.

Coding it this way means that the same code can be used on every single scanner in the chain, without having to re-program it any time you change the configuration.

And what good would it be to have a still image of two units hooked together without a
video of it?

And, finally, since I needed to test to see if the code and concept worked beyond two units, I grabbed an old scanner that has seen better days, re-programmed it, and wired it up. Below is video proof of concept. :)

The new source code is heavily commented, but if you have any questions, you can discuss it in the Larson Scanner Kit forums.

If you’re new to AVR programming and/or want to hack further, you might want to
start by looking at EMSL’s list of resources for getting started with AVR microcontrollers.

I had a lot of fun hacking the scanner and documenting the process, and many thanks to Windell and the rest of the EMSL crew for inviting me to write this guest post.

I hope you enjoyed this installment, and I hope you have fun making your own super-long Larson Scanners for Halloween!

This entry was posted in EMSL Projects, Engineering and tagged larson scanner. Bookmark the Permalink.

15 thoughts on “The Expandable Larson Scanner!”