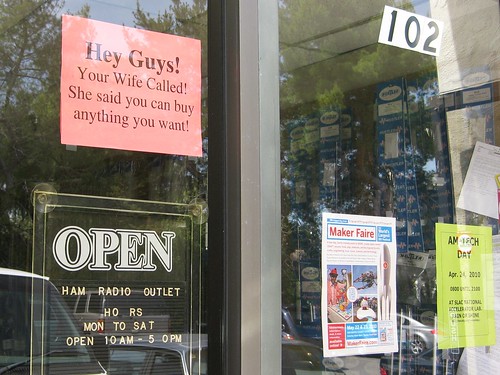 Neat-o stuff to do in the San Francisco bay area:

Next weekend, go to RoboGames, Fri-Sun, Apr 23-25, 2010 at the San Mateo Fairgrounds. It’s the worlds largest robot competition, featuring combat robots, humanoid robots, art bots, soccer bots, sumo bots, and more. We’ll be there as exhibitors, with kits from our web store and other goodies like pager motors for making BristleBots!


In May, we’ll be heading back to the San Mateo Fairgrounds for the Bay Area Maker Faire 2010— our favorite event of the year. It’s the world’s biggest DIY festival, and well, there’s just too much to describe. You have to see it for yourself. We’ll be there showing off one of this year’s Evil Mad Scientist Laboratories blog projects, the Playable game of Tabletop Pong— you can come by and try it out.

Hope to see you there!