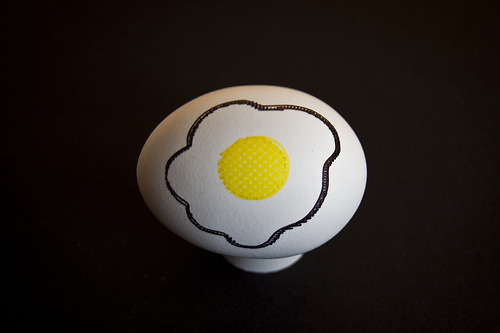 Pete over at RasterWeb! recently posted that he’s planning an Eggbot session at MadCamp. MadCamp is a BarCamp – an open-format conference where the attendees are the presenters — in Madision, Wisconsin on Saturday, August 27. If you’re near Madison and interested in learning more about the Eggbot, unconferences, or any of the other topics that will be presented, go check it out!

We’ve featured Pete’s work with the Eggbot before in our roundup of Eggbot art, and we’re thrilled to see him sharing his mad Eggbot skilz. He invites MadCamp attendees to bring files to print on the Eggbot, and his post provides a nice brief primer on what it takes to get designs sharpie-ready.
Photo by Pete Prodoehl released under cc by-nc-sa license. Egg Egg design also by Pete Prodoehl and released to the public domain.
This entry was posted in Eggbot, Everything Else and tagged eggbot. Bookmark the Permalink.